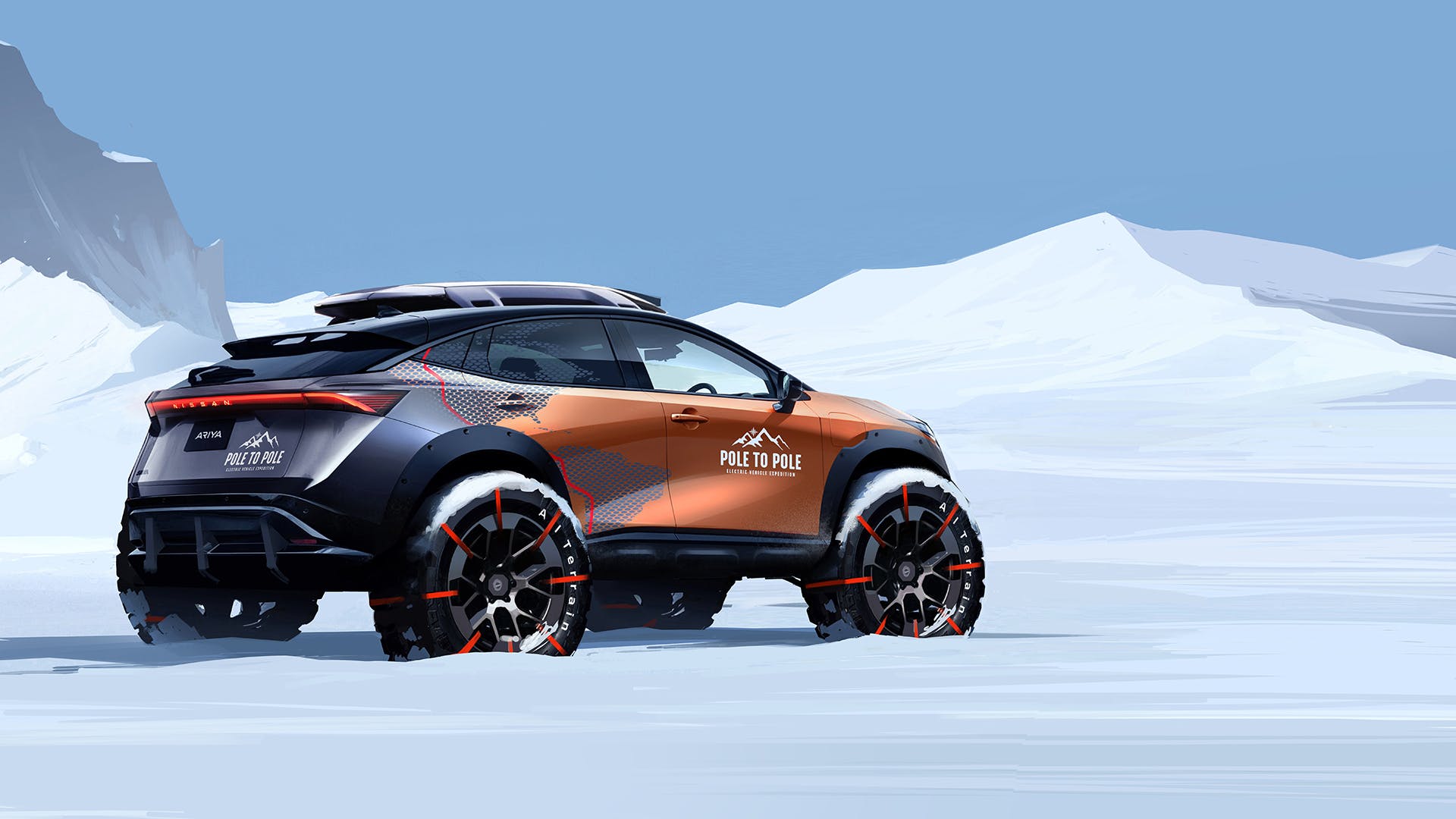 Nissan has announced a partnership with British adventurer Chris Ramsey for an adventure from the magnetic North Pole to the South Pole. Ramsey will be behind the wheel of the Japanese automaker’s latest battery-electric vehicle, the Nissan Ariya. The trip will cover 27,000 kilometers or 16,777 miles crossing several regions and continents. This will also expose the vehicle to temperature ranges of -30 degrees to 30 degrees Celsius (-22 degrees to 86 degrees Fahrenheit.

Ramsey will be the first person to drive from one pole to the other in any vehicle type. His journey will see him travel through North, Central, and South America before crossing into Antarctica.

“We’re proud to announce our partnership with Chris Ramsey and the Pole-to-Pole expedition team,” said Asako Hoshino, Executive Vice President and Head of Global Marketing and Sales at Nissan. “The all-new, all-electric Ariya crossover SUV enables you to go further, easier, and in comfort. And with e-4ORCE control technology providing enhanced stability and traction on a variety of surfaces, we know it will be the perfect partner for Chris and his team on their challenging all-electric journey.”

Nissan Ariya will drive from North to South Pole

The route for the journey will be scenic and put the Ariya through tough road conditions. It includes snow, mountain climbs, and desert driving. Nissan will modify the vehicle being used for the trip to ensure it can handle every type of terrain it encounters with most of the changes focusing on the wheels, tires, and suspension. A second bone stock Ariya will join the trip as a support vehicle throughout the Americas.

Ramsey has done multiple major trips using a fully electric vehicle across a decade. In 2017, he completed the Mongol Rally in a BEV together with his wife, Julie, traveling more than 16,000 kilometers or 9,941 miles through multiple regions over 56 days. The kicker? The couple did the trek using their personal Nissan Leaf.

This latest collaboration between Nissan and Ramsey supports the former’s Ambition 2030 long-term vision. It makes electrification a central focus and will see Nissan introduce 23 electrified vehicles by 2030. Only eight will be hybrids and the rest are fully electric. The Ariya is the first of those and it will be followed by the third-generation Leaf, which will morph into a subcompact SUV built on the CMF-EV architecture. It was previewed by the Chill-Out Concept last year, featuring a low coupe-like roofline and a front facia that gives it a family resemblance to the larger Ariya.

Nissan’s Ambition 2030 plan is part of a larger initiative from the Renault-Nissan-Mitsubishi Alliance. The three brands will introduce a total of 35 new BEVs underpinned by the CMF-EV and the new CMF-BEV platform. Nissan and Mitsubishi will also have a dedicated architecture for all-electric Kei cars designed specifically for their home market of Japan. The former will also be leading the development of lithium-ion and solid-state batteries, the latter of which is going into mass production by 2028.

The Nissan Ariya goes on sale in the U.S. market in late 2022 as a 2023 model in single- or dual-motor configurations. It will initially use an 87-kWh liquid-cooled battery pack, giving it an estimated range of up to 300 miles on the single-motor model and 265 miles on the more powerful dual-motor variant. Following the Ariya is the next-generation Leaf, which will likely be the vehicle Nissan builds at its Canton, Mississippi plant alongside Infiniti’s first BEV.