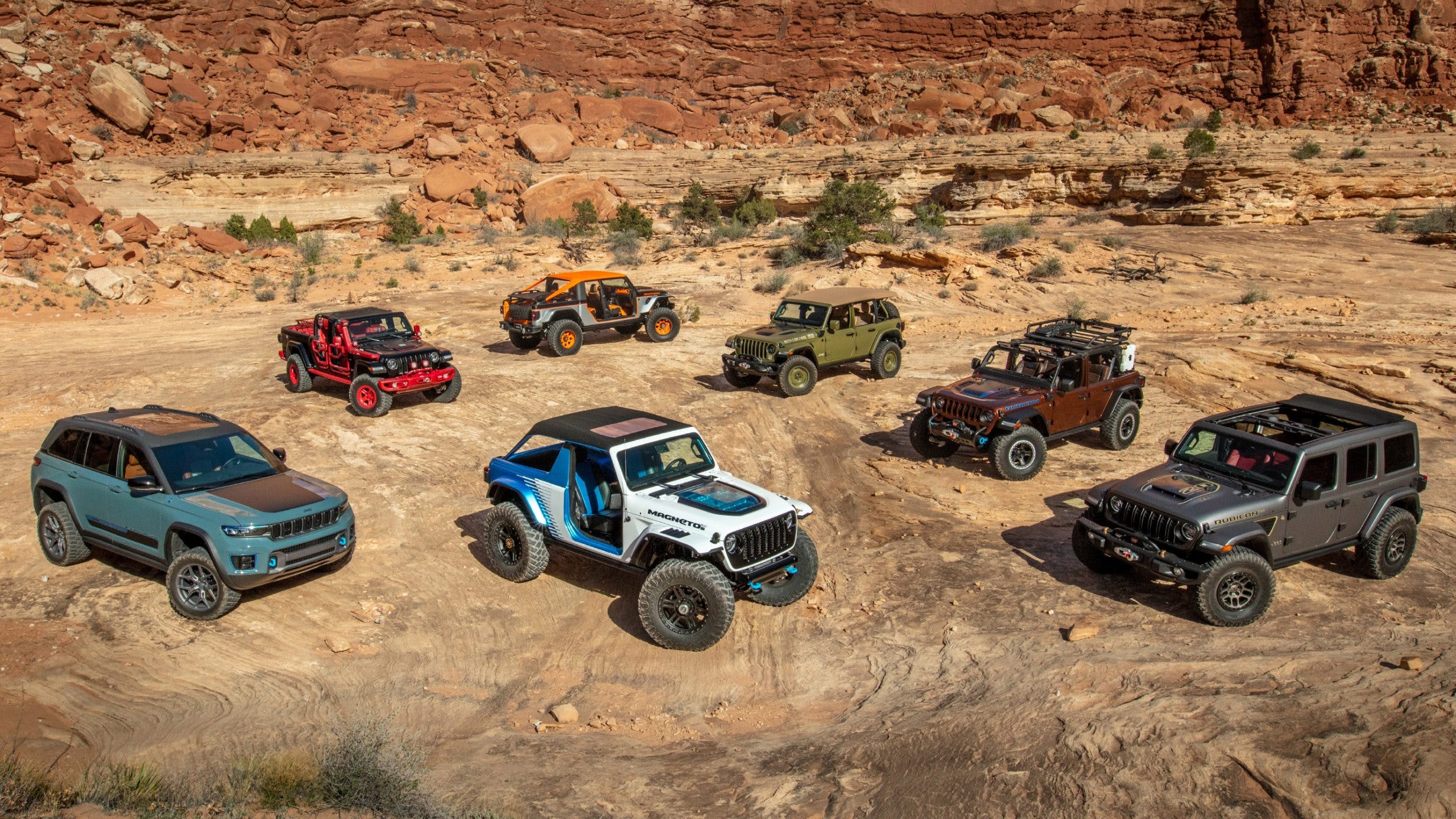 This year’s Easter Jeep Safari is almost here. As it often does, Jeep assembled a few concepts to take along wheeling in Moab. Of the 7 total concepts debuting this year, 4 of them are electrified.

Let’s start with the all-electric Magneto 2.0. Last year we saw the concept Magneto 1.0 debut, but this is a majorly updated version. It now features a 6-speed manual transmission that served in a Challenger Hellcat, beefed up to handle the power. Internally they call the transmission the “Transzilla.”

There’s a Dana 60 axle up front, and a massive Dana 80 setup in the rear. The wheelbase is stretched a foot, and at each wheel is massive 40-inch tires.

If last year’s model was a proof of concept, this year was about building a proper off-roader with better components. The manual transmission remains, which we’ll explain why in a second, and while the battery and motors are production ready, the Magneto 2.0 has serious performance. Jeep thinks it’ll go from 0 to 60 mph in 2 seconds, or somewhere in that range, though Jeep head designer Mark Allen says he hasn’t tested it yet.

That manual transmission will never find its way into a production electric Wrangler, but it does solve several engineering problems. Allen and his team wanted to make sure they could easily use the big stick axles front and rear, and they wanted to build a Jeep this year with the 40-inch tires. They turned up the performance, but they needed something that would work with the existing hardware. The Transzilla was the answer.

This is by no means a production version of anything. The batteries and motors are in, at best, a prototype stage. Like all Easter Jeep Safari concepts, the Magneto 2.0 is completely drivable, and will be driven this year at Moab. But there’s still a way to go before one rolls off the assembly line at Toledo North.

Like many executives, Allen doesn’t talk about future product. But during his presentation in Auburn Hills to select media, he did mention that the “response was awesome” to the concept last year, and that electric off-roading is “the responsible future.”

At this point we believe it’s not a matter of if we’ll see an all-electric Jeep Wrangler, but rather if it’ll exist on the JL platform are be apart of the next redesign. But we feel it’s definitely coming.

We recently spent time in the Jeep Grand Cherokee 4xe, including the Trailhawk model, but we aren’t yet allowed to talk about that experience. But we can talk about this Moab concept that takes advantage of the GC’s air suspension to raise it up a bit, throw bigger wheels and off-road tires on it, and then paint the roof of the rig with spray-in bed liner.

The bed liner helps protect the roof from scratches if you frequently carry skis, canoes, or other things on top of your car.

This concept is striking in person, and one of our favorites from the lineup.

The Jeep ’41 Concept is an army green throwback paying homage to the history of the brand. It’s based on the Wrangler 4xe, and has some cool features like a digital camo seat material, and army green accents inside and out.

It’s a lightly modified vehicle, showcasing what you could potentially build yourself with some creativity and a little bit of time.

The folks at JPP got to have some fun with the Birdcage Concept, based on top of a Wrangler 4xe. The idea behind the concept was to make it the ultimate open-air Wrangler experience.

The Eagle Brown exterior is accented by Surf Blue highlights, giving this rig a unique look. Among the ton of upgrades to the Birdcage, the wider fender flares incorporate DRLs and are the first 50-state legal setup that meets tire coverage requirements.

Obviously the Magneto 2.0 is the star of the show, but there’s a lot of cool things happening in Auburn Hills when designers and engineers get to have fun.

While none of these vehicles will ever seen production, Allen is quick to point out that many of these ideas enter production at some point based on feedback from the enthusiasts who hang out with them in Moab.