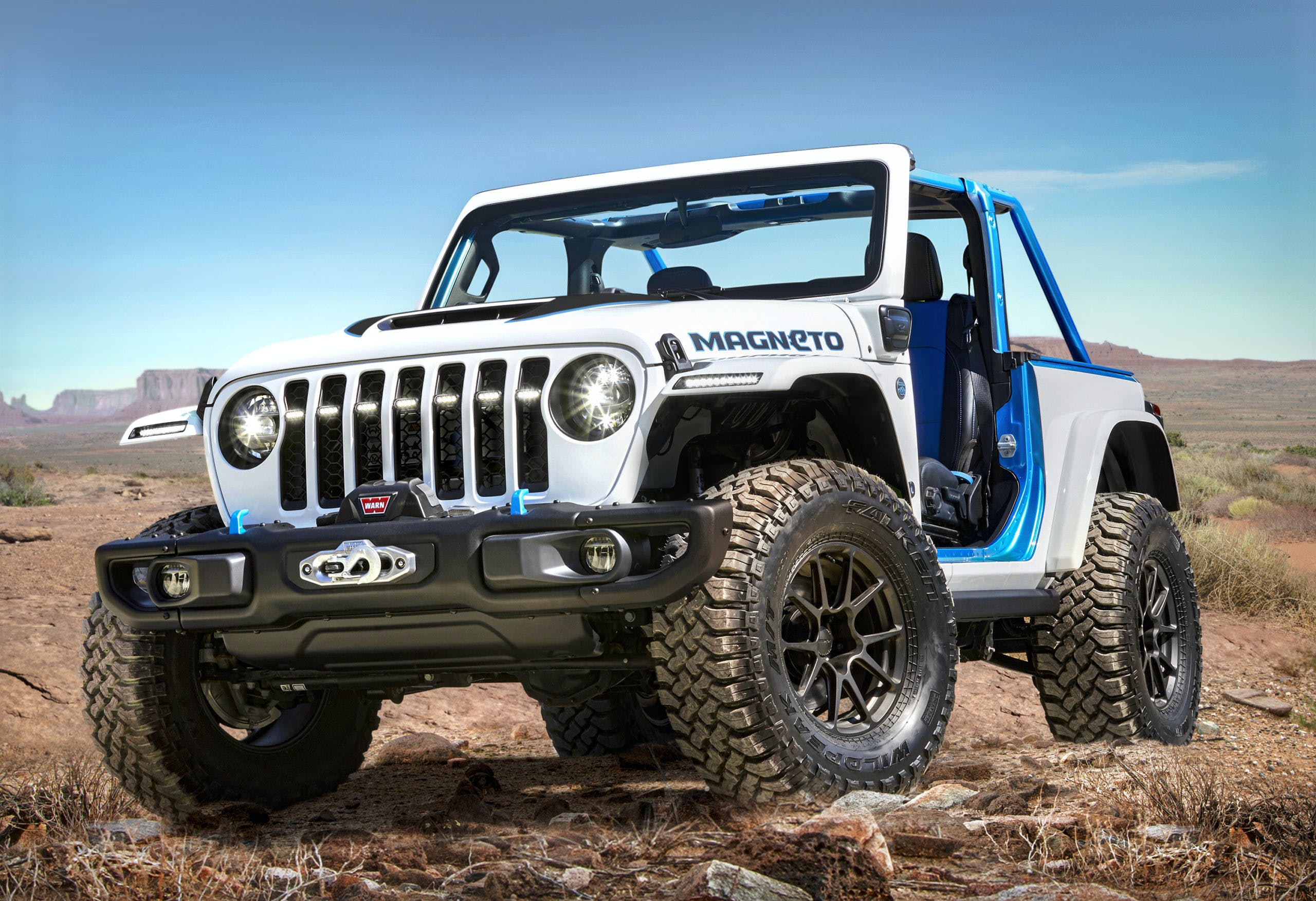 Every year, Jeep builds some crazy concepts to take out to Utah for the annual Easter Jeep Safari. Some of these concepts are wild, never-make-it-to-production one-offs, while others give us an indication on where the brand is heading in the future.

This year, one of the concepts is called the Magneto. It’s an all-electric Jeep Wrangler Rubicon 2-door.

During a presentation to media prior to going to Utah, Jeep gave us all the details about this prototype electric Wrangler. Here’s everything you need to know.

It’s a 2-door Jeep Wrangler Rubicon with a 6-speed manual transmission. The gasoline motor was removed and replaced with an electric motor. Several different battery packs — one of the motor, one over the rear axle, and two in the chassis between the two — provide the drive juice.

The Webasto batteries power an electric motor that is tuned to make the exact horsepower and torque of the V6 gasoline engine. That means it makes 285 horsepower and 260 lb-ft of torque.

Jeep tuned the electric motor this way so that engineers wouldn’t have to change other drivetrain components. All of the axles, the 2-speed transfer case, and off-road capability is unaltered in going to electric.

It does weigh more than a regular Wrangler, tipping the scales at 5,750 pounds. But it’s an off-the-shelf Wrangler converted to electric duty.

Jeep’s Mark Allen talked about how this is a prototype but also a temperature gauge. He plans on taking the Magneto to Moab for the next 3 years, gauging the response of Jeep’s loyalist customers. It won’t, though, stay the same for each of the three years. It’ll be developed and changed as time advances.

What’s cool about this early prototype is that it retains the 6-speed manual transmission. Driving a manual electric vehicle is a little different from driving a gasoline-powered one.

You still have to use the clutch pedal to engage a gear and perform gear changes. But, you do not have to keep the engine revs up to prevent a stall. Once you put the car in 1st gear, for example, you can remove your foot from the accelerator and clutch and the Magneto will sit in 1st gear.

To start rolling, just apply the throttle. There is no need to slip the clutch. An electric motor doesn’t stall like a gasoline-powered motor can.

Using the manual means Jeep doesn’t need a torque converter, which creates a better off-road experience. Sure, a direct-drive one-speed automatic would probably also get the job done, the manual is a cool talking point as Jeep works out the kinks for a production all-electric Wrangler.

Jeep is mum on whether or not there’ll be an all-electric Wrangler, mind you, but with wanting to take this prototype and continue to develop it over the next 3 years, it’s likely a production version is on the way.

If you happen to be in Moab, Utah over Easter, keep your eyes peeled for the Magneto and the rest of the Easter Jeep Safari concepts.