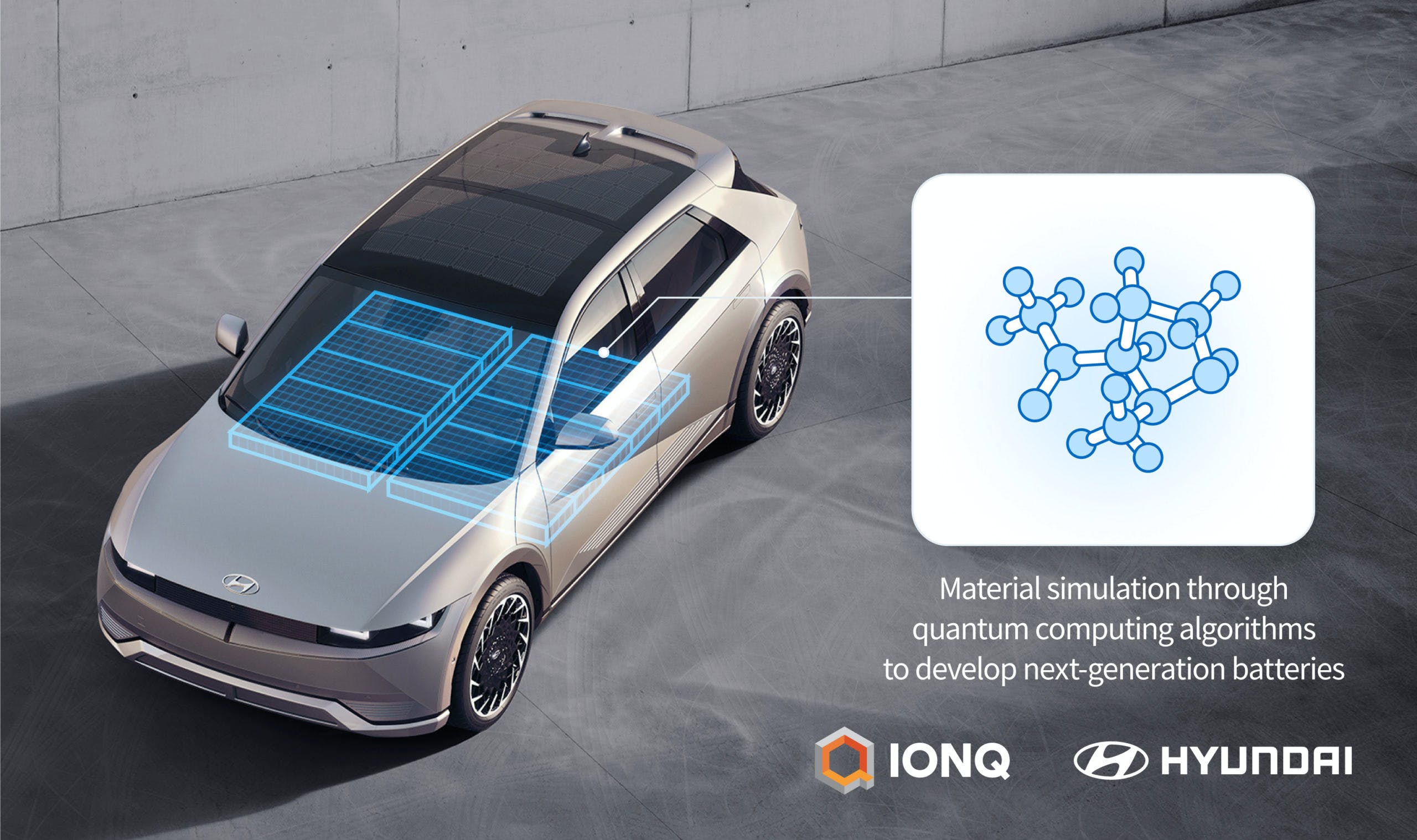 Hyundai Motor Group has announced its latest partnership for next-generation battery development, this time it’s with IonQ a company leading in trapped-ion quantum computing. The partnership aims to develop new variational quantum eigensolver (VQE) algorithms to study lithium compounds and their chemical reactions involved in battery chemistry. This is expected to make significant improvements in future lithium-ion battery packs by improving the charge and discharge cycles, durability, capacity, and safety.

The collaboration will pair Hyundai Motor Group’s lithium-ion battery expertise with IonQ’s specialization in quantum computing. This will allow the companies to create the most advanced battery chemistries on quantum computers, measured by the number of qubits and quantum gates. Hyundai and IonQ’s new development methods aim to lay down the foundations for better quality batteries via more precise simulation and control of their chemical reactions. Hyundai says this could also lead to new types of source material that can save time, cost, and development efforts over time for the most critical and priciest component of a battery-electric vehicle.

“This creative collaboration with IonQ is expected to provide innovation in the development of basic materials in virtual space for various parts of the future mobility,” said TaeWon Lim, Executive Vice President and Head of Materials Research & Engineering Center of Hyundai Motor Group. “We’re excited to step into the upcoming quantum era and take advantage of the opportunities that await with more effective battery power.”

This latest collaboration is key to Hyundai’s Strategy 2025 goals, which include a target of selling 560,000 electric vehicles per year and the introduction of over a dozen EVs. The company also notes that this partnership is a big milestone for combating climate change since EVs play a major role in Hyundai meeting its sustainability targets across the globe.

Peter Chapman, President, and CEO of IonQ said that the company’s main mission is to solve the most complex problems in the world via the continued development of its quantum computers. He also noted that battery efficiency is a field where IonQ’s expertise in quantum computing can make a difference. IonQ’s computers were previously used to simulate water molecules and demonstrate an end-to-end pipeline to imitate large molecules like the ones found in fertilizer creation.

Hyundai Motor Group is among the most aggressive when it comes to electrification. In addition to the Ioniq subbrand, which will consist of three models, it has more EVs coming including a second-generation Kona Electric. Kia alone has at least four more vehicles following the EV6 and the second-generation Niro EV. Genesis, on the other hand, has committed to going all-in with the brand officially transitioning in 2025. It has already revealed three of them: the GV60, Electrified G80, and Electrified GV90. Across all three brands, Hyundai Motor Group will have no less than 22 EVs by 2025.

Most of the vehicles will be on Hyundai Motor Group’s E-GMP platform. This includes the three vehicles revealed last year: the Hyundai Ioniq 5, Kia EV6, and the Genesis GV60. Following those will be the Ioniq 6 sometime in 2022 and the trifecta of large three-row crossovers by 2024, the Hyundai Ioniq 7, Kia EV9, and Genesis GV90. In addition to the second-generation Niro EV, Kona Electric, Electrified G80 and Electrified GV70, there will also be vehicles on convergence platforms. This includes the Electrified G90, the all-electric version of the redesigned flagship sedan, and the Electrified GV80.