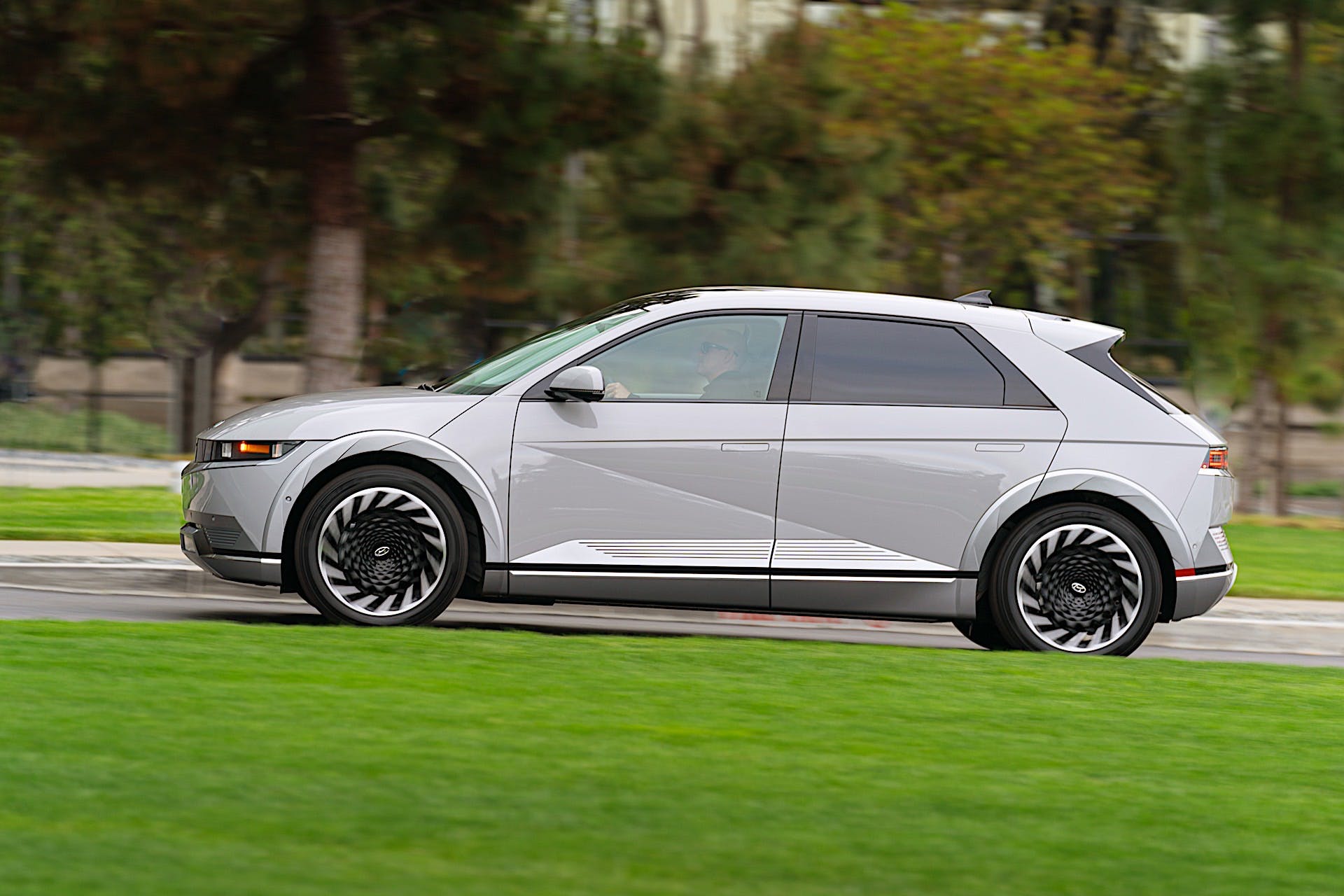 The EPA has finally released the range ratings for the 2022 Hyundai Ioniq 5 and we’re liking what we see. Single-motor models are the most efficient at 303 miles per charge while dual-motor variants are good for 256 miles. Surprisingly, the EPA also posted figures for a standard range model, which has a smaller 58-kWh battery, and that model is rated at 220 miles. Hyundai will only sell the long-range variants of the Ioniq 5, which uses a 77.4-kWh battery pack.

Among mainstream battery-electric vehicles, the 2022 Hyundai Ioniq 5 now has one of the longest driving ranges on a single charge. The single-motor variant, which also has 225 hp and 258 lb-ft of torque, has more range than the Volkswagen ID.4 and barely ekes past the Ford Mustang Mach-E Long Range RWD. However, the California Route 1 Edition of the electric pony has a smidgen more range than the Ioniq 5 at 305 miles per charge. Its sister vehicle, the Kia EV6 can travel 7 miles farther in its single- and dual-motor configurations.

The Tesla Model Y is good for an estimated 326 miles in its long-range dual-motor configuration making it the king of range in its segment. Performance variants have the same 303-mile EPA rating as the single-motor Ioniq 5. At 244 miles, the recently discontinued Standard Range variant travels the shortest distance among Model Y models.

Nissan’s upcoming Ariya is estimated to get similar range estimates to the Ioniq 5 at 300 miles for the single-motor version. The dual-motor version, however, is expected to get a 265-mile EPA rating while offering more power at 389 hp and 442 lb-ft. Dual-motor Ioniq 5 variants are good for 320 hp and 446 lb-ft. The Ioniq 5 is one of the first vehicles on Hyundai Motor Group’s E-GMP architecture developed specifically for battery-electric vehicles. Its battery pack is mounted under the passenger compartment to keep its center of gravity as low as possible. Like the ID.4, Mustang Mach-E, and Model Y, the single-motor variant is RWD.

The Ioniq 5 is also one of a handful of vehicles with 400- and 800-volt charging capability, allowing it to take advantage of 350-kW DC chargers. This will enable it to DC charge from 10 to 80 percent in 18 minutes. The 10.9-kW onboard charger will be able to fully charge the battery using a level 2 AC charger or 240-volt outlet in 6 hours and 43 minutes. One of the Ioniq 5’s unique features is V2L capability thanks to its dedicated EV platform. This means it can power other devices including appliances and homes, enabling you to use the vehicle as a backup power source.

Although it’s the same size as your average compact crossover, the E-GMP platform gives the Ioniq 5 a lengthy 118.1-inch wheelbase, which is 4.0 inches longer than the three-row Palisade. This also yields a lot of usable space inside the cabin and a flat floor. To take advantage of that, Hyundai has given the Ioniq 5 a lot of useful features to make it more practical like a sliding center console and a flat floor. The rear seats slide and recline for additional flexibility. Front seats with ottomans and a full recline feature can be used for a quick snooze while you’re charging.

The 2022 Hyundai Ioniq 5 goes on sale before the end of the year. In addition to the 10 zero-emissions vehicles (ZEV) states, Hyundai will initially sell the Ioniq 5 only in certain regions including Texas, Florida, Illinois, Georgia, North Carolina, Pennsylvania, and Arizona.