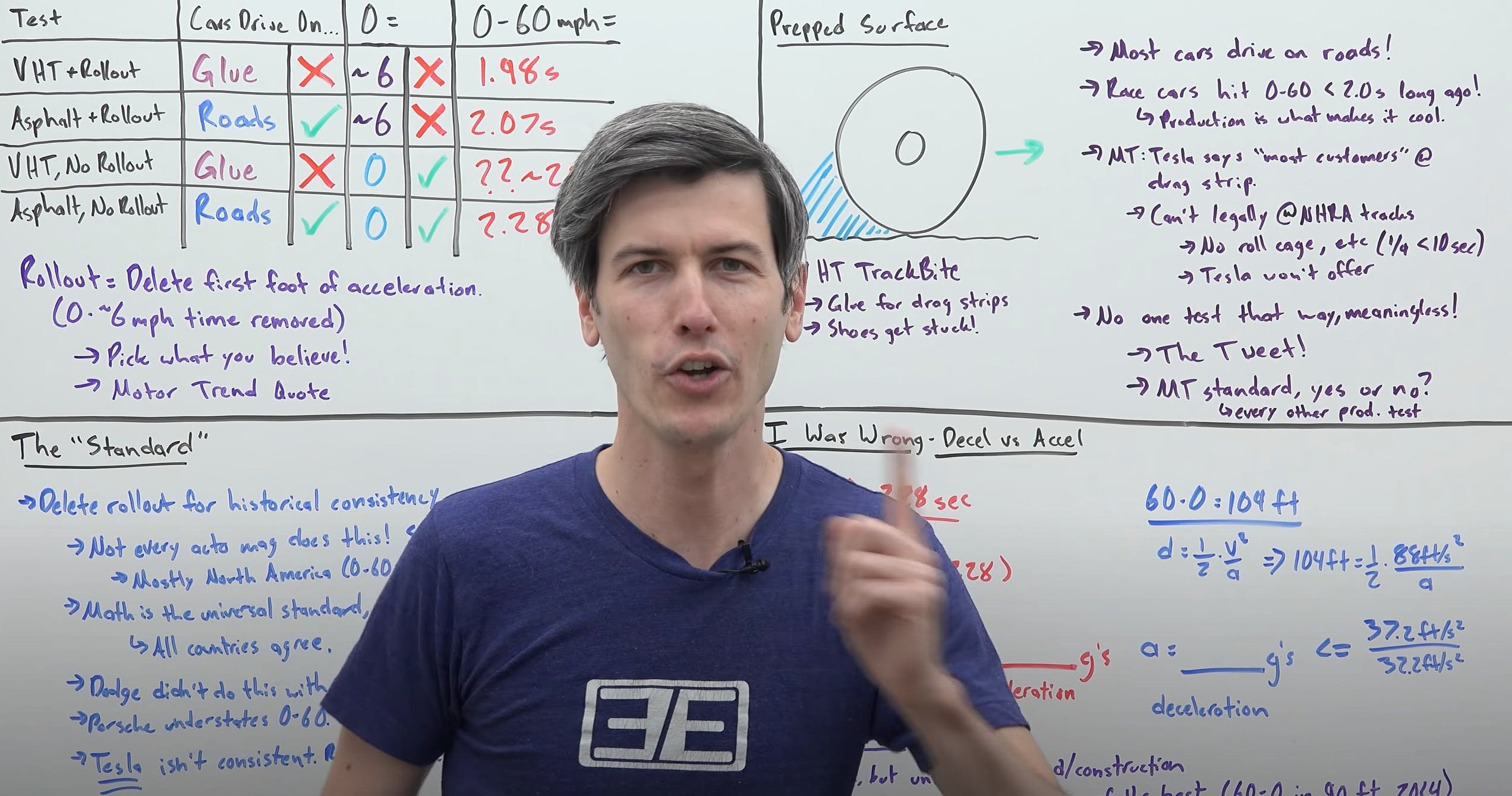 Yesterday, MotorTrend published the results of their test of the acceleration and braking performance of the new Tesla Model S Plaid, which is the quickest accelerating vehicle to 60 mph that they ever tested. Full stop. The sucker is quick.

The magazine also tested the car under a variety of situations, many stipulated by Tesla, so that the lowest number would be achieved. That means testing it on a drag strip with a VHT prepped surface, while deleting 1-foot of rollout.

In that scenario, the car hits 60 mph in 1.98 seconds. Here at EV Pulse, and on any of our associated properties, for 0 to 60 mph timing, we don’t use a prepped surface and we don’t delete rollout.

Why? Because nobody in the real world is going to a drag strip to get 0 to 60 mph time. The timing lights at the track won’t even report an acceleration time. It’s only keeping score of how quickly the car covers distance.

Because time to cover distance is something checked at the drag strip, our performance testing does delete rollout in 1/4-mile timing.

We test both of these ways deliberately because if a consumer reads our numbers, that’s what they’ll most likely achieve in their own test environment. You can read more about our testing methodology here.

Magazines that delete rollout on 0 to 60 mph these days do it because they’ve historically done it. Some automakers that share performance metrics delete rollout while others leave it in.

Jason Fenske from Engineering Explained goes into much more detail about rollout, VHT prepped surfaces, and why 0 to 60 mph should actually start at 0 mph.

Now what’s the big deal between 2.28 seconds and 1.98 seconds? From the seat of your pants not a whole lot. Regardless of how you calculate it, it’s still the quickest accelerating car that the magazine ever tested. Presumably someone will get the folks from Guinness on the horn and arrange an official world record for the car.

But if accurate reporting matters, and facts and figures matter, the only time that should matter when testing a street car is testing a streetcar on normal street surfaces.

We know that even making that statement will make us look like Tesla haters to the general fan community. All because we think deleting rollout isn’t an accurate way to test a car on the street. Because we think that 5 or 6 mph to 60 mph is not “0 to 60 mph.”

We’re not allowed to say in the Tesla Stan community that the car is the quickest in the world unless we tout the line that it can do a 1.98 second run to 60 mph.

But none of that matters. When we test here, our results will be numbers you can easily duplicate. We started testing without calculating rollout so we don’t have a history of cars that numbers that are no longer valid.

Also, be sure to read the entire MotorTrend article before touting the final number. The magazine explains in great detail about how limited the testing is, why they don’t think an owner will be able to take a Plaid to the drag strip, and why the 1.98 second run has a HUGE asterisk next to it.

Written by Chad Kirchner
Follow Author
RELATED ARTICLES
Elon Musk tweets out that Tesla is canceling the Model S Plaid+
Musk says he might be able to allow Teslas without the pedestrian warning speaker to upgrade
Tesla “Full Self Driving” option increases in price to $10,000 (Updated)
Ford’s new F-150 Lightning can also charge other EVs with the onboard generator
RELATED ARTICLES
JOIN THE EV PULSE NEWSLETTER
Receive weekly updates on each of our electrifying articles.