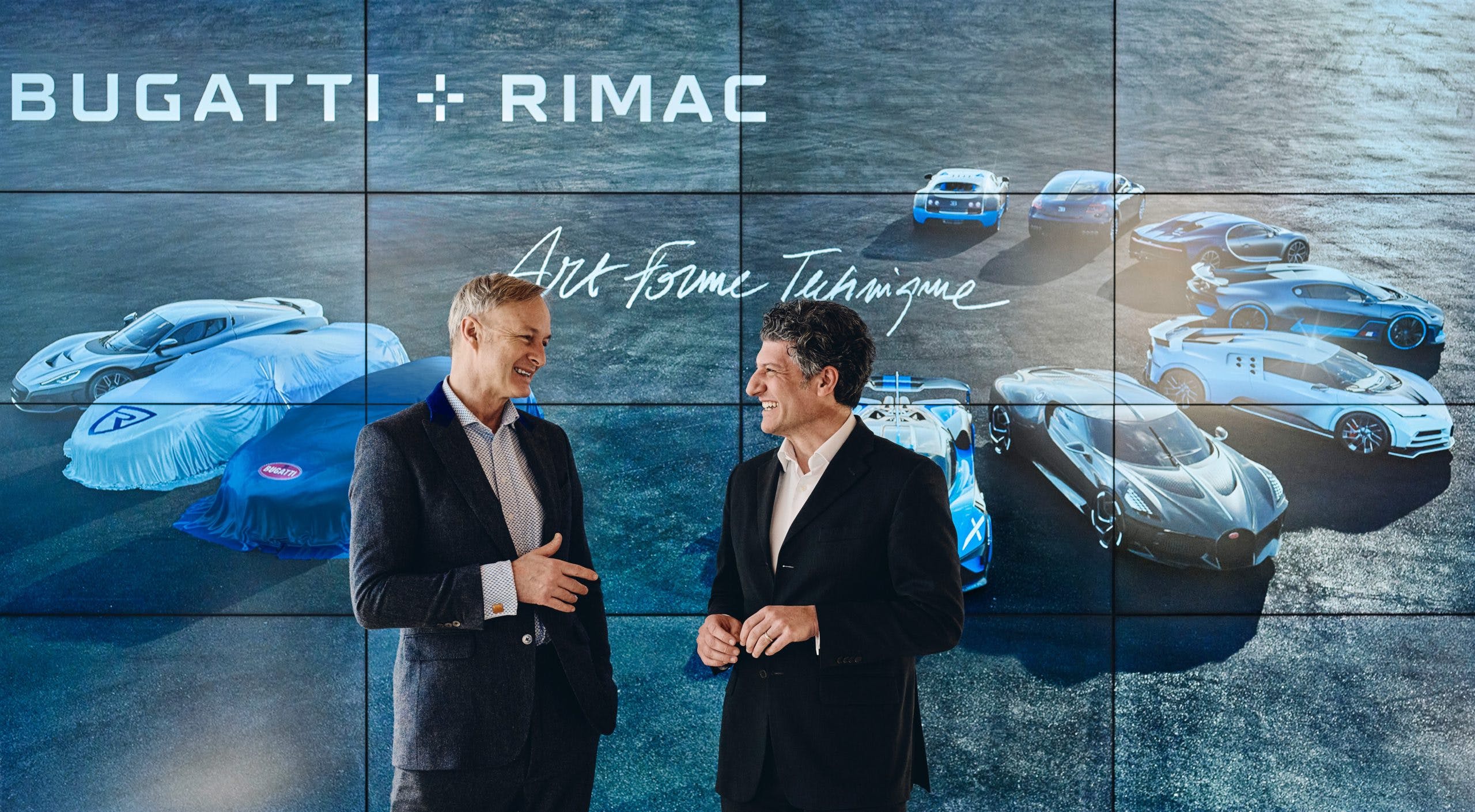 Bugatti Rimac, the new division that resulted in the combination of Bugatti and Rimac Automobili, is wasting no time and getting to work on the future. The new company has just announced that it will open a new facility in Berlin, Germany that will serve as a design and engineering hub for the two brands. It will be run by Achim Anscheidt, Design Director at Bugatti Rimac, and Emilio Scervo, the company’s CTO. Employees at the new site will work hand-in-hand with colleagues at Bugatti Rimac’s headquarters in Zagreb, Croatia.

The new design and engineering center in Germany’s capital will be tasked with the development of future vehicles for Bugatti and Rimac. One of the photos included in the news release is proof that the new company already hit the ground running. Behind the two executives that will be running the Berlin site is a photo displaying every modern Bugatti and Rimac vehicle made to date alongside some concepts. The two vehicles next to the Rimac Nevera are covered in drapes, one donning the Rimac badge and another with the Bugatti crest.

These vehicles are likely the first fruits of the combined team at Bugatti Rimac. The Rimac model’s silhouette is visible despite it being covered and it closely resembles the Nevera next to it. This one also appears to have a wing and could be a derivative or a spinoff model. However, the Bugatti appears to have a profile that looks different from current and past vehicles from the brand, including the Chiron, Veyron, Divo, and special editions like La Voiture Noire and Centodeici. You see Bugatti’s trademark horseshoe grille but the rest of the vehicle appears more conventional than the brand’s current crop of hypercars.

Bugatti’s first electrified hypercar will be among the first vehicles released by the new combined organization. The vehicle covered in the background photo could be that model and will likely be the successor to the Chiron. Mate Rimac, CEO of Bugatti Rimac, revealed last year that Bugatti’s next hypercar will retain the internal combustion engine but be heavily electrified. This suggests that it could use a plug-in hybrid powertrain, meaning that it’ll be some time before Bugatti goes all-in on battery-electric vehicles.

Rimac, on the other hand, will continue its focus on all-electric hypercars like the Nevera. It features a 120-kWh battery pack that adds 37 percent structural stiffness to the car’s carbon-fiber monocoque. Four electric motors power the Nevera, resulting in a total output of 1,914 hp and 1,714 lb-ft of torque. This allows the car to hit 60 mph in 1.85 seconds according to Rimac.

In addition to building cars in France and Croatia, Bugatti Rimac will continue to build powertrains for other automakers under the Rimac Technology brand. It will be 100 percent owned by Rimac Group and will be set up as a supplier. That means Rimac Technology will create battery-electric powertrains and other BEV-specific components. Some of its key customers own a stake in Rimac Group. They include Porsche, which has 24 percent, and Hyundai Motor Group at 12 percent. Bugatti Rimac also transferred control of Bugatti to Porsche, which has a 45 percent share in the joint venture. Rimac Group owns the other 55 percent.

Written by Stefan Ogbac
Follow Author
RELATED ARTICLES
Bugatti Rimac has officially started operations
Bugatti Rimac is the new joint venture co-owned by Porsche
Rimac Nevera is the new name for the C_Two and hits 60 mph in 1.85 seconds
The best safety items you should consider adding with your $600 stimulus money
RELATED ARTICLES
JOIN THE EV PULSE NEWSLETTER
Receive weekly updates on each of our electrifying articles.