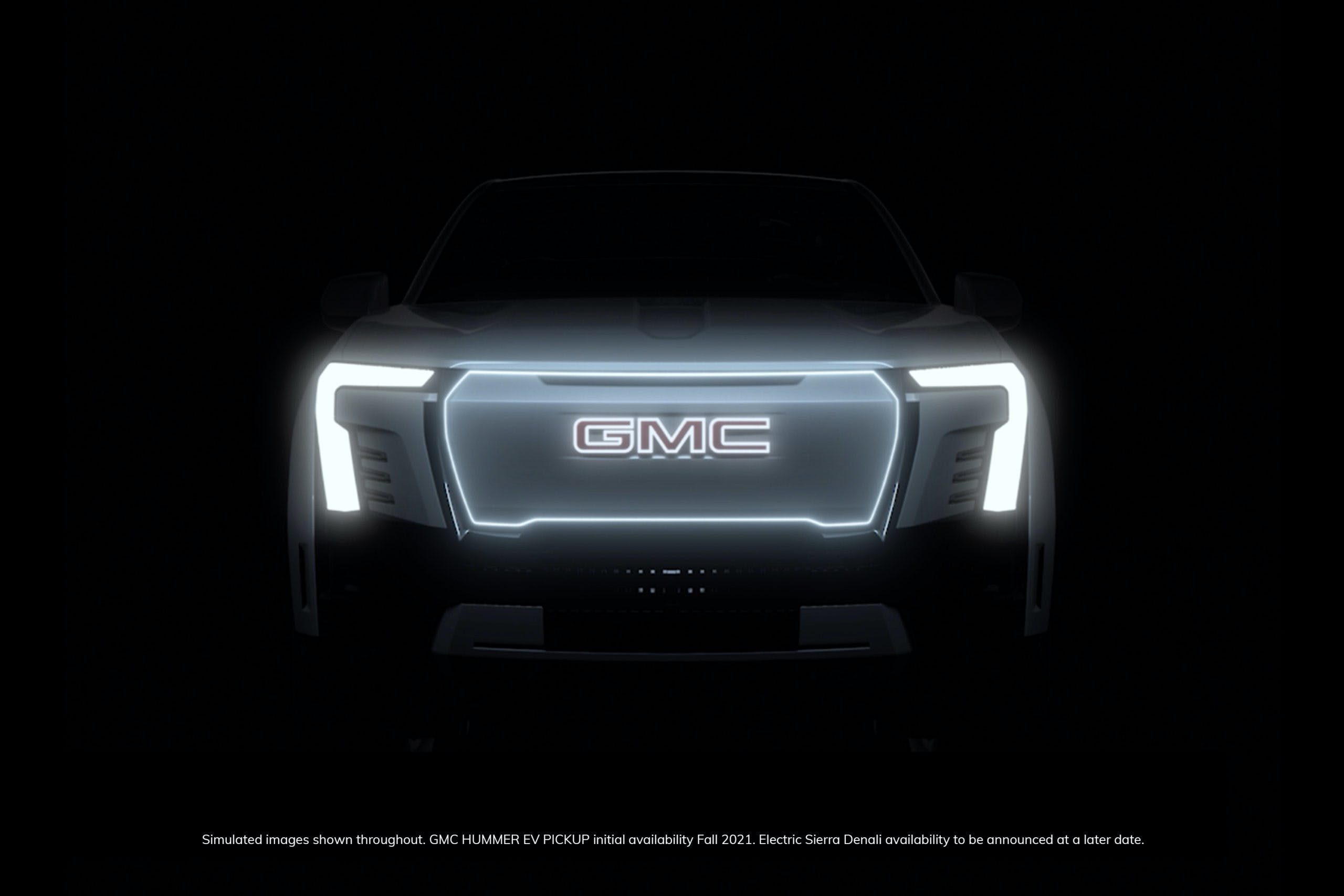 A second electric pickup truck has been confirmed for the GMC lineup and it’s likely more practical than the Hummer EV. The first teaser for the all-electric 2023 GMC Sierra Denali has confirmed the existence of the Chevrolet Silverado E’s cousin. This time, it’s looking more luxurious and imposing.

The 19-second teaser shows the front fascia of the Hummer EV first before moving to a close-up flaunting its sequential headlight startup dance. It then immediately transitions to the electric 2023 GMC Sierra Denali, which also gets a similar light pattern only vertical. We then get a glimpse of part of the front fascia, which features the same C-shaped headlights as the internal combustion truck. What was the daytime running lights on the regular truck is now the main headlight on the electric version and it too sports a cool sequence when it’s turned on.

From the looks of it, the front end of the electric Sierra will also get an illuminated GMC badge and an enclosed grille with LED lights surrounding it. The little sequential lights next to the main cluster appear to be the turn signals. Not much else is shown but the little that we got indicates that the EV won’t be that much different from the current truck but you’ll be able to distinguish it immediately from the other versions. GMC noted that the electric Sierra will be a Denali model. That means it’ll be more luxurious than other variants, offering unique materials, upholstery colors, and trim. This could also be a way for GMC to create further separation between its truck and the Chevrolet Silverado E.

“Sierra Denali holds tremendous equity for GMC and our customers,” said Duncan Aldred, Vice President of GMC. “We now have an opportunity to evolve Sierra’s capabilities and technologies, as afforded by transitioning to an all-electric propulsion while also elevating the luxurious design and comfort associated with Denali.”

Like the Hummer EV pickup and SUV, the electric GMC Sierra Denali will be built on General Motors’ Ultium suite. That means it’ll be on a platform designed specifically for battery-electric vehicles and get the latest batteries and electric motors. GMC didn’t disclose any powertrain details but it’s likely sharing its propulsion system with the Hummer EV and the Chevrolet Silverado E. The electric Sierra Denali could also get four-wheel steering, which has been confirmed on its Chevy cousin. Expect at least a dual-motor setup to come standard on the Sierra but GMC could make it more capable by offering a three-motor setup. Ultium-based vehicles will also get an 800-volt charging architecture, allowing them to take advantage of 350-kW DC chargers.

The electric 2023 GMC Sierra Denali will be the fourth vehicle on the Ultium suite. It follows the Hummer EV family, Cadillac Lyriq, and Chevrolet Silverado E. The truck will be followed by more Ultium-based vehicles including a lineup of Buick SUVs, the flagship Cadillac Celestiq sedan, and a Chevrolet compact crossover that’s expected to cost $30,000. General Motors’ new commercial vehicle startup, BrightDrop, also uses the Ultium suite for its delivery vans, the first of which is the EV 600, a large commercial van that can travel 250 miles per charge. A second van, the compact EV 410 will follow sometime next year.