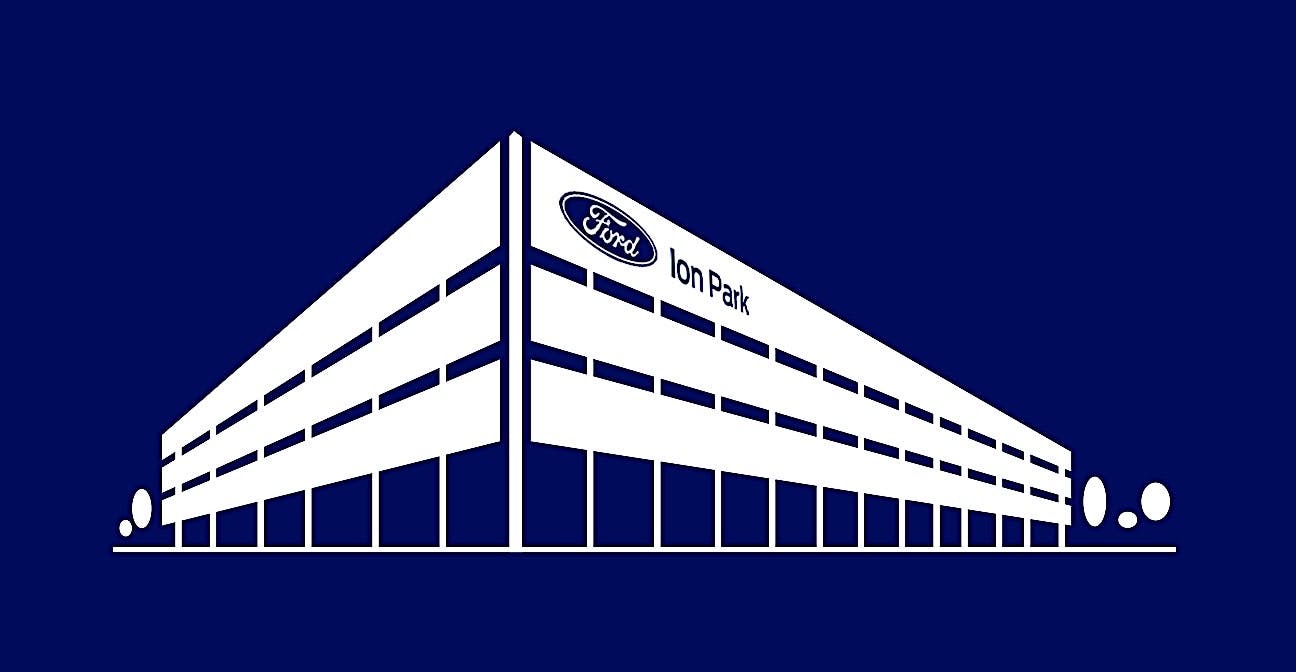 Ford has announced that its new battery-electric vehicle development facility, Ion Park, will be located in Romulus, Michigan. This is part of a $185 million investment in testing, developing, and building battery cells and cell arrays. Of that amount, Ford Ion Park makes up the bulk at $100 million. The goal of this space is to help accelerate the advancement of battery technology in hopes of creating packs that are cheaper and offer more range. Ion Park will also be the home base for researching new technology, testing advanced manufacturing techniques to quickly scale battery designs, and optimize the value chain from mining to recycling.

“Ford already is delivering on our plan to lead the electric revolution with strong new vehicles including Mustang Mach-E, 2022 E-Transit available late 2021 and the 2022 F-150 Lightning available from spring next year,” said Anand Sankaran, director of Ford Ion Park. “The new lab will help Ford speed up the battery development process to deliver even more capable, affordable batteries and is part of Ford’s renewed commitment to making Michigan a centerpiece of its focus on EVs.”

Ford Ion Park will be a collaborative research center and its location was chosen with tech sharing in mind. It is scheduled to open next year and house up to 200 engineers and pilot-scale equipment for electrode, cell, array design, and manufacturing. Ford will refurbish an existing 270,000-square-foot facility, which will become its new center for battery technology development. In addition to research and development, Ion Park is part of Ford’s plan to vertically integrate battery cells and batteries by designing its own. Those working within the facility will be responsible for the whole manufacturing process from mining raw materials to recycling batteries at the end of their life cycle. They’ll be collaborating with Ford’s suppliers and partners, plus the customer service division and battery benchmarking and test laboratory.

Back in 2010, Ford committed to make Michigan the center of all its electric vehicle development. It recently announced that the all-electric F-150 Lightning will be assembled at the Rouge Electric Vehicle Center in Dearborn, Michigan, adding 500 jobs and getting the support of the Good Jobs for Michigan Program. The Van Dyke Transmission Plant has been repositioned and renamed the Van Dyke Electric Powertrain Center, expanding the production line to manufacture electric motors and electric transaxles for hybrid and battery-electric vehicles while retaining 225 jobs.

Ford Ion Park is part of a larger $30 billion investment in electrification by 2025 and its commitment to making Michigan the center of its operations for EV development. “Ford’s investment in battery research and development in Romulus will support hundreds of good-paying jobs, attract innovative talent to Michigan, and help us continue leading the world in advanced mobility and manufacturing,” said Michigan Gov. Gretchen Whitmer. “Ford is an American icon that has left its mark on the world over a century, and with the research that will take place at Ford Ion Park, they will shape the next century while reducing emissions and accelerating electrification.”

During its Capital Markets Day, Ford doubled down on electrification announcing that it will boost its EV offerings by 40 percent in 2030. Part of that plan includes the introduction of two new dedicated EV platforms one for RWD/AWD cars and crossovers and a second one specifically for trucks. Establishing Ion Park is the next big step in Ford’s push toward electrification. It also recently partners with Korea’s SK Innovation for in-house battery development. Beyond the Mustang Mach-E and F-150 Lightning, more EVs are expected to join both the Ford and Lincoln lineup in 2024 and 2025.