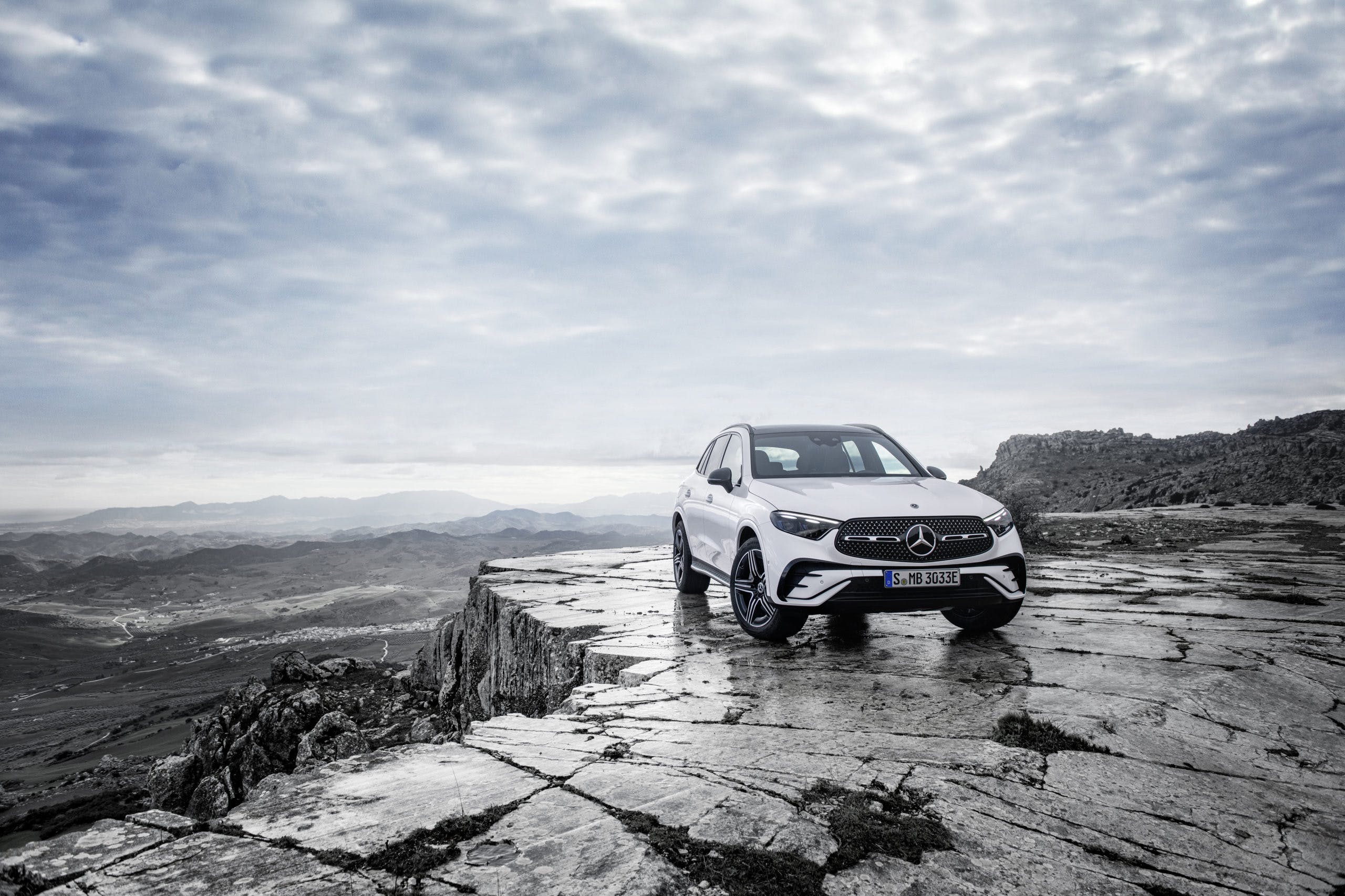 The second-generation 2023 Mercedes-Benz GLC-Class has officially made its world debut and it’s got a whole range of electrified powertrains on offer.

In terms of design, Mercedes’ latest compact luxury SUV has an evolutionary look that shows off its family lineage to the new C-Class and S-Class. This time around, it leans heavily into the car side of the spectrum, resulting in a wagon-like appearance. Soft curves, thin head- and taillight clusters, and a grille with softer corners give the new GLC a more elegant yet muscular look. For the first time, the GLC-Class is available in AMG Line configuration. This adds body-colored fender flares, a unique grille pattern, and your choice of alloy wheels ranging from 18 to 20 inches in diameter.

The 2023 GLC-Class is 2.4 inches lower and 0.16 inches lower, resulting in a roomier interior, especially when combined with the wider front and rear tracks. Its shape also contributes to its low drag coefficient of 0.29 and a quieter cabin. In addition to standard laminated front doors, there’s an optional thermally insulated glass to cut down exterior noise even more. Extensive use of acoustic foam on the upper body shell, ultra-high-strength and hot-formed steel, and other types of sound-reducing material throughout the car have been optimized to keep the cabin quiet.

You’ll find an interior layout reminiscent of the C-Class and S-Class. You can opt for an optional dual-screen layout with a 12.3-inch digital gauge cluster and an 11.9-inch portrait-style main display with a fingerprint scanner. Within the latter is the second-generation MBUX interface, which includes a virtual assistant you can toggle by saying “Hey Mercedes” and over-the-air (OTA) update capability. There’s a new Newsflash feature that gives you the latest news of the day via voice command. Available features include a 15-speaker Burmester 3D surround sound system, a head-up display, and a panoramic sunroof.

Mercedes offers a full suite of driver assistance features on the 2023 GLC-Class but some require optional packages. It has also updated certain functions; adaptive cruise control, for example, now works on highways, towns, and country roads and can detect stationary vehicles even when you’re traveling at 60 mph. Lane centering now stays active at up to 130 mph and traffic sign recognition can now read conditional signs. The available surround-view camera now shows a transparent hood area on the screen to show what’s under your vehicle.

Powertrain choices include a 2.0-liter turbo-four paired to a nine-speed automatic transmission and Mercedes’ 48-volt EQ Boost mild hybrid system in the GLC 300. It makes 258 hp and 295 lb-ft of torque and can get extra help from an integrated starter generator, which adds 23 hp and 148 lb-ft. In addition to RWD, Mercedes’ 4matic AWD system is also available.

At least in other global markets, there will be three plug-in hybrid variants. The GLC 300e couples the 2.0-liter turbo-four and nine-speed automatic with a 31.2-kWh battery pack and 100-kW electric motor for a combined system output of 313 hp and 406 lb-ft. If you need more power, the GLC 400e ups the ante by using a more powerful gas engine. This bumps the combined output to 381 hp and 479 lb-ft. There’s also a diesel plug-in hybrid that swaps in a turbodiesel 2.0-liter four-cylinder for a total rating of 335 hp and a whopping 553 lb-ft. Thanks to the large battery, Mercedes says the plug-in hybrid GLC models can travel 100 km or 62 miles in all-electric mode but that’s on the more forgiving WLTP test cycle.

The GLC-Class plug-in hybrid is also among a short list of PHEVs that can DC charge. This one has a peak rate of 60 kW and can get you a full charge in 30 minutes. Depending on the market it also gets an 11-kW onboard charger for quicker AC charging at home or a public station. In addition to the usual drive modes, the plug-in GLC models have a Battery Hold function so you save your battery charge for city driving.

As of now, the only version of the 2023 Mercedes-Benz GLC-Class that has been confirmed for the U.S. is the GLC 300 with the 48-volt EQ Boost system. Mercedes offered a plug-in hybrid variant of the previous generation model for a brief period called the GLC 350e. We hope the GLC 400e finds its way to the U.S. to slot between the standard GLC 300 and the AMG GLC 53. This could be a great competitor to the Audi Q5 55 TFSI e, Lexus NX 450h+, and the Volvo XC60 T8 Recharge Extended Range.