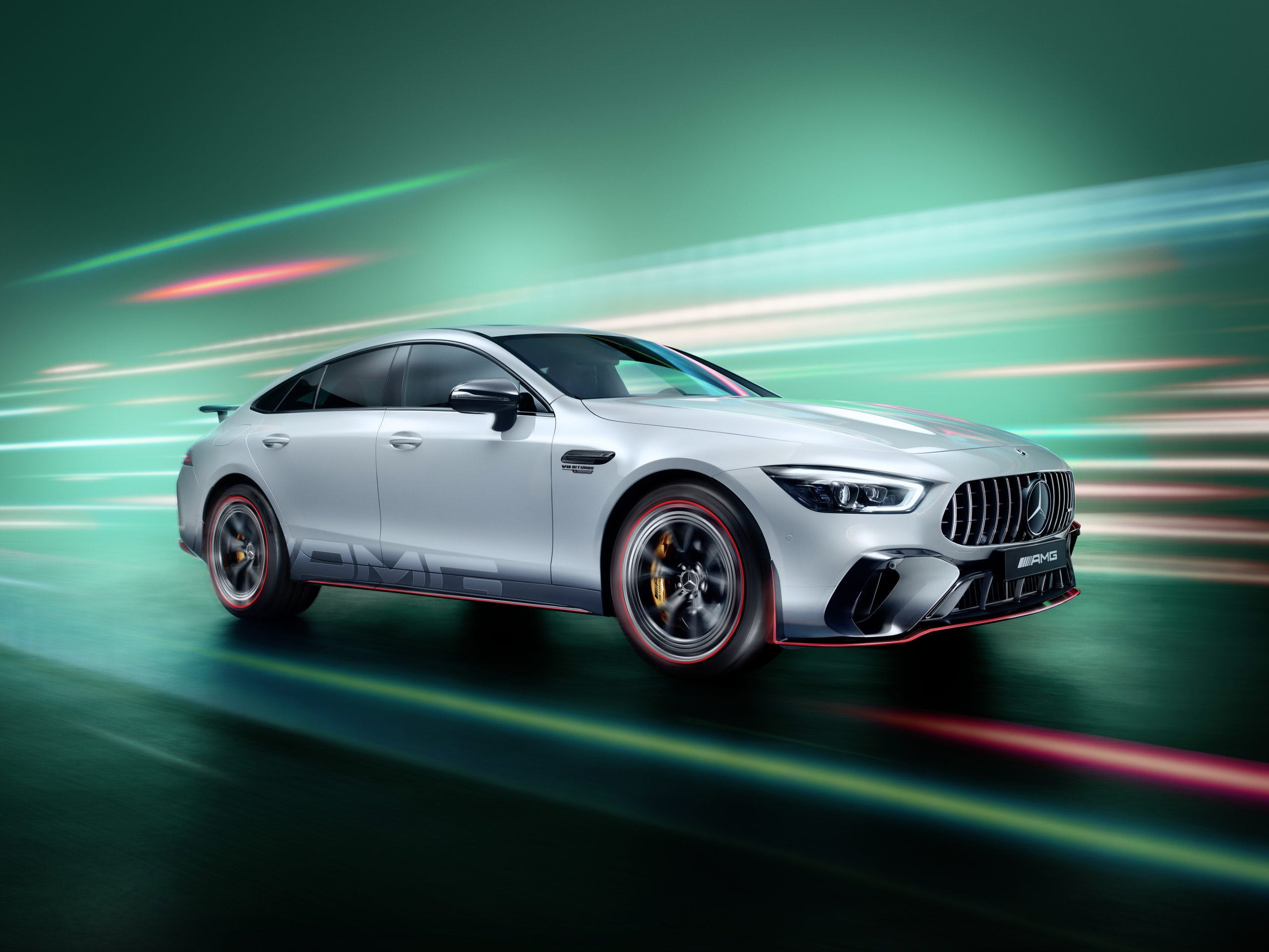 The 2022 Mercedes-AMG GT 63 S E Performance has yet to go on sale across all global markets but it’s already getting a special edition model. Dubbed the F1 Edition, this pays homage to Mercedes-Benz’s Formula 1 hybrid technology with lots of cosmetic tweaks. Its biggest distinguishing feature is the Manufaktur Alpine Grey nonmetallic exterior color, which is complemented by a massive foiled AMG logo on the lower parts of the doors finished in gray and black with red accents. The car also gets 21-inch alloy wheels in matte black with red accents following the same color scheme as Mercedes’ Formula 1 medical car.

Power comes from a plug-in hybrid system that couples a hand-built 4.0-liter twin-turbo V8 to an electric motor, a 6.1-kWh lithium-ion battery, and a nine-speed automatic transmission. The total system output is 831 hp and 1,084 lb-ft of torque going through an AMG-tunedAWD system. This enables the AMG GT 63 S E Performance to sprint to 60 mph in 2.9 seconds. The electric motor is mounted on the rear axles and is coupled to a two-speed gearbox and an electronically-controlled limited-slip differential. In all-electric mode, Mercedes says the AMG GT 63 S E Performance can travel up to 7 miles, hinting at its performance mission.

The AMG GT 63 S E Performance is one of several electrified performance vehicles coming from Mercedes-AMG. Many of them, however, are battery-electric vehicles with the first two being the AMG EQS and AMG EQE sedans. Following them will be the AMG variants of the EQS SUV and EQE SUV, which should offer similar output to their sedan counterparts. All four vehicles are underpinned by On the plug-in hybrid front, Mercedes-AMG will use the same V8-based powertrain on the new SL roadster.

The 2023 Mercedes-AMG GT 63 S E Performance will be one of only a handful of plug-in hybrids from the company alongside the SL drop top. Mercedes is also developing three new platforms specifically for battery-electric vehicles. AMG models will be using the AMG.EA architecture, which will be specifically for performance models. These will be replacing the underpinnings found in existing Mercedes-Benz vehicles. In addition to the EVA2 platform, smaller BEVs like the EQA and EQB use a convergence architecture shared with purely internal combustion versions of the GLA-, GLB-, and CLA-class. Expect the most potent AMG GT 4-door Coupe model to arrive sometime late this year or in early 2023 as a 2023 model vehicle.