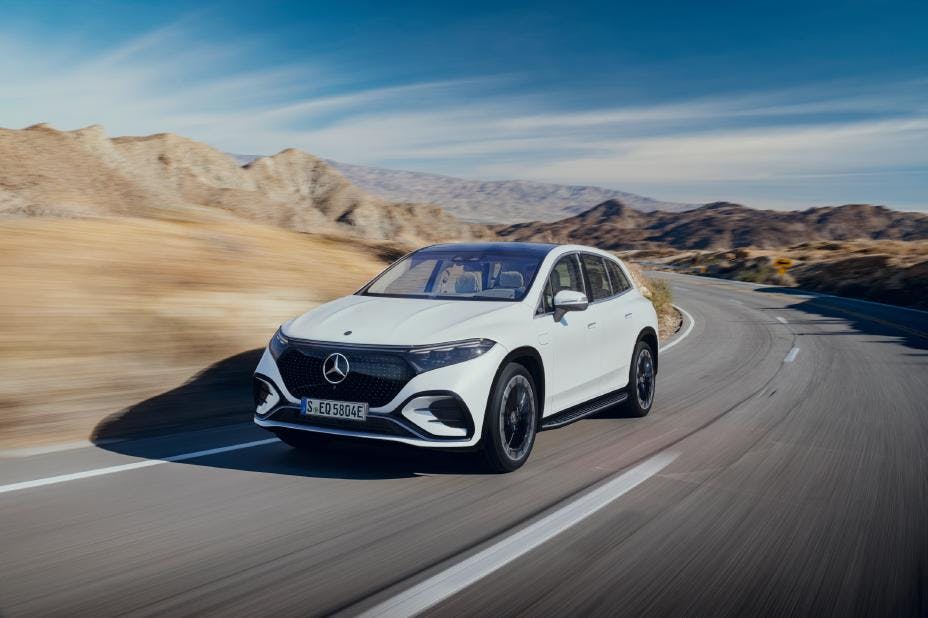 After numerous teasers, the 2023 Mercedes-Benz EQS SUV has made its global debut. The all-electric three-row crossover is the third vehicle underpinned by the EVA2 architecture following the EQS and EQE sedans. On a single charge, the EQS SUV can travel up to 600 km or 373 miles on the WLTP cycle but expect a lower number on the more conservative EPA cycle.

Sharing the same 126.4-inch wheelbase as the sedan, the 2023 Mercedes-Benz EQS SUV is 7.8 inches taller, giving passengers in all rows more space. There are also a lot of additional features that add flexibility including a reclining second-row that adjusts 5 inches forward and backward. As a result, you can get between 22.7 to 31 cubic feet of cargo space behind the second row. The maximum capacity with all seats down is 74.2 cubic feet in the five-seat version. Opting for the three-row variant eats into cargo capacity a little bit. With all seats up, you only have 6.8 cubic feet. Dropping the third row expands that 28.2 cubic feet while folding the second and third rows gets you 71.3 cubic feet. The second row also folds 40/20/40 for added flexibility.

Like its sedan sibling, the EQS SUV’s shape has been optimized for aerodynamics. Despite being upright, it’s still rounded and quite low to the ground. Thankfully, adaptive air suspension with adjustable dampers, rear-wheel steering, and an Off-Road drive mode is standard for those who want to go slightly off the beaten path. In front, you’ll find the corporate Mercedes-EQ face complete with an enclosed grille connected with the headlights. Full-width LED taillights with the same pattern as the sedan is in the rear. Wheel sizes range from 20 to 21 inches in diameter and have been optimized for aerodynamic performance to complement the crossover’s slippery exterior.

You’ll be able to get the EQS SUV in the same configurations as the sedan minus the AMG version, which will likely be a late addition. The single-motor EQS 450+ makes 355 horsepower and 419 lb-ft of torque while the dual-motor EQS 580 produces a healthy 533 hp and 633 lb-ft. Both use the same 107.8-kWh lithium-ion battery as the EQS sedan. It has a thermal management system that allows you to bring it to optimal operating temperature before you charge the vehicle. Using a DC charger, the EQS SUV has a 200-kW peak rate allowing it to go from 10 to 80% in 31 minutes. The 9.6 kW onboard charger enables it to get to 100% in 11.25 hours using a level 2 AC charger. It also supports plug and charge capability via the Mercedes me Charge app.

Mercedes’ MBUX interface is standard on all EQS SUVs. The base layout features a 12.8-inch main touch screen and a 12.3-inch digital cluster. You can upgrade to the MBUX Hyperscreen, which houses two 12.3-inch displays, one for the driver and front passenger, and a main 17.7-inch touch screen under a single piece of curved glass totaling 56 inches.

Those seated in the second and third rows will be treated to the MBUX High-End Rear Seat Entertainment System Plus with two 11.6-inch displays, which can be complemented by an optional tablet. You also get an upgraded 15-speaker Burmester audio system with standard Dolby Atmos immersive sound capability for a superior listening experience.

Every EQS SUV gets the full suite of driver assistance features as standard equipment. In addition to the usual suspects like adaptive cruise control, front and rear automatic emergency braking, and lane centering. The crossover also gets evasive steering assist and an exit warning function that keeps you from opening the doors if someone or something is passing by. There’s also a new digital light feature that projects road signs and warning onto the road. The augmented reality head-up display will also show you relevant driving information in 3D.

Like its sedan sibling, the EQS SUV goes beyond making the interior extremely quiet. You also get ASMR sounds via the Energizing Nature program with four different selections and a Power Nap feature that conditions the cabin for resting while you’re charging. Every component from the powertrain to the vehicle acoustics has been optimized for minimal vibrations and lower noise levels. A new fragrance called No. 6 Mood mimosa for the Air Balance package also debuts with the EQS SUV and Mercedes describes it as “an earthy fragrance with an alluring scent.”

The 2023 Mercedes-Benz EQS SUV will be the first battery-electric vehicle in Tuscaloosa, Alabama. This facility currently builds the GLE-Class, GLE Coupe, and the GLS-Class. It will also build batteries in-house using a fully digitized production process, which will see 600 new jobs added to the region. Following the EQS SUV, Tuscaloosa will also produce the upcoming EQE SUV.