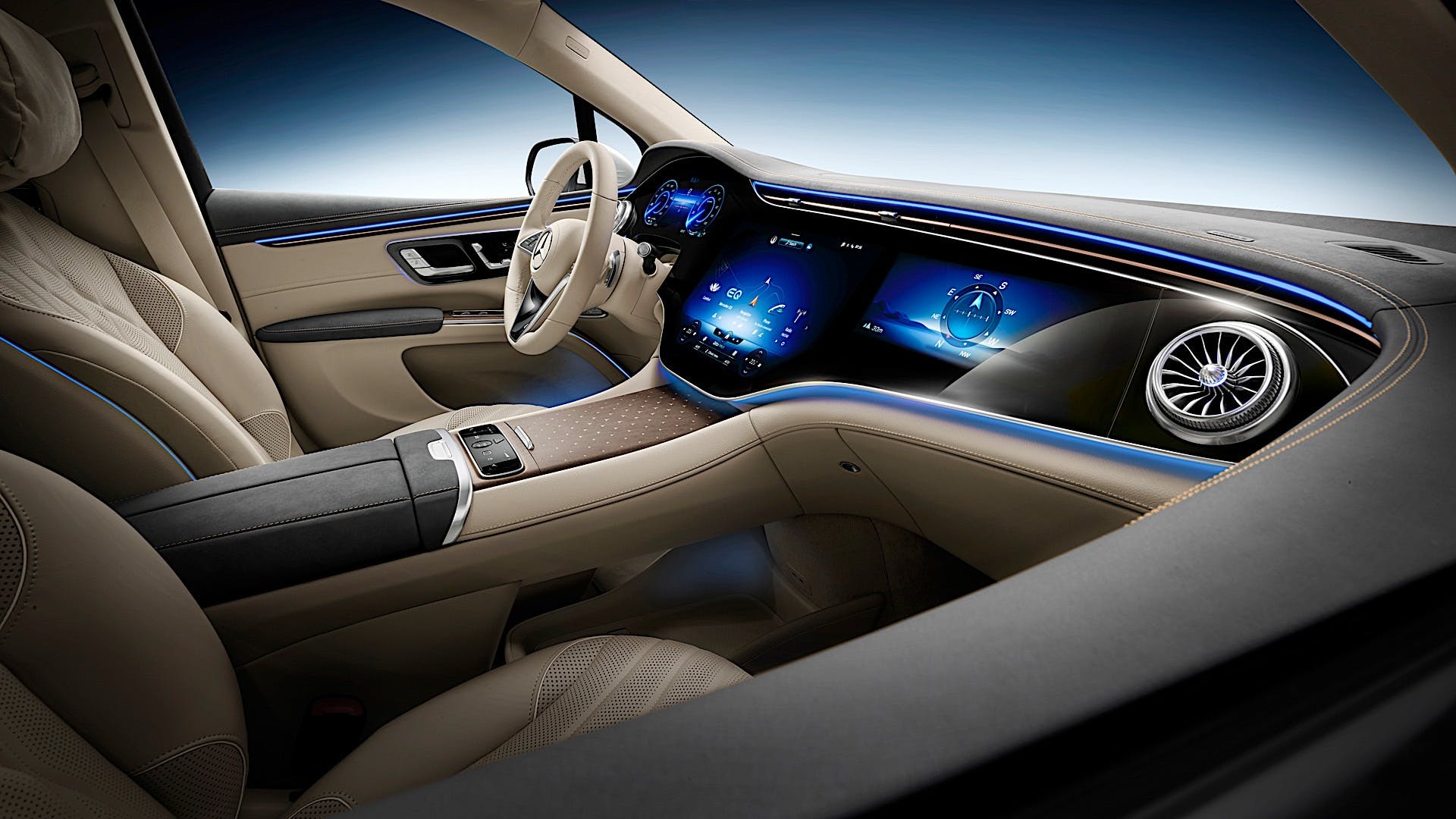 The 2023 Mercedes-Benz EQS SUV has been previewed via a generous helping of interior shots ahead of its April 19 world debut. To no one’s surprise, it’s nearly identical to the EQS sedan complete with crazy ambient lighting elements everywhere. Like the EQS and EQE sedans, the centerpiece is the MBUX Hyperscreen, a single piece of glass housing two 12.3-inch displays, one for the driver and another for the passenger, and a 17.7-inch main touch screen. In total, you get 56 inches worth of display real estate. In certain regions, the passenger display can play media like video streaming service or TV when the vehicle is in motion. However, it will darken or dim down if the car detects the driver looking at the display. There’s also a rear-seat entertainment system to keep those in the back entertained.

To create a lounge-like ambience, the 2023 Mercedes-Benz EQS SUV will use a broad range of materials and offer seven color combinations aimed at enhancing the cabin’s spacious feel. One of these examples is the interior trim that blends Magnolia Wood and stainless steel. Holes shaped like the Mercedes three-pointed star are cut into the wood and are then pressed with steel sheets to create the desired effect, which makes the wood glimmer. Since this is the crossover sibling, the EQS SUV offers lots of additional space and up to three rows of seating. The third row is limited to two individual seats and is raised slightly to provide additional comfort.

The EQS SUV is the first Mercedes-Benz vehicle to get the Dolby Atmos sound system. This unit features more customization, allowing you to better tailor the listening experience to your liking or based on the genre of music you listen to. Mercedes’ Energizing Air Control Plus cleans the cabin air by removing fine particles, pollen, and other contaminants via a HEPA filter with active carbon to maximize filtration. There’s also a new earthy scent called No. 6 Mood mimosa to go with the new all-electric crossover.

When it debuts later this year, the EQS SUV will be the third vehicle on the EVA architecture following the EQS and EQE sedans. This will be the flagship battery-electric crossover in the Mercedes-Benz lineup and will have both AMG and Maybach versions, the latter of which was previewed last year by a concept shown at the 2021 Munich auto show. Expect the more pedestrian versions to come with a dual-motor configuration as standard.

The EQS SUV will be the first U.S.-built battery-electric vehicle from Mercedes-Benz. It will be manufactured at the Tuscaloosa, Alabama facility, which currently makes the GLE-Class and GLS-Class among others. The smaller EQE SUV will also be built at Tuscaloosa, which is currently preparing to expand with the addition of a new battery plant as part of a global push toward full electrification by 2030.

In total, five of the nine members of the Mercedes-EQ family will come to the U.S. market. First was the EQS sedan and it will be followed by the EQE sedan and the seven-passenger EQB compact crossover. The 2023 Mercedes-Benz EQS SUV will be the fourth addition before the lineup gets rounded out by the EQE SUV at the end of the year. Other markets also get two vans, the EQT and EQV, and two other crossovers, the EQC and EQA.