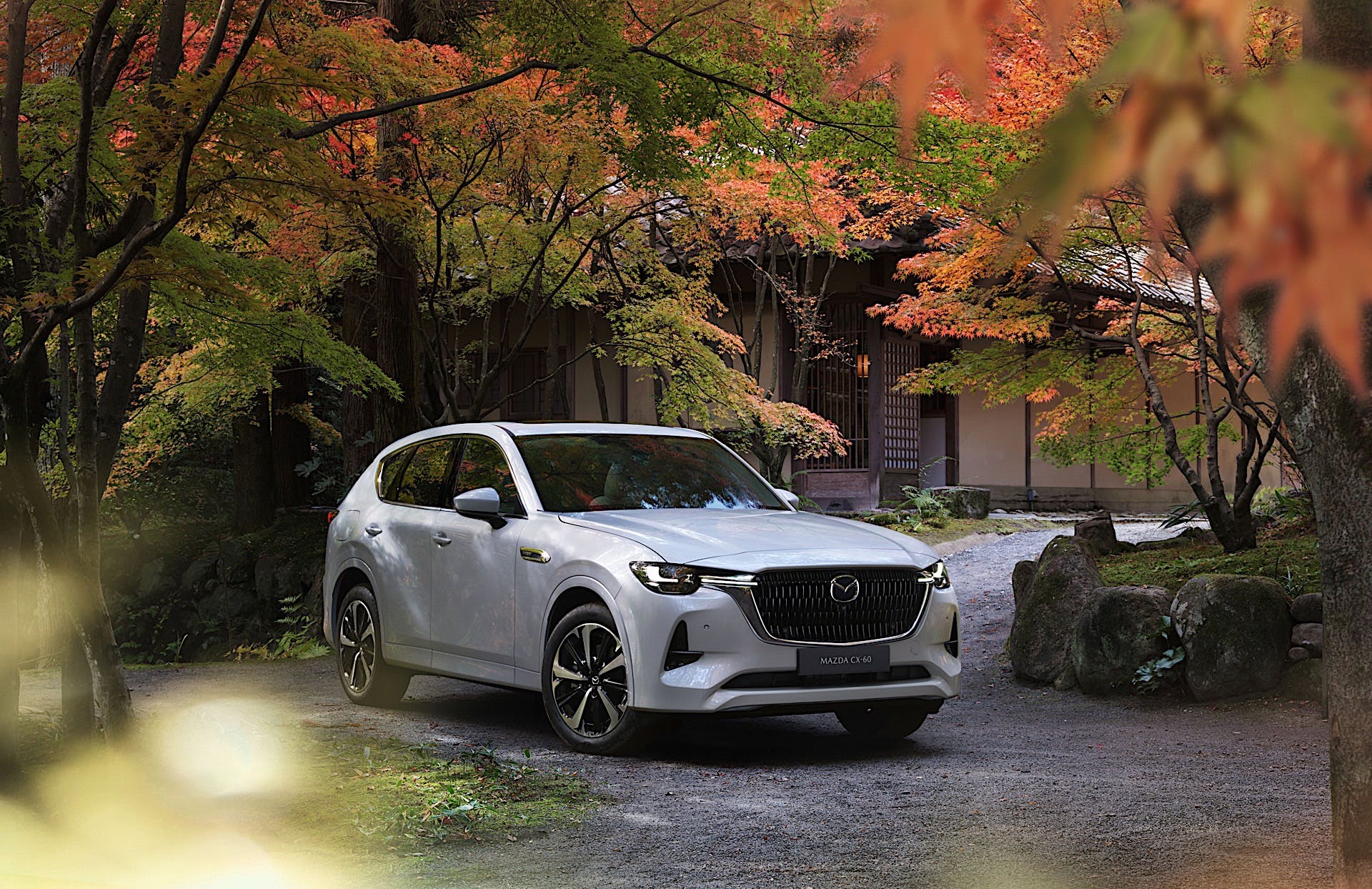 Mazda has finally taken the wraps off its first vehicle on the new rear-drive-based architecture, the CX-60. Arriving in Europe later this year, the CX-60 is the first of four crossovers on the new large vehicle platform called the Skyactiv Scalable Architecture. It also previews the plug-in hybrid powertrain that’s coming to the CX-70 and CX-90 for the North American market. The Mazda CX-60 PHEV will also be joined by variants powered by six-cylinder engines with a 48-volt M Hybrid system.

Based on its looks, the Mazda CX-60 PHEV looks like a refined CX-5. It features the same grille with headlight clusters connected to it. Even the side window line and silhouette are nearly identical. The shape of the headlights and taillights have been changed, giving the crossover a more distinct look but still recognizable as a Mazda. In addition to wider openings in the lower front fascia, the CX-60 PHEV also gets faux quad exhaust tips. The crossover also offers a full suite of driver assistance and collision prevention system, which includes adaptive cruise control, traffic sign recognition, and hill descent control.

Inside, you’ll find a design that continues the evolutionary theme and builds on the minimalist look that first appeared on the second-generation CX-5. There’s a large main touch screen on the dash, maple wood trim, and woven fabric inspired by the Japanese stitching technique called Kakenui or “hanging stitching.” You’ll also be able to choose a two-tone white and black scheme for the interior. The CX-60 is also the first Mazda to get a fully digital gauge cluster.

Mazda’s first in-house-developed plug-in hybrid system is a parallel setup. It couples a 2.5-liter four-cylinder with a 100-kW (134 hp) electric motor, a 17.8-kWh battery, and a new eight-speed automatic transmission. The combined output is 322 hp and 368 lb-ft of torque, enabling the CX-60 PHEV to hit 100 km/h (62 mph) in 5.8 seconds. Mazda says the crossover can travel up to 42 miles in all-electric mode but that’s likely optimistic since it’s on the WLTP cycle. AWD and a drive mode selector are standard, the latter of which offers Normal, Sport, Off-Road, Towing, and EV settings. The same plug-in hybrid powertrain has also been confirmed for the CX-80, the smaller of the two upcoming Mazda three-row SUVs and the one that will be sold outside of North America.

Although the CX-60 PHEV isn’t coming to the North American market, it confirms at least one powertrain option coming for the CX-70, which will slot between the CX-50 and CX-90. The new 2.5-liter four-cylinder-based plug-in hybrid gives Mazda a powertrain that’s competitive to what Toyota and Hyundai offer. This also means the CX-70 will have more power than any other plug-in hybrid crossover in the mainstream segment. The only vehicle we don’t know the output of is the Mitsubishi Outlander PHEV, which has an upgraded system with more powerful electric motors and a 20-kWh battery pack.

The new four-cylinder-based plug-in hybrid system on the Mazda CX-60 PHEV is the first of four new electrified powertrains. Larger vehicles like the upcoming three-row CX-90 will get one that utilizes a new Skyactiv-G 3.0-liter inline-six. A Toyota-source regular hybrid system will be used on the CX-50. Finally, the MX-30 PHEV takes the battery-electric variant and adds a rotary engine that works as a generator, effectively turning it into a plug-in hybrid.