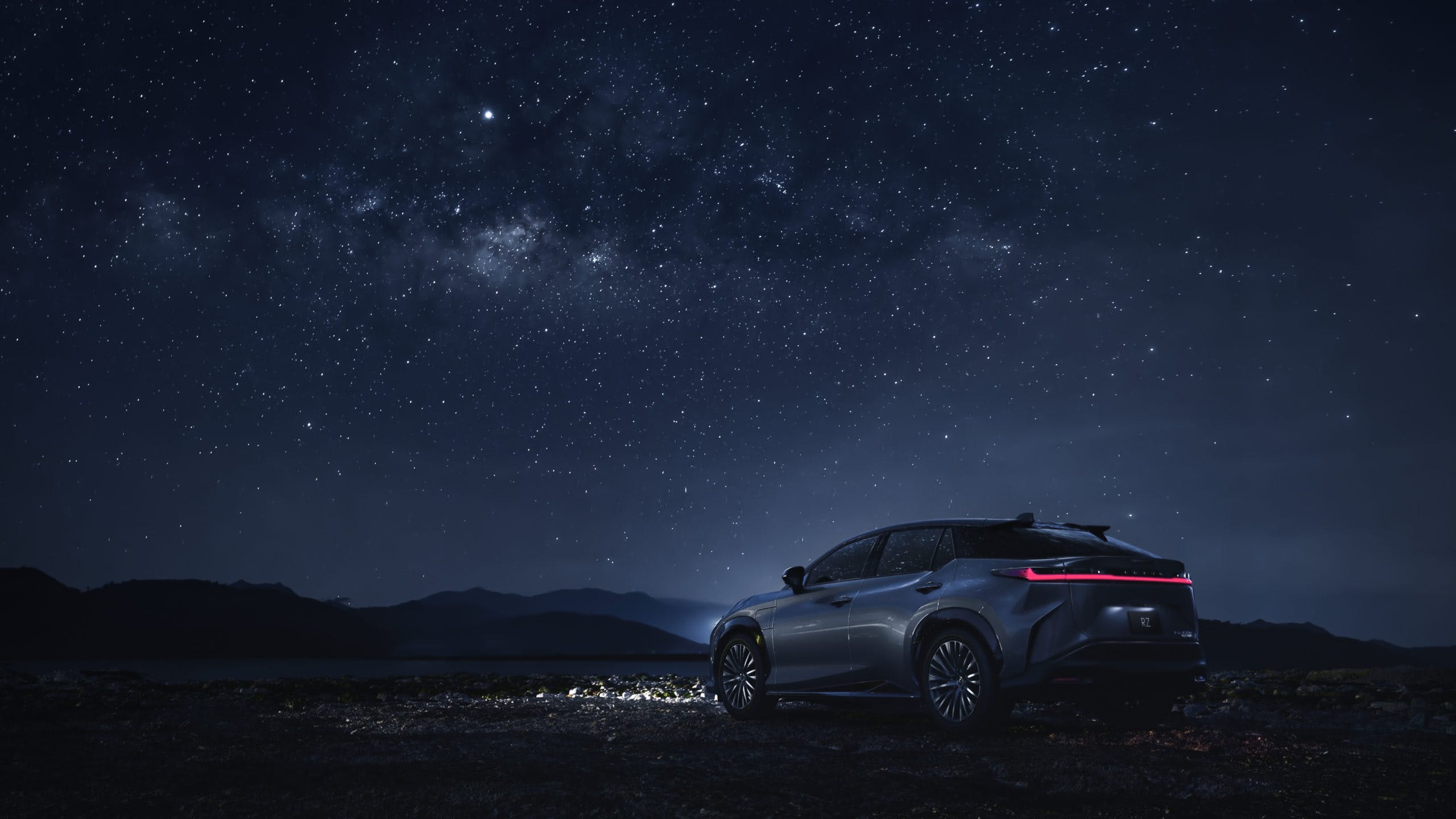 We’re only two days away from the world debut of the 2023 Lexus RZ 450e and we get another glimpse of the car via a new preview photo. This shot shows the first Lexus battery-electric vehicle for North America under the night sky with its full-width LED taillights on. You can also see the twin roof spoilers peeking out, giving the crossover a similar silhouette to the Toyota bZ4X.

The 2023 Lexus RZ 450e has already been previewed completely undisguised multiple times in photos after Toyota previewed its BEV lineup in December. Most of the design cues from the LF-Z Electrified Concept have remained intact like the low-slung roofline, the grille-free front end with the spindle outline, and the black accents in the lower front fascia. It also appears lower to the ground than the mechanically similar Toyota bZ4X and Subaru Solterra, likely hinting at the RZ’s on-road focus.

In addition to the new teaser shot, Lexus also posted a short video on its Japanese YouTube channel showing off the crossover’s development process. We also see a new exterior color for the RZ that has to be one of the wildest-looking schemes out there. The main hue appears to be Cadmium Orange and it is matched with black as a contrast. However, it’s not your average two-tone layout because it forms a triangle pattern on the hood connecting with the enclosed grille, making it look like the front end has a giant black Lexus spindle pattern. Black side mirrors and a black roof round out the crazy look.

Built on Toyota’s new e-TNGA platform, the RZ will be the first Lexus BEV in North America. Elsewhere in the world, the company already sells the UX 300e but that vehicle isn’t built on a dedicated all-electric architecture. The RZ will also be the first model to get the Direct4 torque control system for electrified vehicles. This system allows for precise power distribution across all four wheels and enables torque vectoring by braking. Expect the RZ to have quicker charging speeds and more power than its Toyota and Subaru counterparts. When you consider the 450e moniker, it’s obvious that this vehicle will be the one to get if its mainstream brethren are too pedestrian for you. Vehicles that wore the 450 badge were mainly hybrids and all of them had over 300 hp combined, further hinting that the RZ is going to be more potent.

The RZ 450e is the first of five upcoming BEVs from the Lexus brand, which also includes a three-row crossover and a sedan, the latter of which will likely serve as the replacement for the IS. A supercar appears to be in the works as well because Lexus previewed a coupe powered by solid-state batteries to succeed the LFA. Two wagons and a convertible were also teased along with six additional models but not all of those are coming to North America.

By 2030, Lexus will become an all-electric brand and it intends to have BEVs account for 100 percent of its sales in Europe, North America, and China. That should be around 1 million units across the global markets it does business in. The brand intends to sell only BEVs worldwide by 2035. The 2023 Lexus RZ 450e is the first step into full electrification and is part of a $70 billion investment by Toyota to launch the EV lineup for both brands.