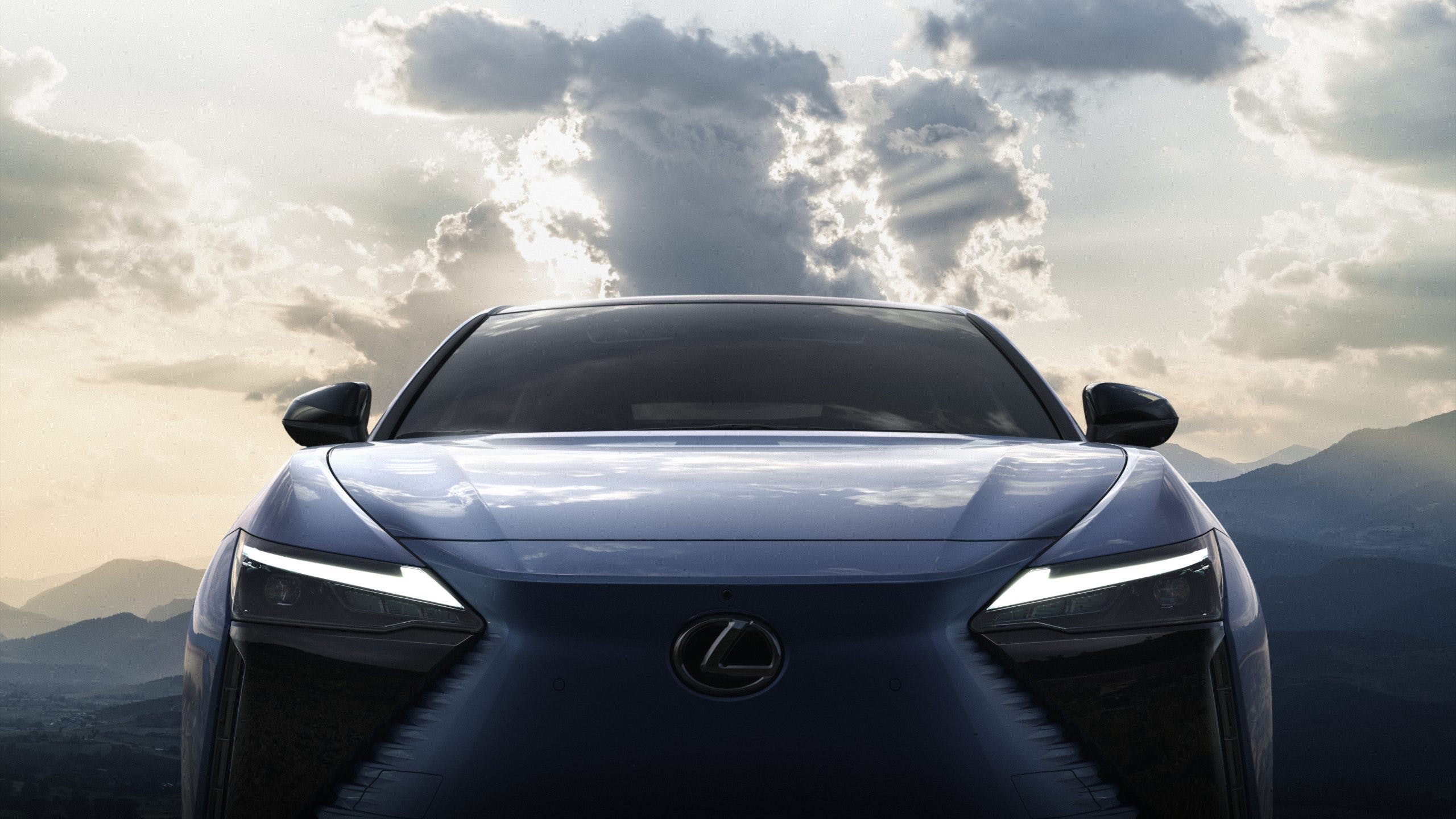 We finally know when the 2023 Lexus RZ 450e will make its global debut and it’s April 20. The crossover has already been shown completely uncovered several times, the first of which was during Toyota’s announcement of its battery-electric vehicle strategy. Lexus was at the forefront of that presentation because it will release over a dozen new BEVs across the brand’s global lineup as part of the Lexus Electrified plan. The RZ is the first of these vehicles and will be part of the first salvo as Lexus aims to be all-electric by 2030.

The 2023 Lexus RZ 450e will spearhead the brand’s BEV offerings. In addition to announcing the reveal date, Lexus also gave us a glimpse of the interior, which features a different setup from the Toyota bZ4X and Subaru Solterra. The center stack is tilted toward the driver and its layout looks similar to that in the new NX. That means this will use the new Toyota/Lexus infotainment system but likely with the larger 14.0-inch screen instead of the 12.3-inch unit used in its mainstream counterparts. The round gear selector remains but the gauge cluster looks traditional. An 8.0-inch display lives within the binnacle and it’s complemented by a head-up display projected onto the windshield. This example also has a yoke instead of a steering wheel but that could be limited to the Japanese market.

Based on the array of exterior photos that Lexus originally released since the Dec. electrification announcement, the RZ retains most of the styling cues from the LF-Z Electrified Concept. The spindle grille has been closed and turned into an outline, giving the crossover Lexus’ signature look. There are also black accents below the headlights just like the show car it’s based on. As typical with most utility vehicles, the RZ has black body cladding on the wheel arches. However, don’t expect this to be as rugged because its ground clearance appears to be quite low just like other electric SUVs like the Ford Mustang Mach-E and Tesla Model Y.

In the back, the RZ 450e has two roof extensions just like the bZ4X and Solterra. However, the rear kickup is more dramatic, further making it look like the vehicle has an integrated spoiler on the liftgate. The full-width LED taillights carry over from the LF-Z Electrified Concept and feature Lexus spelled out across the middle of the tailgate. A blacked-out C-pillar creates a floating roof effect, hinting at the possibility of contrasting roof colors. When you take it altogether, the RZ looks similar to the larger RZ but more carlike.

Lexus hasn’t revealed much regarding the powertrain but based on the name, the RZ 450e will most likely get more power than the Toyota bZ4X and Subaru Solterra. In their most potent form, those two make 218 hp and 248 lb-ft of torque from two electric motors backed by a 72.8-kWh battery. The RZ 450e could offer closer to 300 hp or more to distinguish itself from the mainstream vehicles sharing Toyota’s e-TNGA platform. This could also mean that Lexus will make the dual-motor configuration and AWD standard. Lexus’ Direct4 drive control technology for electrified vehicles will make its first appearance on the RZ. How do we know that? There’s a Direct4 badge on the tailgate. This will allow precise torque distribution between the electric motors and enable torque vectoring via braking.

The 2023 Lexus RZ 450e will start the brand’s journey toward full electrification by 2030. It also wants to expand its BEV sales to 100 percent in Europe, China, and North America, which should total one million units globally. By 2035, Lexus BEVs will make up 100 percent of Lexus’ sales.