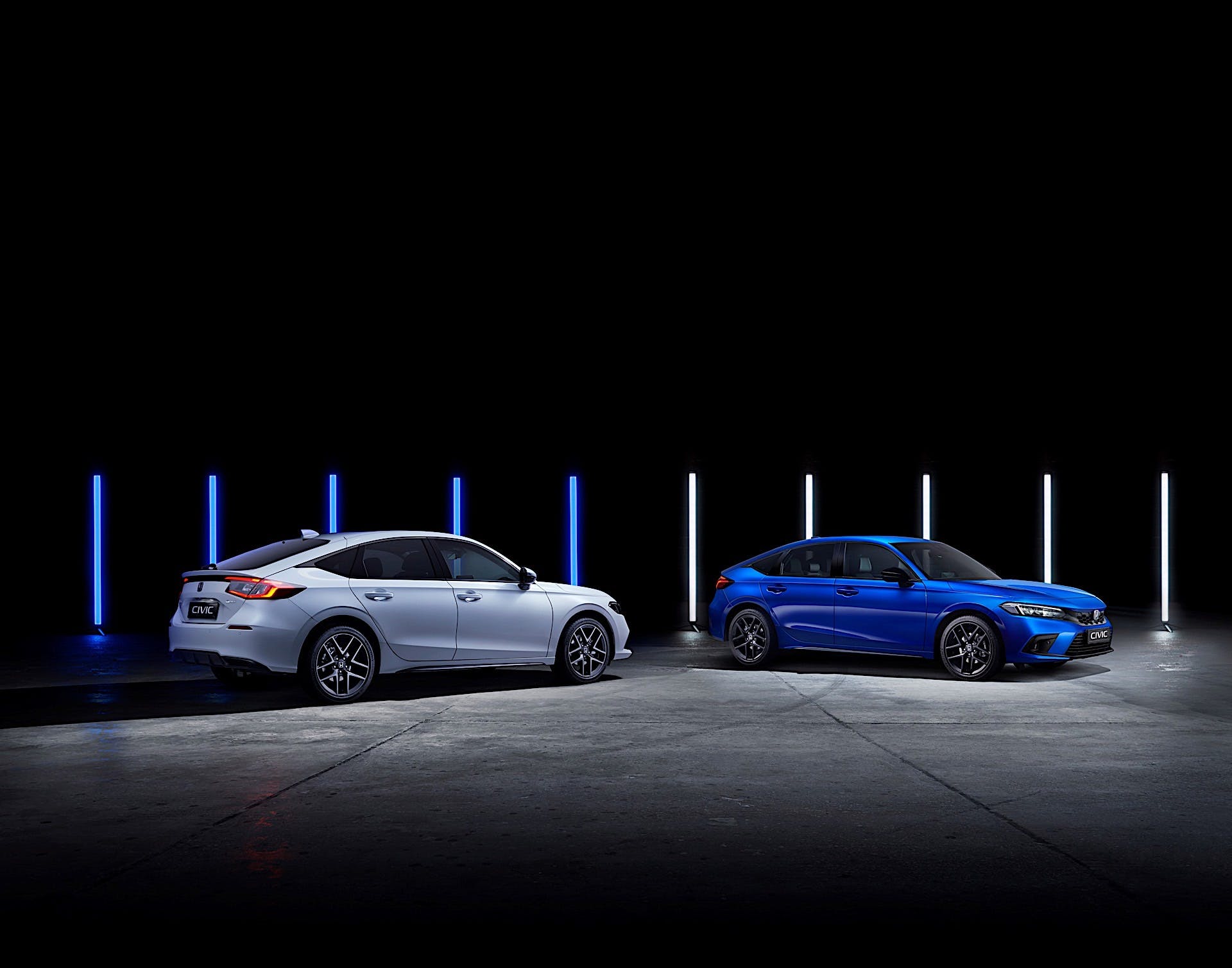 The Honda Civic Hybrid has been revealed and it’s available only in the practical yet stylish hatchback configuration. Its launch marks the electrification of Honda’s offerings in Europe, meaning there’s at least a hybrid in each model line. Now in its eleventh generation, the Civic hatchback sports a longer wheelbase yet it’s 20 percent lighter than its predecessor. The car also lost the Gundam-like exterior styling for a cleaner, more mature look reminiscent of the larger Accord.

Powering the Honda Civic Hybrid is an updated version of the Japanese automaker’s two-motor hybrid system. It uses a new 72-cell lithium-ion battery and two compact but powerful electric motors coupled to an updated 2.0-liter engine running on the Atkinson cycle. If this seems familiar that’s because this is the latest iteration of the same hybrid system found in the CR-V and Accord. This unit has been improved further, enabling it to achieve a thermal efficiency of 41 percent, which Honda claims is the highest in the auto industry for internal combustion engines. The total system output is 135 kW and 315 nm of torque, which translates to about 181 hp and 232 lb-ft. Honda is likely not including the gas engine in its total output calculation for the Civic Hybrid since its larger siblings make this much using only the main electric drive motor.

Other improvements include a new power control unit and a smaller, lighter intelligent power unit that has a higher power density. In the majority of driving situations, the Civic Hybrid relies mainly on its two electric motors for propulsion. That means it’ll drive more like a battery-electric vehicle with a backup plan since the gas engine isn’t always in the picture. A new fixed-gear transmission has also been added to minimize friction and is controlled by the intelligent power control unit.

There will be four drive modes available on the Civic Hybrid. In addition to Eco, Normal, and Sport, there’s a new Individual mode that allows you to customize the engine, transmission, and the available 10.2-inch digital gauge cluster. Like its internal combustion sibling, the Civic Hybrid also gets a revised suspension that’s been optimized for better handling and stability. This is done via a wider rate track, low-friction ball joints, and revised front dampers. It also gets a new structure for the body stabilizing seats along with the latest version of the Honda Sensing driver assistance suite. The latter now includes traffic jam assist and automatic emergency braking that remains active even at parking lot speeds.

Honda aims to speed up its electrification efforts in major markets like Europe, North America, and Japan. By 2040, Honda expects its North American sales to be made up completely of battery-electric vehicles. Its first BEV, a crossover codeveloped with General Motors called the Prologue, is due out in 2024. Acura will also get its first EV the same year as Honda and it too will be based on GM’s Ultium suite. Honda is also gearing up to popularize hydrogen fuel cell vehicles to complement its BEVs. Hybrids will also play a key role in the near future as Honda aims to offer a broad range of electrified options for consumers. Currently, it offers the CR-V, Accord, and Insight with hybrid powertrains in the U.S. Expect that lineup to grow with the addition of new models with the HR-V likely being the next one to get electrified.

Written by Stefan Ogbac
Follow Author
RELATED ARTICLES
Honda will only sell hybrids and EVs in China after 2030
Honda Prologue teased as brand’s first volume battery-electric vehicle
Honda aims to have 100% EV sales in North America by 2040
Do I need a Level 2 home charger for my Toyota Prius Prime?
RELATED ARTICLES
JOIN THE EV PULSE NEWSLETTER
Receive weekly updates on each of our electrifying articles.