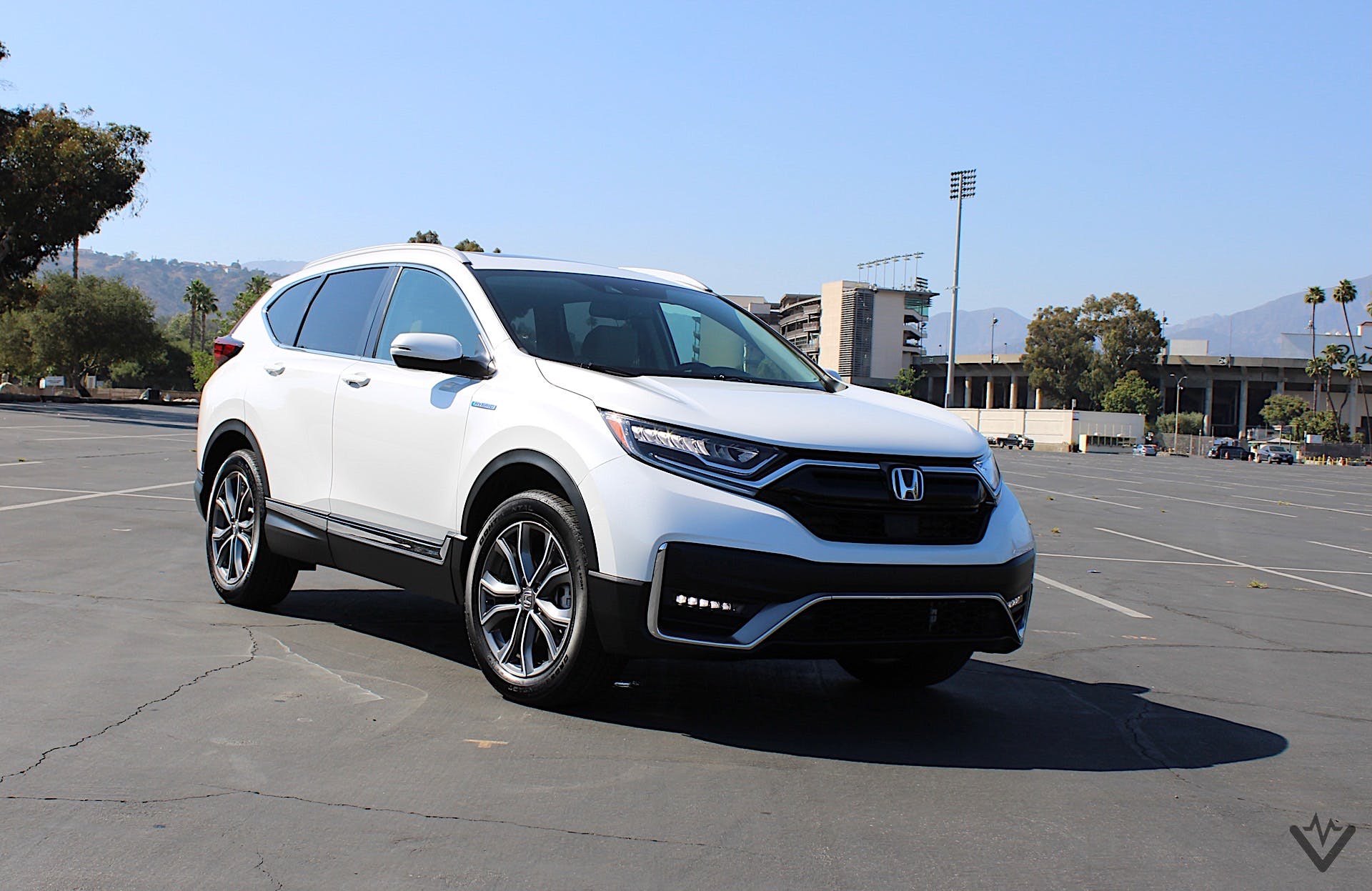 The 2021 Honda CR-V Hybrid may not be the newest entrant in the red-hot compact crossover segment but it still holds its own against recently redesigned competitors. This family hauler aged so well that it remains one of the most compelling propositions in its segment. In hybrid flavor, the CR-V’s appeal grows further. Standard AWD, more power, and better fuel economy? Oh yes, the CR-V is still a formidable opponent, and here’s why.

Car-like would be the best way to describe the 2021 Honda CR-V Hybrid’s appearance. Despite the body cladding, it’s not as rugged as one may think. The upright greenhouse and nearly vertical rear liftgate give the crossover a generous glass area resulting in excellent visibility. Lots of silver trim and headlight clusters that are integrated with the grille give the CR-V the Honda family look. Vertical taillights that curve around the bottom part of the rear window is a tasteful evolution of a design cue that’s graced nearly every generation of the CR-V. Other than blue Honda logos, and hybrid badges on the tailgate and front fenders, the CR-V Hybrid isn’t in your face with its electrified credentials.

Get inside the CR-V Hybrid’s interior and you’ll find plenty of soft-touch materials and padded surfaces. That gives the cabin an upscale feel, especially when you consider that the controls all work with a satisfying level of tactility. Unlike non-electrified CR-Vs, the hybrid ditches the mechanical gear shifter in favor of Honda’s button layout. Good levels of sound insulation keep things hushed on the highway, meaning there’s not much wind and road noise coming through.

For its size, the CR-V Hybrid has a cavernous cabin, comfortably seating four to five passengers and sporting lots of room for your stuff. The flat floor provides plenty of foot space while the upright greenhouse should keep your tall friends from complaining too much. Even with the slightly raised cargo area, you still get a flat surface when you fold the rear seats enabling the CR-V Hybrid to easily accommodate bulky objects. Clever storage solutions like the deep reconfigurable center console bin with a movable tray add extra flexibility and a place for your mobile devices.

The CR-V uses an older version of Honda’s infotainment system. Every model gets a 7.0-inch touch screen, which is small by today’s standard. Response times aren’t very quick and the graphics could be cleaner. At least the menu layout is straightforward and it’s easy to get to what you need. Stick with Apple CarPlay and Android Auto for multimedia duties since those offer a more comprehensive interface. You can upgrade the base audio system to a nine-speaker unit if you opt for the range-topping Touring trim but it’s not as big of a step up as you might think. While clear, it doesn’t immerse the cabin as nicely as competitors’ Bose and Harman units.

Honda Sensing, a suite of driver assistance features, is standard on the 2021 CR-V Hybrid. Despite being an older version, it still works quite well and gently corrects you using subtle steering inputs when you start drifting around. Adaptive cruise control does a fantastic job keeping your set distance, reacting as needed to vehicles cutting you off or whatever the car you’re following does. It’s also quick to respond, meaning once the car ahead moves, the CR-V will do the same while retaining your set distance.

Unlike most hybrids, Honda’s system operates differently because it doesn’t have a physical transmission. The CR-V Hybrid, like the Accord Hybrid, couples a 2.0-liter four-cylinder with two electric motors (one driving the wheels) and a lithium-ion battery for a combined output of 212 hp and 232 lb-ft of torque. You won’t feel or hear any shifting because of the engine’s direct-drive setup.

The way Honda’s hybrid system operates in the CR-V is different from the Accord Hybrid. Why? It weighs 308 pounds more than its sedan sibling and 154 pounds more than a non-electrified CR-V with AWD. You get more gas engine assistance in the CR-V Hybrid during most driving situations to make up for the extra weight. Thanks to the instant torque from the electric motor, there is always power on tap. The CR-V Hybrid doesn’t struggle even when it’s loaded, pointed up a steep hill, or during passing or merging maneuvers. You never feel like you’re short on power when you put your foot down because the powertrain has been calibrated specifically for a heavier vehicle. Unfortunately, winding out the crossover to access its full power causes the engine to get raspy.

Honda was one of the first to make transitions from regenerative to friction braking seamless among hybrids. That doesn’t change in the CR-V Hybrid; you can’t tell where the handoffs occur even during emergency stops. You can also choose between four levels of regenerative braking via the paddle shifters, allowing some degree of one-pedal driving. When going downhill or slowing down to exit the freeway, you can fully or nearly replenish the battery charge via regenerative braking.

The Honda CR-V Hybrid is one of the better handling compact crossovers available. Minimal body roll and a nicely tuned suspension make it more sure-footed than you’d expect a family-oriented crossover should be. Accurate steering further adds to the CR-V’s agreeable road manners, allowing you to easily maneuver it on narrow roads and navigate through turns more confidently. You don’t sacrifice comfort either because the CR-V Hybrid has one of the best balances between ride and handling in its class, giving you compliance without sacrificing agility. Road imperfections are dispatched promptly. You don’t feel any harsh or sharp impacts when going over potholes, ruts, and expansion joints on poorly maintained roads.

Unlike its chief competitor, the Toyota RAV4 Hybrid, the Honda CR-V Hybrid uses a mechanical AWD system. That means the front and rear axles are connected by a drive shaft. It also results in the crossover feeling less like an FWD-based vehicle because you don’t notice the front wheels clawing for grip like it does in an e-AWD setup. Once you accelerate in the CR-V, the AWD system splits power between the two axles to maximize traction.

Prices for the 2021 Honda CR-V Hybrid start at $31,735 for the generously equipped base EX grade. With the extra-cost Platinum White Pearl exterior color, our range-topping Touring test car stickered for $37,920.

The 2021 Honda CR-V Hybrid exemplifies a crossover that’s aged so well it remains one of the best vehicles in its class even at the end of the current generation’s life cycle. Blending efficiency, agreeable road manners, comfort, and practicality, all in a single package, the CR-V does nearly everything well. All that’s left to add now is a much-needed infotainment system update, which is likely due for the next iteration. Like the smaller Civic, the next-generation CR-V has a tough act to follow. The current model put the segment on notice and has remained at the top since its debut nearly six years ago. Honda must continue that momentum for the successor, which we hope will improve on an already winning formula.