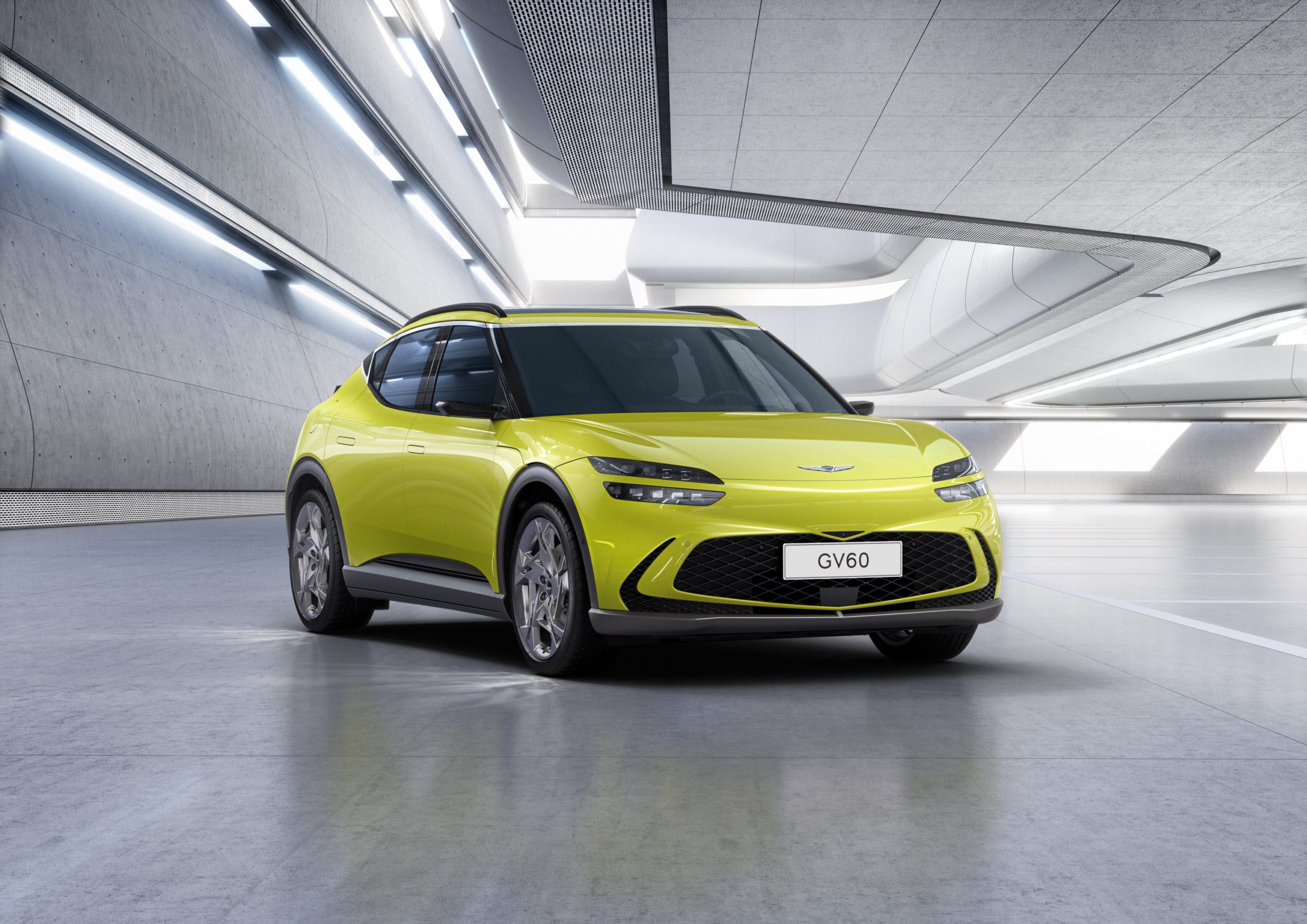 At last, the third vehicle on the Hyundai Motor Group’s E-GMP platform has finally broken cover. The 2022 Genesis GV60, the brand’s first dedicated battery-electric model, has arrived in a shockingly bright shade of yellow and design cues that conjure images of oddball French cars that may have inspired it.

Billed as a sporty crossover, the 2022 Genesis GV60 looks more like a tall hatchback than a utility vehicle. However, you won’t mistake it for anything but a Genesis. The front features a new look with the familiar quad LED headlight strips that have been a signature since they first appeared on the larger GV80. A crest grille in the bottom with black surrounds gives the GV60 a more conventional but angry look.

In the rear, the two-line theme continues with the LED taillights mimicking the headlights. Just like many battery-electric crossovers, the roof starts to slope dramatically from the C-pillar giving it a coupe-like shape. A rear duckbill-like spoiler rounds out the whole design, adding to the car’s unconventional design. The greenhouse also kicks up toward the rear and there’s a neat angular cut out to give it a floating roof look.

The GV60’s interior features a new layout that includes two massive displays housed under a single glass panel. A two-spoke steering wheel is standard along with a new ball-shaped gear selector for the shift-by-wire system that Genesis calls the “Crystal Sphere.” The floating center console doesn’t appear to be connected to the dash, opening up extra space between the driver and front passenger. Perhaps the biggest detail that you won’t miss is the blue interior, which is a sign that Genesis intends to offer more than just the usual black and beige. In the Korean market, the GV60 will also get side cameras instead of mirrors.

Based on the release, it doesn’t seem like Genesis took full advantage of the flat floor afforded by the E-GMP platform. The GV60 seems to have missed out on the lounge recliner-like seats and movable center console found on its platform-mate, the Hyundai Ioniq 5. Its overall interior layout is closer to the Kia EV6’s but with an added emphasis on luxury, in addition to sportiness.

Just like the other two vehicles on the E-GMP platform, expect the Genesis GV60’s wheelbase to be similar in length to vehicles like the Kia Telluride. That should give it generous overall interior volume despite being sized closer to a compact crossover. The GV60 should be capable of charging at 400- and 800-volt capacities, putting it up there with cars like the Porsche Taycan and Audi e-tron GT. This means FC changing from 10 to 80 percent should only take around 20 minutes depending on the battery size.

Genesis didn’t reveal any specs for the GV60 but if we were to look at its Hyundai and Kia relatives, we can expect either 58- or 77.4-kWh battery pack. In the U.S., we’re likely only getting the latter as Genesis positions itself as a luxury brand. The single-motor should have 225 hp and 258 lb-ft of torque, and a maximum range of around 300 miles per charge. Dual-motor versions should get around 320 hp and 445 lb-ft but the overall range may drop to around 260 to 280 miles. A high-performance version is also expected and should be good for roughly 430 hp and a little over 500 lb-ft. However, that will likely have under 250 miles of range per charge.

There aren’t any other details out yet on the 2022 Genesis GV60 but expect it to go on sale in Korea first. The U.S. should follow along with Europe, which is one of the biggest markets for EVs. Following the GV60, Genesis plans to launch several EVs. Its first was the Electrified G80 and its second is the GV60. Next year, the Electrified GV70 is expected to arrive followed by all-electric versions of the next-generation G90 flagship sedan, the GV80, and the upcoming three-row GV90.