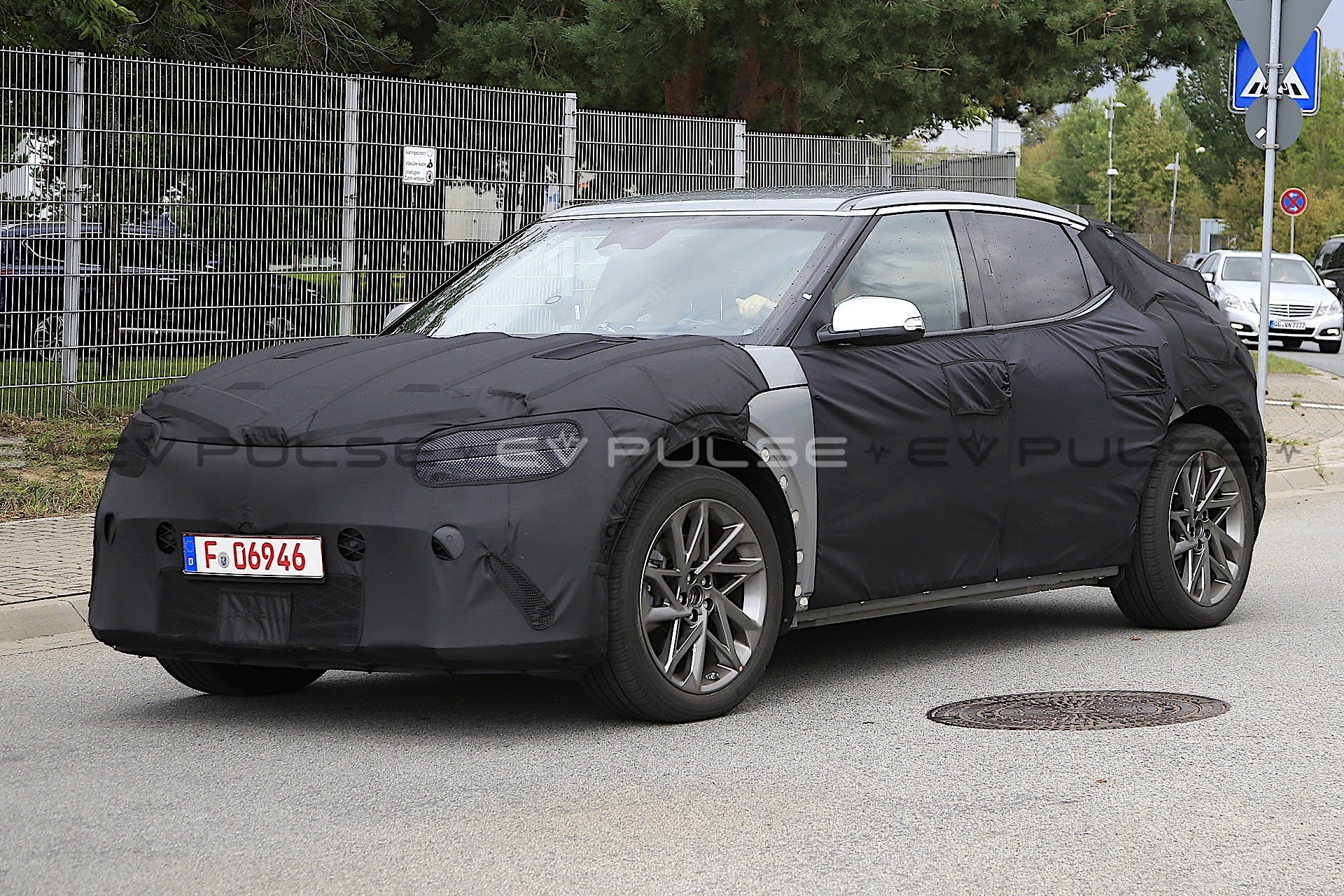 The third vehicle on Hyundai Motor Group’s E-GMP architecture has been caught testing looking quite close to production. Expected to slot below the GV70, the Genesis GV60, code-named JW, will be the brand’s first dedicated battery-electric vehicle. It’s closely related to the Hyundai Ioniq 5 and Kia EV6 but in typical Genesis fashion, it will be more luxurious and sport the two lines design philosophy. Its key competitors will be the Tesla Model Y, Mercedes-Benz EQB, and the Audi Q4 e-tron.

Like the EV6 and Ioniq 5, the Genesis GV60 is a compact crossover. In typical EV fashion, the roofline is low as is the ground clearance, giving it a look more akin to a hatchback. The roofline descends quickly in the rear adding to its liftback-like appearance despite having an upright greenhouse. There’s still a lot of coverings so you can’t see much of the front end. However, if the Genesis Mint Concept is anything to go by, the GV60 will get the most radical take on the dual-strip LED headlights and taillights that have since defined Genesis’ design language ever since the GV80 and second-generation G80 debuted. That look has since expanded to the refreshed G70 and the new GV70 crossover. Eventually, it’ll also find its way to the three-row GV90 and the newest iteration of the flagship G90 sedan. What we can see are the geometric wheel patterns. Like the rest of the Genesis lineup, the GV60 will sport some of the most eccentric wheel patterns, allowing it to stand out more.

Under the skin is where the Genesis GV60 will stand out most. Hyundai Motor Group’s E-GMP platform features 400- and 800-volt bidirectional charging, allowing vehicles on that platform — including the GV60 — to take full advantage of high-powered DC chargers. As a result, it can gulp up energy at a rate of up to 350 kW, allowing it to DC charge from 10 to 80 percent in 18 minutes. Vehicles on this platform can also be used as a power source thanks to its vehicle-to-load (V2L) capability. This means you can run home appliances via a V2L connector plugged into the vehicle.

Expect the Genesis GV60 to get RWD as standard with 225 hp and 258 lb-ft of torque backed by a 77.4-kWh battery. A smaller 58-kWh battery could also be offered but that will likely be for markets outside of North America. Dual-motor versions should get 320 hp and 446 lb-ft just like the Hyundai Ioniq 5 and Kia EV6. EPA range estimates will likely fall somewhere between 245 to 300 miles depending on the configurations.

Genesis will also add a high-performance version of the GV60 that’s along the lines of Kia’s EV6 GT. However, it will be appointed more luxuriously to distinguish it as the more upscale cousin. The two electric motors should still make 576 hp and 545 lb-ft of torque combined. Adaptive dampers, a limited-slip differential, and summer tires should be part of the package too. The stickier rubber could cut the GV60’s overall driving range on a single charge down significantly. Fellow Hyundai Motor Group brand Kia expects its EV6 GT to only get a 235-mile rating from the EPA.

The Genesis GV60 is expected to debut later this year as a 2022 model with production for the Korean market soon after. Expect it to arrive in North America in early 2022 with the mainstream models likely arriving first. The GV60 won’t be the first Genesis EV, though. That title goes to the Electrified G80, which was revealed at the 2021 Shanghai auto show this year. An Electrified GV70 is set to follow the GV60 and G80