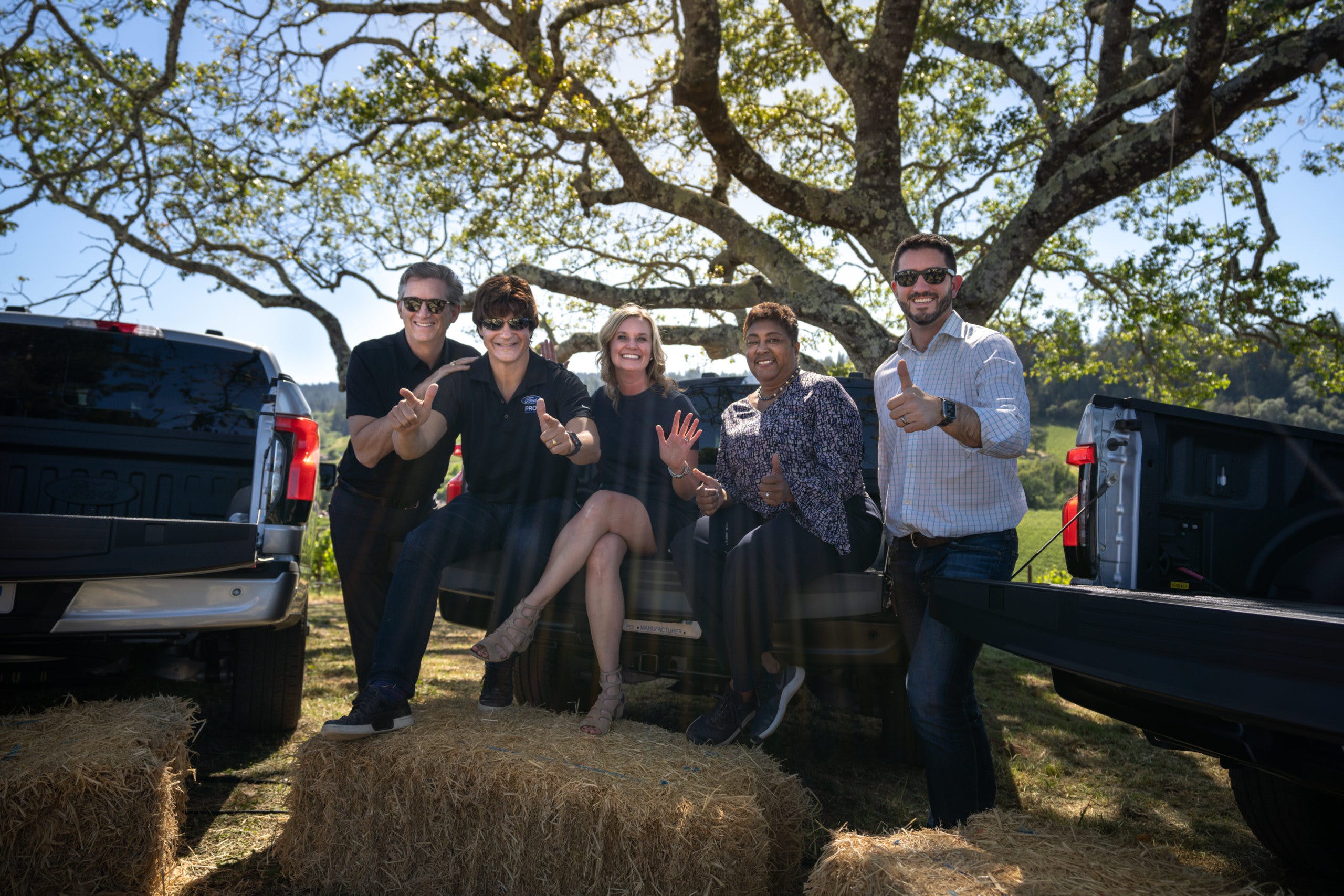 (Second from left) Cannis, 55, is the CEO of Ford Pro. Photo credit: Ford

Standing in the warm, California sun, with sunglasses reflecting the rows of grape plants strung in the distance, ridiculously perfect hair blowing in the Sonoma County breeze, Ford Pro CEO Ted Cannis is reflecting on the question of the ages, “Is a hot dog a sandwich?”

Of course he says it isn’t — which is correct even if the dictionary states otherwise — but adds the loosely held caveat to his statement.

Cannis, aged 55, is the head of Ford’s most important new business unit. Ford Pro is the commercial arm of the Ford Motor Company, and while the topic might be not sexy to the outside public, fleet and commercial business is where Ford makes its real money. “Hair Force One,” we lovingly call him (as an homage to Apple’s Craig Federighi) is charged with consolidate many aspects of the commercial world under one roof, focusing on software and integration, while also convincing customer electric work vehicles are the way to go. He’s literally building the entire ecosystem of the future for Ford.

For Cannis, the philosophy major turned business leader, world building comes easy to him. One of the things you quickly learn when talking to him, regardless of the situation, is that he’s an incredible storyteller and can make any topic sound interesting, including electric cargo vans and advanced telematics.

From a very young age, Cannis was into strategy and world building games, especially Dungeons and Dragons. Still an active player today, his Twitter account pivots between official Ford Pro business and games he’s a Dungeon Master for.

“I’m always the DM,” he tells us. “I love building out the world and setting up the scenarios.” He also mentions that the Sid Meier’s Civilization series is also a favorite of his.

At an event in Sonoma County about the partnership Ford has with the local wine growers, Cannis talks about how Ford Pro is combining of various business units and companies under one roof.

“Everything from purchasing a vehicle, licensing telematics, building a charging depot, and even financing the purchase can be handled by Ford Pro,” he tells a gaggle of journalists.

Getting business units to talk together is one thing, bringing everyone in house is entirely another.

“World building,” he says to us.

Taking a hundred year old company and changing its ways isn’t easy. Former CEO Alan Mulally introduced the One Ford system, improving communications and teamwork throughout the company, but Cannis is tasked with even more. Plucked from the Team Edison skunk works, his job is to convince customers that their business can be more profitable, more efficient, and more environmentally friendly through software. As if that wasn’t enough, he also has to launch commercial versions of the electric E-Transit van and the Pro versions of the Ford F-150 Lightning.

“Electrification is easy,” he tells us. It’s the software, the integration, and bringing everything together which is the real challenge for Cannis.

A true modern Renaissance man, Cannis has an incredible personal and professional life. He’s worked all over the world in various roles for Ford, plus in his personal life he has even summited Mount Kilimanjaro.

We ask, “Would your younger self believe where you are now?”

“No. He’d be surprised I was in the auto industry.” He goes on to tell us that he expected to be in accounting when he was younger, and his graduate degree is even in business finance.

The Ford Pro transformation is no small undertaking, and it takes an entire team of dedicated people to take ownership in various parts of the process. It also takes excitement.

It also takes leadership to have the vision of where the business needs to go, and the world building skills to bring it all together. It also takes someone to tell the story in an interesting and exciting way.

“This is the time,” Cannis says. He believes his skills make him uniquely suited for the job. Spending any amount of time around him and you quickly realize he’s likely speaking the truth.

Who said gaming wouldn’t be useful in real life?