2022 Hyundai Ioniq 5 vs. the competition: How does the new Korean player stack up? 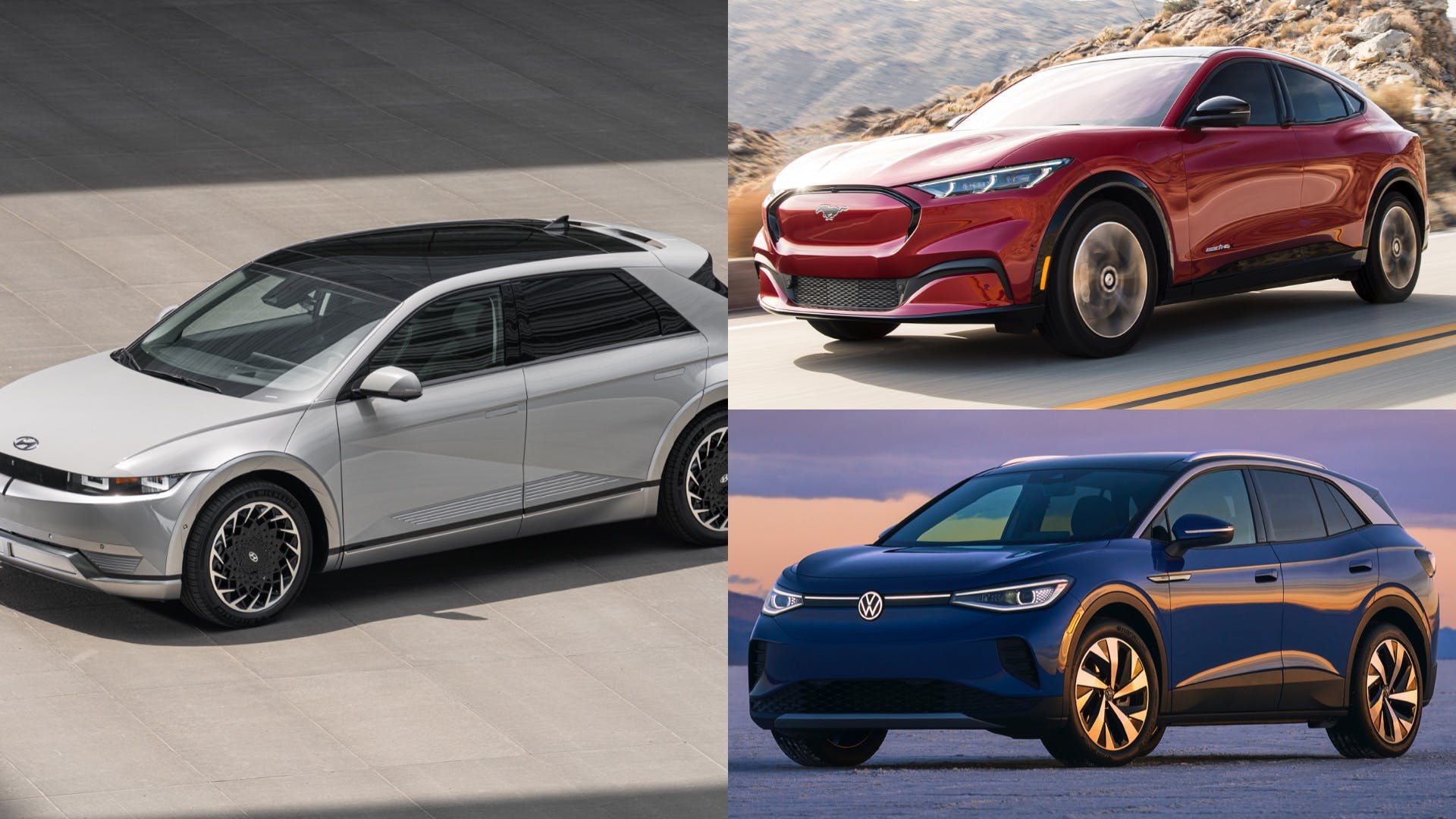 It’s no secret that the 2022 Hyundai Ioniq 5 is aimed squarely at the Tesla Model Y. With the E-GMP platform’s ability to DC charge at 400- and 800-volts, and an estimated range of 300 miles in the single-motor version with the 77.4-kWh lithium-ion battery, there’s no denying this crossover’s main bogey. With that said how does the Ioniq 5 compare to other battery-electric vehicles in that segment? While we can’t do a formal comparison test yet, let’s check and see how they stack up on paper.

That’s not the whole story, though because, at 118.1 inches, the 2022 Hyundai Ioniq 5’s wheelbase is the longest. The Mustang Mach-E’s is 0.6 shorter while the Model Y is 4.3 inches shorter. Of the four EV compact crossovers currently in the market, the Volkswagen ID.4 has the shortest wheelbase at 108.9 inches, putting it in the same ballpark as internal combustion counterparts like the Tiguan.

2022 Hyundai Ioniq 5 vs. the competition: Interior

Hyundai uses the Ioniq 5’s long wheelbase to maximize interior space and flexibility. The E-GMP platform enables a flat floor thanks to the battery being mounted under the passenger cabin. As a result, the Ioniq 5’s rear seats slide forward and back and feature 60/40 folding seat backs for additional practicality. A trick sliding center console gives you extra convenience and can even fit a handbag and has four additional USB charging ports plus a 15-watt wireless charger.

You’d think the long-wheelbase would benefit cargo capacity but it appears that the Ioniq 5 doesn’t quite stand out in that area. With all seats up, there are 27.2 cubic feet of volume. Fold the second row and that grows to 59.3 cubic feet. The Mustang Mach-E has slightly more space at 29.7 cubic feet with the rear seats in place and up to 59.7 cubic feet with them down. The Mach-E also has a 4.7-cubic-foot frunk. We don’t know how big the Ioniq 5’s frunk is but it’ll likely be smaller than the Mach-E’s.

The 2022 Ioniq 5 will get all of the latest tech features that Hyundai currently has. That means it’ll be offered with a dual-display layout featuring a 12.0-inch digital gauge cluster and a similarly-sized main touch screen. Hyundai will also implement an augmented reality head-up display for the first time on the Ioniq 5. The latest version of the Smart Sense driver assistance suite will feature Highway Driving Assist II, which will include automatic lane changing and the ability to react when another vehicle cuts you off.

Ford will be one of the few automakers to offer hands-free semi-autonomous driving capabilities early. In addition to the latest version of its Co-pilot 360 2.0 driver assistance suite, Blue Cruise will allow you to drive hands-free on over 100,000 miles of roads dubbed hands-free blue zones. The SYNC 4A interface is standard on the Mach-E, featuring a massive 15.5-inch touch screen and a 10.2-inch digital gauge cluster laid out similarly to Tesla’s minimalist dash with a similarly sized display housing nearly every infotainment function.

Quite possibly the most conventional configuration is the Volkswagen ID.4’s. Why? It uses a 10.0- or 12.0-inch main touch screen and a small display serving as the gauge cluster that’s integrated with the steering column. The ID.4 gets Volkswagen’s IQ. Drive active safety suite, which includes Travel Assist. That bundles together adaptive cruise control and lane centering, allowing the car to keep you in your lane, adjust speed limit based on posted signs and maintain your set distance from other vehicles.

Tesla’s Model Y gets the Autopilot driver assistance suite standard. You can further upgrade it to the so-called “full self-driving” package, which adds the summon capability, automatic lane changing, and navigate on Autopilot. Like its sedan sibling, the Model 3, the Model Y houses all of its infotainment functions and then some on a 15.0-inch touch screen on the dash.

2022 Hyundai Ioniq 5 vs. the competition: Powertrains

Hyundai has only revealed the output of Ioniq 5s equipped with the optional 77.4-kWh battery. Single-motor models are rated at 225 hp and 258 lb-ft of torque while dual-motor variants are good for 320 hp and 446 lb-ft. That’s more powerful than the Volkswagen ID.4, which is rated at 201 hp and 229 lb-ft for the single-motor version. Volkswagen has revealed that the dual-motor ID.4 will make 302 hp; however, it hasn’t revealed how much torque it makes. At 250 to 260 miles per charge, the Volkswagen’s range is also significantly less than the Ioniq 5’s estimate of 300 miles for the single-motor long-range configuration. Hyundai expects the Ioniq 5 dual-motor long range to get a 269-mile rating from the EPA in SE and SEL trims or 245 miles in the range-topping Limited.

The Ford Mustang Mach-E is more powerful than both the Ioniq 5 and ID.4. With the standard 68-kWh battery, the RWD models make 266 hp and 317 lb-ft while opting for AWD boosts torque to 428 lb-ft. The California Route 1 and RWD Premium trims further boost output to 290 hp while the AWD Premium is good for 346 hp thanks to the larger 88-kWh battery. Two performance models will be available, both of which have 480 hp and the larger of the two batteries; however, the standard GT is rated for 600 lb-ft while the GT/ Performance Edition has 634 lb-ft. The added power comes at the cost of range as Ford is only targeting an EPA rating of 250 miles for the GT and 235 miles for the GT Performance Edition. The Premium RWD and California Route 1 Edition have the longest range at 300 and 305 miles respectively followed by the Premium AWD with the larger battery at 270 miles. Models with smaller batteries are good for 230 miles in RWD form and 211 miles with AWD.

Tesla’s Model Y also offers potent power with the Performance model rated at 456 hp and 497 lb-ft. The Long-Range model is good for 384 hp and 376 lb-ft while the recently discontinued Standard Range version was rated at 283 hp and 307 lb-ft. According to the EPA, the Model Y Long Range is good for 326 miles while the Performance variant is rated at 303 miles. The old Standard Range model was EPA-certified for 244 miles per charge.

Among upcoming EVs, the Kia EV6 will cover a broader range of performance needs, offering the same powertrain options as its E-GMP platform-mate, the Hyundai Ioniq 5. Where Kia diverges is at the top end because it’s offering a high-performance model called the EV6 GT, which has 577 hp and 545 lb-ft. That model is expected to be able to hit 60 mph in around 3.5 seconds and is targeting an EPA range rating of 235 miles, which is similar to the Mustang Mach-E GT Performance Edition.

A quick look at the 2022 Hyundai Ioniq 5 and its competitors that at least on paper the angular crossover splits the difference between the more pedestrian Volkswagen ID.4 and Ford Mustang Mach-E and Tesla Model Y, both of which offer sportier variants. The Ioniq 5 appears to be leaning on its flexibility, eye-catching style, and technology to make a case for itself. Whether that’s enough remains to be seen and we’re looking forward to driving the Ioniq 5 when it arrives on U.S. shores later this year.