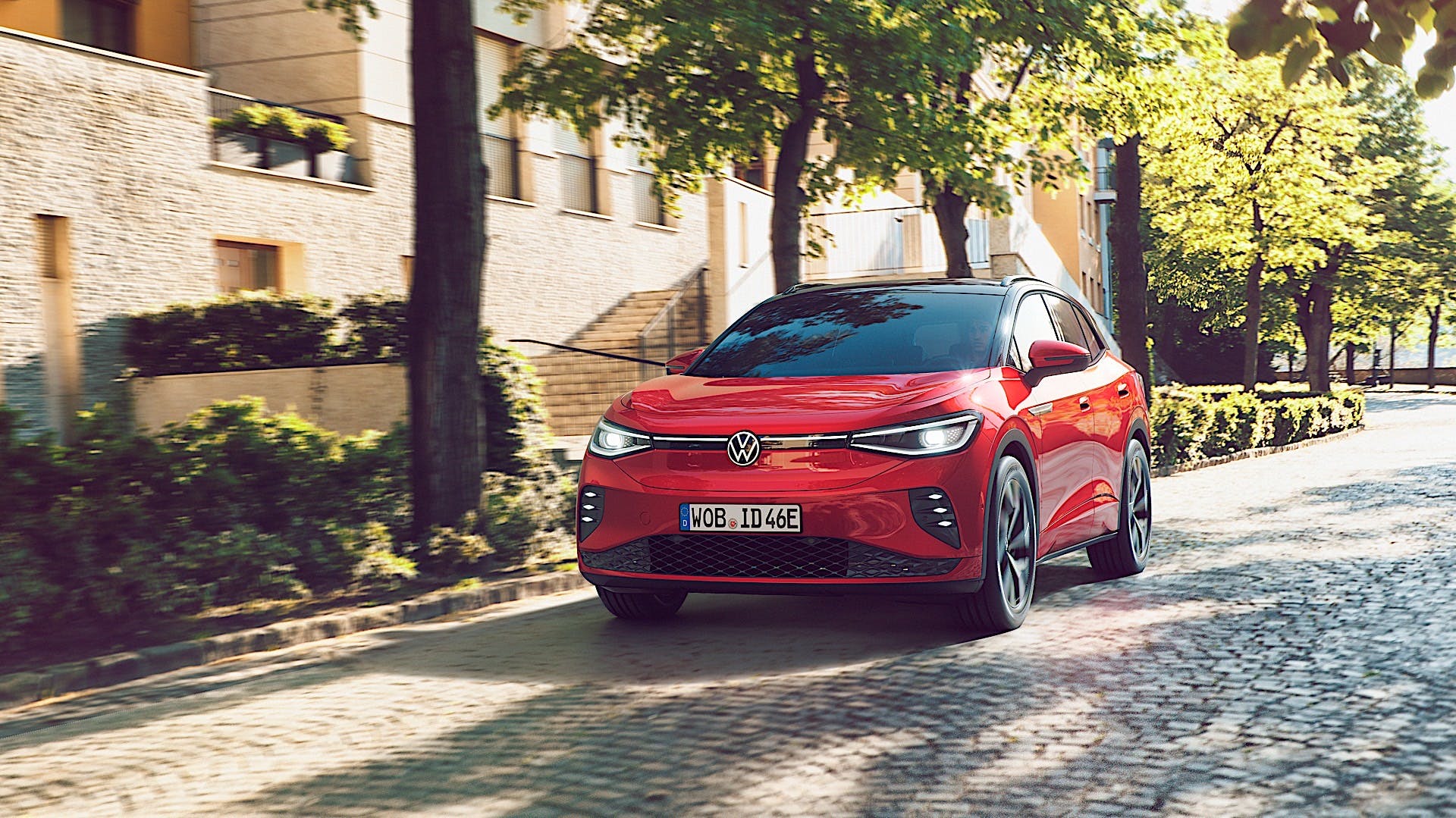 It was just last week that the Volkswagen ID.4 became the first electric vehicle (EV) to win the World Car of the Year award and now its new GTX variant gives the ID.4 something else it has never had.

The ID.4 GTX, which will hit European showrooms next quarter, moves the ID.4 EV crossover from a rear-wheel drive to an all wheel drive, thanks to electric motors on both axles.

Using the same running gear and MEB (Modular Electric Matrix) platform as the Audi Q4 e-tron and the Skoda Enyaq iV, the ID.4 GTX will have 300 horsepower and 339 lb-ft of torque.

Volkswagen insists that will be enough to propel the 4738 lb five-seater to 62 mph in 6.2 seconds on its way to an electronically limited 180 km/h top speed.

Only available with the largest lithium-ion battery (77kWh) in the ID.3’s three-battery arsenal, the ID.3 GTX tops out at a WLTP-cycle range of 300 miles (480 km).

Volkswagen guarantees the 24-cell battery will charge to a minimum of 70 percent of its new capacity after 100,000 miles or eight years, even with 125kW charging rates.

While there is an all-wheel drive version of the ID.4 headed for North American showrooms by late this year, the GTX will only be built in the Zwickau, Germany plant and there are no plans to export it beyond Europe and the United Kingdom.

North American ID.4s, in both rear- and all-wheel drive, will be built at Chattanooga, Tennessee. The EV will also be built in Anting, China, for the world’s biggest EV market.

Interestingly, the ID.4 GTX will retain the standard ID.4’s strongest synchronous electric motor (good for 320Nm or 240lb-ft) and it adds an asynchronous, 162Nm (120lb-ft) motor on the front axle.

Each of the motors drives its own axle via a single-speed gearbox, and Volkswagen insists it consumes between 18.1 and 19.1 kWh per 100 km (62 miles).

It is even tow rated, with Volkswagen confirming it can pull 2646lb.

It runs large front disc brakes, (358 mm, or 14.09in), but drum brakes in the rear. That’s largely, Volkswagen argues, because the electric motors use the first 0.3G of deceleration to recharge the battery cells.

It will cost €50,415 in Germany, which is rising into significant money, but it is stacked with most of the ID.4’s tricks and then some more.

The GTX version will come with the Matrix LED headlights as standard equipment, along with 3D LED taillights. Eleven of each headlight’s 18 LEDs can be switched off or dimmed to maintain night vision without blinding oncoming traffic.

The driver has a 5.3-inch digital instrument cluster above the steering wheel, and there is a 10in touch screen (or optional 12in unit) for the rest of the car and for interior and driving functions.

Oddly, Volkswagen virtue signals the ID.4 GTX’s cabin with its animal-free seats and the materials made from recycled PET bottles, but admits to running a heated leather steering wheel.

The GTX also has adaptive damping as an option, along with the augmented-reality head-up display inside, and there are five driving modes that range from long range to comfort to sport.

It’s part of Volkswagen’s €45 billion spend on electromobility development in the next five years, with Volkswagen insisting 70 percent of its total automotive capacity will be electric by 2030.

Written by Michael Taylor
Follow Author
JOIN THE EV PULSE NEWSLETTER
Receive weekly updates on each of our electrifying articles.