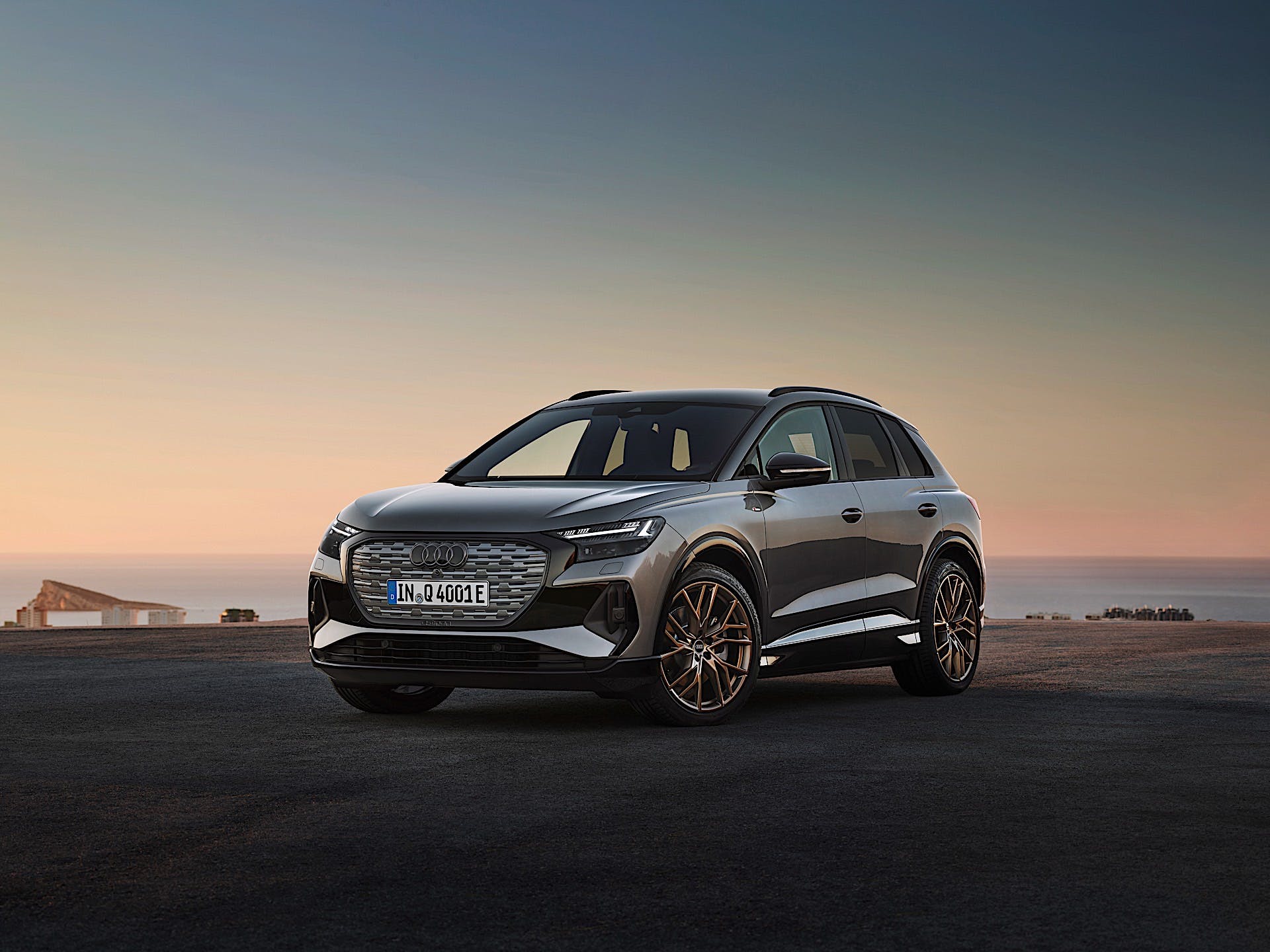 Audi has finally unveiled the next addition to its all-electric lineup: the 2022 Q4 e-tron. Like the larger e-tron slotting above it, the Q4 e-tron will be available in standard and Sportback guise, the latter of which features a coupe-like roofline. Both models look like shrunken versions of their bigger siblings featuring enclosed single-frame grille, short overhangs, and staggered tires. However, the Q4 e-tron and Sportback e-tron have their own identity thanks to a slightly more assertive look. At 4.59 meters or 180.7 inches long, the Q4 e-tron lands squarely in the highly competitive luxury compact crossover segment.

Step inside the 2022 Audi Q4 e-tron and Q4 Sportback e-tron’s interior and you’ll find a driver-centric dash layout. The main 10.1-inch touch screen is angled toward the driver and is coupled with a 10.25-inch digital gauge cluster and an augmented reality head-up display. There are lots of clever storage solutions like the space between the driver and front passenger, and a neat bottle holder on the door. Cool styling cues like the steering wheel with a flat top and bottom, add a sense of style. Unlike some Audi models, the Q4 e-tron and Q4 Sportback e-tron’s controls are a mix of physical buttons and a single display instead of haptic feedback buttons and multiple screens.

When it goes on sale in late 2021, the 2022 Audi Q4 e-tron and Q4 Sportback e-tron will start at around $45,000 before federal tax credits and state incentives. It’ll be offered in single- or dual-motor configurations. Single-motor versions will have 150 kW or 201 hp while the dual-motor ones have 220 kW or 295 hp. The latter will only be available in the Q4 e-tron 50 Quattro and Q4 Sportback e-tron 50 Quattro models. For increased efficiency, the front electric motor in the dual-motor models will only come into play when you need more power or traction. That means when it’s not needed, the front electric motor won’t use any battery charge. The rear electric motor, on the other hand, is similar to the one found in the e-tron GT.

Regardless of the variant you choose, the Q4 e-tron and Q4 Sportback e-tron get an 82-kWh battery with 77-kWh usable capacity. An onboard heat pump uses wasted heat from high-voltage modules and ambient air to control the climate in the interior. Using a level 2/240-volt AC charger, the Q4 e-tron and Q4 Sportback e-tron can charge at 11 kW. A level 3 DC charger allows for 125-kW charging. According to Audi, it expects the Q4 e-tron to get an EPA rating of 250 miles per charge.

Audi will produce the two Q4 models in its Zwickau, Germany facility, which is a carbon-neutral plant that uses renewable electricity. Unavoidable emissions will be offset with climate protection projects certified by the TÜV, Germany’s authority for project testing and certification, and will be designed to meet the Gold Standard Foundation’s high standards. Audi will also work with suppliers working to lower their carbon footprint.

Trim details and additional pricing info will be announced closer to the Q4 e-tron and Q4 Sportback e-tron’s on-sale date.