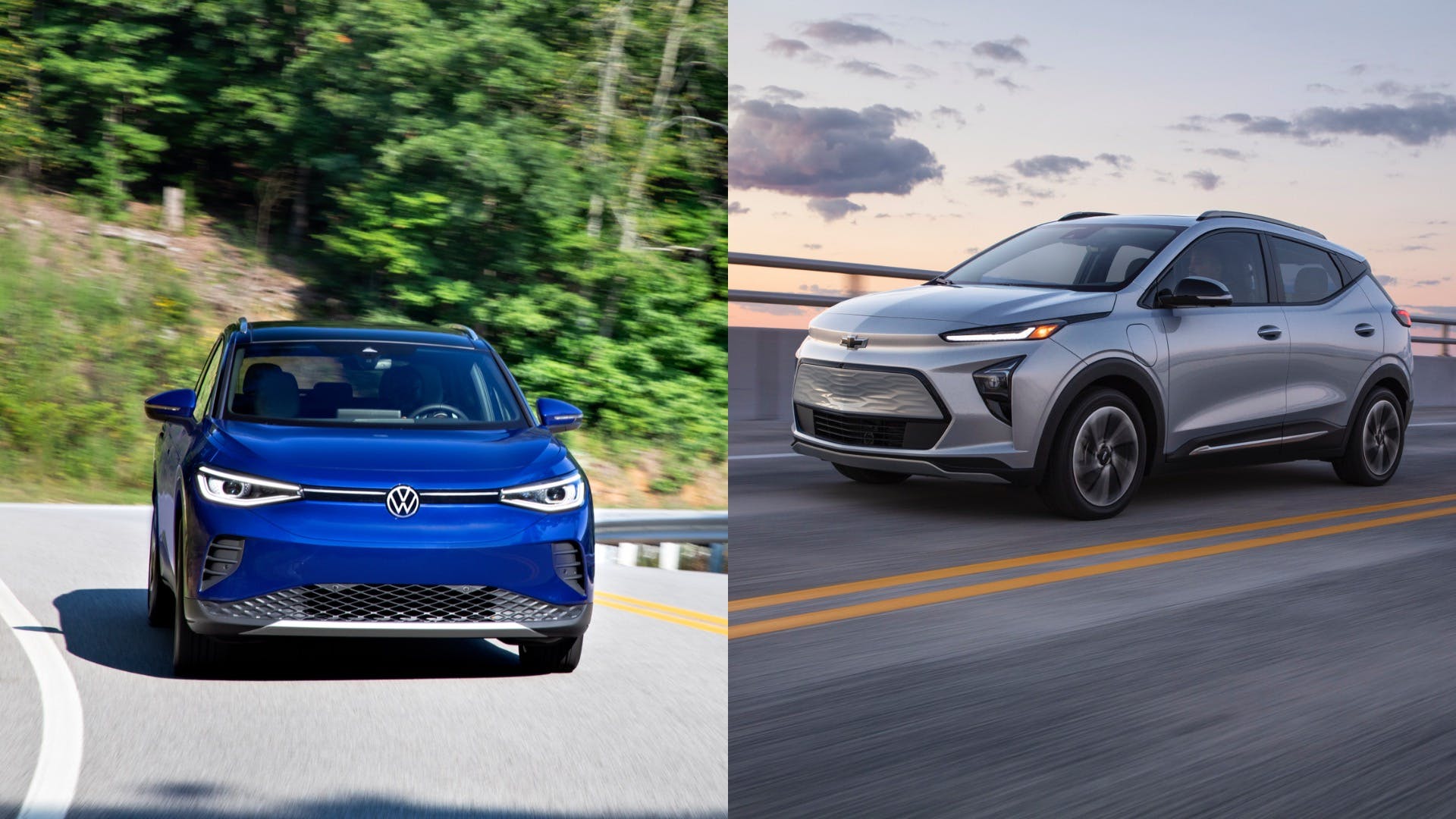 As crossovers proliferate through every segment of the market, automakers have used that body style to expand the reach of their battery-electric vehicles. The 2021 Volkswagen ID.4 and 2022 Chevrolet Bolt EUV are the latest additions to that growing list and both vehicles promise a lot of substance for the money. So, which one should you get?

The 2021 Volkswagen ID.4 and 2022 Chevrolet Bolt EUV approach design differently. Volkswagen uses soft lines and curves extensively, giving the ID.4 a bubbly profile and a friendly, approachable face, especially with the rounded headlights. A low roofline gives the ID.4 a sleek profile yet it’s still upright enough to not impact interior volume. In the back, you get full-width LED taillights and a nearly vertical hatch, giving the ID.4 a more traditional crossover look.

In comparison, the 2022 Bolt EUV is smaller, putting it a segment below the ID.4. However, it’s also upright, meaning it doesn’t have that low-slung roofline found in most battery-electric crossovers. The rear has split taillights and black trim around it to make it look like the rear window extends lower than it is. Where the Bolt EUV distinguishes itself is in the front fascia. Like the refreshed Bolt EV, the Bolt EUV sports the split headlight design meaning the main projector is mounted lower and the LED daytime running lights are higher up. This gives the Bolt EUV a cool, angular look, especially with the lack of a traditional grille.

The ID.4 and Bolt EUV have interiors that are simple and minimalist. The latter is more conventional with physical buttons and knobs to go with the 10.2-inch touch screen. Volkswagen went for a futuristic look, using haptic feedback controls instead of conventional ones. As a result, you get a clean modern cabin in both vehicles complete with lots of creature comforts, supportive seats, and a roomy second row.

Being the larger vehicle, the ID.4 has more room for bulky items with the seats up or down. The Bolt EUV is spacious for its size but keep in mind that it’s a segment smaller, which means you won’t fit as much as in the larger ID.4 despite having lots of room for people and gear. You also get lots of nifty storage solutions including a big cubby between the driver and front passenger on both vehicles. The Volkswagen also has a reconfigurable center console with removable cup holders.

Both vehicles can seat four comfortably; even with the optional glass roof or panoramic moonroof, there’s enough headroom for adults of all sizes. Where Volkswagen takes the lead is in sound insulation. On the highway, there’s barely any noise entering the cabin even with the optional 20-inch wheels. The Bolt EUV has more road and tire noise on the highway but not to the point that it’s intrusive.

If you’re looking for the most user-friendly infotainment system, the Chevrolet Bolt EUV should be at the top of your list. General Motors’ latest user interface is responsive, and intuitive, meaning there’s virtually no learning curve. Nothing is buried under multiple submenus and the graphics are nice and crisp. The available seven-speaker Bose audio system is also better balanced than the standard unit in the ID.4 which also has the same speaker count.

The ID.4’s infotainment system is also quick and responsive but the lack of physical controls makes it harder to use. You also have to look away a lot to see what you’re pressing. Additionally, most features are either where they should be, like the defroster and defoggers, or are multiple submenus in. Even a simple task like changing the fan speed for the climate controls requires going into the main display.

GM’s Super Cruise is perhaps the best semi-autonomous driver assistance feature around. Although the Bolt EUV doesn’t include automatic lane changing, it’s still able to navigate roads incredibly well, take turns on the highway, and adjust to the flow of traffic seamlessly. In case it needs you to take over, it’ll alert you with an audible and visual warning.

Volkswagen’s Travel Assist also does a good job but its ability to react isn’t as immediate as Super Cruise in the Bolt EUV. It also requires you to add more steering input when taking turns, requiring more driver involvement. The way it monitors traffic around you is nearly as proactive as Super Cruise, allowing it to respond to other vehicles’ actions quickly, especially if they cut you off.

The Bolt EUV’s tidier dimensions allow it to easily dart through tight spaces. Together with the low center of gravity, communicative steering, and tight suspension calibration, it handles better than expected. Its ride, however, is a little stiffer and the suspension isn’t as adept at absorbing road imperfections as the ID.4. The ID.4 is the more comfortable of the two because its chassis handily absorbs imperfections and you don’t feel any harsh impacts. That doesn’t mean the ID.4 sacrifices handling because it’s still confident through turns and has accurate steering.

Where the Bolt EUV gains a slight edge over the ID.4 is in acceleration. The Chevy has 200 hp and 266 lb-ft of torque going through the front wheels while the single-motor, rear-drive ID.4 is rated for 201 hp and 229 lb-ft. While both aren’t lacking, the Bolt EUV is more assertive because it’s lighter. The Volkswagen ID.4, on the other hand, is smoother and more relaxed with its power delivery.

If you’re looking for an EV with one-pedal driving capability, the Bolt EUV should be on that list because you can enable that with a single press of a button. The ID.4’s B mode enhances regenerative braking but it’s not enough for full-on one-pedal driving. As a result, you get a more conventional driving experience in the Volkswagen, adding to its traditional compact crossover feel. Regardless of which one you get, transitions between regenerative and mechanical braking are seamless, meaning you’re not going to get jolted if you have to stop suddenly.

Being the newer crossover, the ID.4 wins the charging contest with a peak DC charging rate of 125 kW. That allows it to charge from 5 to 80 percent in 38 minutes. The Bolt EUV’s DC charging peaks at 55 kW, allowing it to gain back 100 miles in 30 minutes. Getting to 80 percent takes about an hour in the Bolt EUV. Using a level 2 AC charger or 24-volt outlet will get you a full charge in roughly 7 hours via the 11-kW onboard charger on both vehicles.

The 2022 Chevrolet Bolt EUV costs $33,995 for the base LT model. Load up a Premium and you’re looking at paying around $44,000 especially if you get the Super Cruise and the Sun and Sound packages. General Motors no longer has available tax credits but its cars are still eligible for state incentives.

The 2021 Volkswagen ID.4 starts higher at $41,190 for the base Pro trim. Load up a single-motor Pro S grade and you’re looking at around $46,000. One advantage that the ID.4 has is that it’s offered with AWD; however, you will pay $44,875 for a base Pro or closer to $50,000 if you get a loaded Pro S with the Gradient package. Volkswagen hasn’t used up their tax credits yet, meaning the ID.4 is still eligible for the full $7,500 plus available state incentives.

Both the 2021 Volkswagen ID.4 and 2022 Chevrolet Bolt EUV offer compelling reasons to get them. While they’re not direct competitors, they each have strengths that may make one or the other a better fit for your life. The ID.4 is larger and more comfortable, making it family-friendly while the Bolt EUV is the better choice for those who need space in a smaller package or want the best semi-autonomous driver assistance tech. Regardless of which one you get, make sure you pick the one that fits your life best because both are quite good at their respective missions.