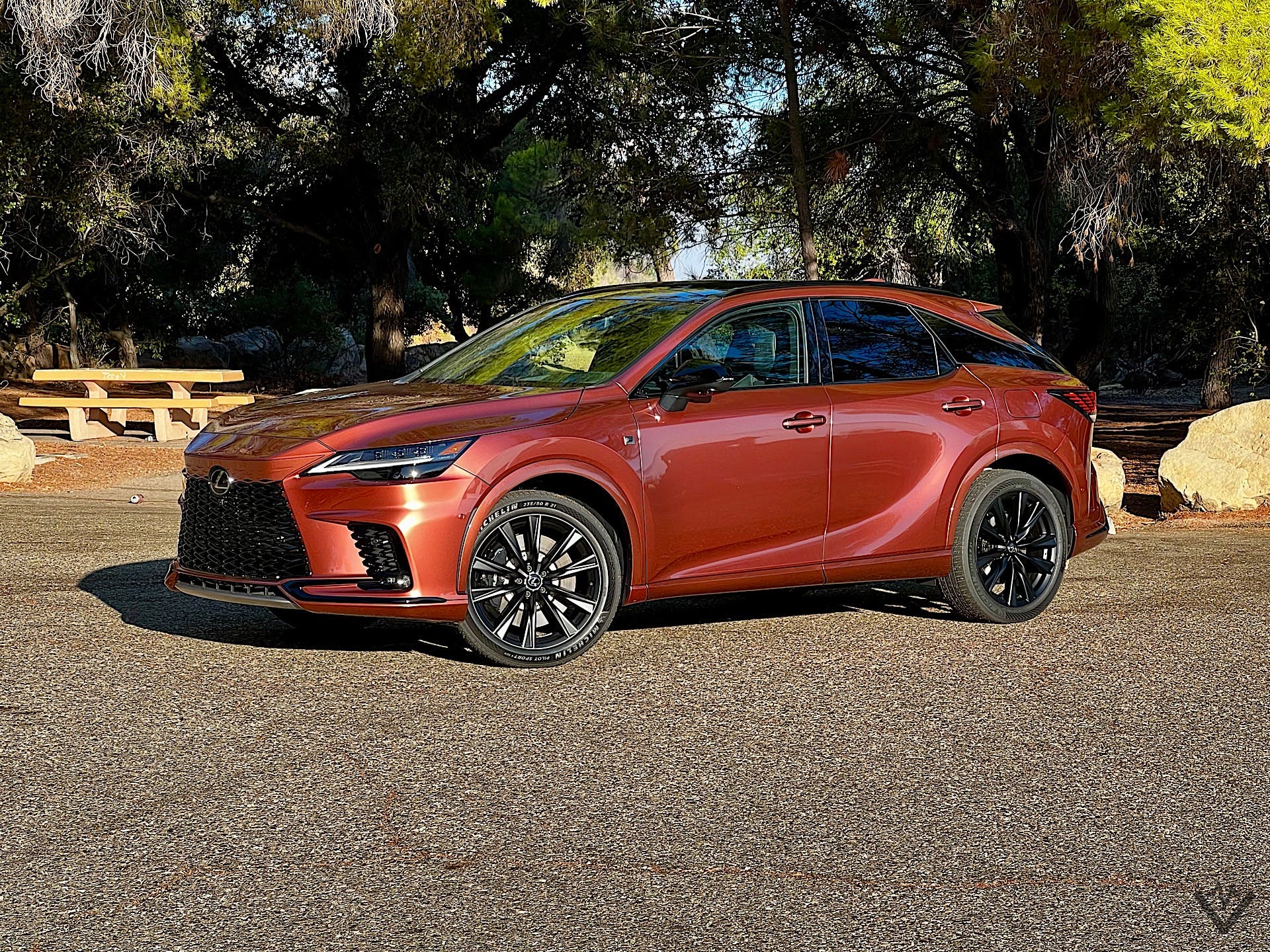 Lexus open brags that it was the company that invented the luxury crossover segment with the RX. Being an OG in a world swarming with competition can be difficult, because Lexus has to keep the product fresh without alienating its customer base.

The 2023 Lexus RX does a respectable job at walking that line, doing what needs to be done without scaring people away.

We were invited to Santa Barbara, California, to drive the new RX lineup, and here’s a breakdown of the what we experienced.

The new RX lineup isn’t all hybrid (boo!), but the non-hybrid version is the base engine. If you want better performance or fuel economy, you want the hybrid. The 350h is the volume hybrid in the lineup, and will likely be where most customers gravitate.

The new RX sits on the Lexus GA-K platform, which weighs 198 pounds lighter than the outgoing model. Less weight means more performance. The AWD-only 350h has a 2.5-liter 4-cylinder engine making 246 hp and 233 lb-ft of torque.

This power is sent to all four wheels via a CVT transmission. The rear axle is electric only, like on the previous hybrid models, but new hardware is used to handle the increased performance.

Performance is fine. Lexus doesn’t claim a 0-60 mph on the 350h, but we’d guess it’s somewhere in the 6-7 second range. Truth be told that’s plenty of power and performance for everyday driving, especially when you consider how much everyday driving these days is sitting in traffic.

The new technology on board the RX is what shines. There is finally a new Lexus infotainment system that comes out of the Toyota and Lexus development center in Plano. While it is based on Android Automotive (though Lexus doesn’t like to talk about that), it has some changes that Lexus believes that its customers are going to want specifically.

Anything is better than the remote touch system that was on previous Lexus models, and the new system supports wireless Android Auto and Apple Car Play. There’s even a “Hey, Lexus” voice assistant that incorporates Google search results along with system controls. You can ask it basic questions like, “What is the capacity of Ohio Stadium?” Or, you can ask it some inappropriate questions that it’ll also answer. It’s great for road trips if you’re arguing with your passenger about something and you need it settled.

It’s not the best implementation we’ve experienced, though. The system can be a tiny bit laggy on certain things, and it’s confusing as to why there’s no physical button to change the car’s drive modes. But each time we use the system in a new Lexus or Toyota product, it does appear to be a little bit better. Hopefully that trend of kaizen for infotainment continues.

It’s refreshing climbing into an RX compared to some competitors. Everything is assembled properly, even on this preproduction model, and it’s clear that Lexus cares about the fit and finish of its vehicles.

Some models have a full color heads up display, showing valuable information about what the driver’s assist system is doing. And with Lexus Safety System 3.0+, the car will even perform automatic lane changes when requested.

The only user interface issue that is truly a bit confusing is the touch sensitive buttons on the steering wheel. Hovering a finger over one of the buttons will show you on the HUD what pressing the button does, but it’s not clear if everything requires a button push or a slide of the finger. Yes, you’ll get used to it. No, we still don’t like it.

Driving the new RX is uneventful. Which, honestly, is what you want out of a luxury car. The engine and transmission is a little louder than we’d care for from such a premium automobile, but it’s not jarring. CVTs are efficient, they just don’t feel premium to us.

In the interest of full disclosure, we did drive one RX 350h that didn’t feel Lexus-like at all. Being preproduction models, that can sometimes happen, but we made sure to sample a different vehicle to make sure it was a preproduction issue and not something that is just different for the new car. We were pleasantly relived to drive a 350h that felt much more like it should, and that’s the car we’re basing our opinion off of.

The seats are supportive. The new platform allows for more space in the entire cabin. New safety tech impresses. New infotainment tech isn’t maddening. It even looks pretty handsome, apart from the overhang on the top of the hood and front grille.

It’s everything the Lexus RX needs to be. 33-percent of RX buyers are repeat RX buyers, and they’ll feel right at home in the new model.

Potential conquests will be drawn to the ride quality, expected fuel economy, and Lexus reliability.

Let’s say you want more performance from your hybrid RX. Lexus, for 2023, is offering the 500h F Sport Performance model. Standard all-wheel drive meets standard performance goodies to be the most powerful and best performing RX to date.

A traditional 6-speed automatic transmission helps control the 367 horsepower and 406 lb-ft of torque from a turbocharged 2.4-liter gasoline and hybrid powertrain.

Adaptive dampers are standard, and are adjusted based on drive mode. Additionally, standard rear-wheel steering can turn the rear wheels up to 4-degrees in either direction to assist with low speed cornering or high speed stability.

21-inch wheels fill out the wheel wells, and F Sport performance bits are placed throughout the cabin. Paddle shifters let the driver select what gear they’d like to be in.

It’s safe to say that the 500h is quicker than the rest. We’re also big fans of a traditional automatic transmission, even if it only has 6 gears while the rest of the industry has 8 or more.

It’s not as sporty as a LC 500, but it’ll hustle when it needs to. The transmission shifts reasonably quick, but there aren’t enough gears for manual mode. We constantly were trying to downshift in corners and the computer wouldn’t let us. With more gears we could’ve probably found a ratio we preferred better.

We honestly prefer the 500h even in normal mode just in everyday driving, because we like the extra power and the automatic transmission appeals to us more.

At a projected 26 mpg, the RX 500h is reasonably fuel efficient, too, especially for a crossover that can hit 60 mph in less than 6 seconds.

Sure, it’s the most expensive of the lineup, but it gives us a good look at the future of Lexus performance vehicles.

The 2023 Lexus RX is exactly what it needs to be, with just enough changes to keep it fresh and modern. The 500h, especially in the hero copper color, is quite bold. But the rest of the lineup plays it safe.

We’d like a little more crazy from Lexus, but for those who don’t like that idea, the Lexus will be a great addition to their garage.