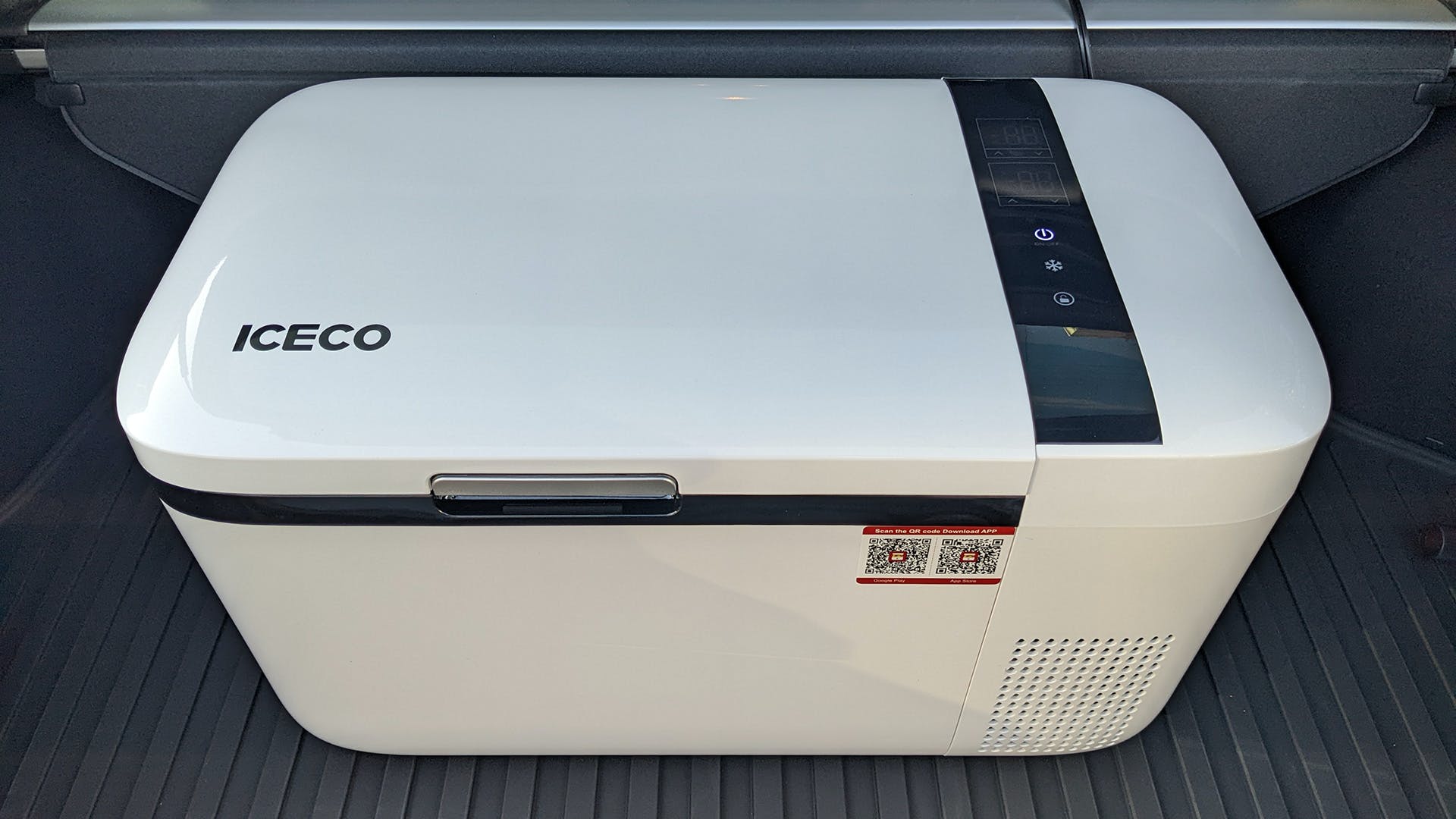 Car refrigerators have really grown in popularity over the last few years, arguably due to more EVs being on the road. With a standard gasoline-powered vehicle, 12-volt refrigerators or coolers can leave you with a dead battery unless you have your vehicle running the entire time. That’s not the case with EVs, especially those that have settings that keep your 12-volt outlet powered even if the car is off. But more importantly, the power use from a car refrigerator is mainly affecting your driving range and you don’t have to worry about your car’s battery being dead.

Many of our readers have been interested in car refrigerators for their EVs, since they can be used for multiple purposes. You can use one to keep your groceries chilled so you don’t have to rush home, and they’re a fantastic companion if you want to go camping with your EV. Or maybe you’re planning to go tailgating and want to keep some beverages cool. Whatever the reason, there are numerous car refrigerators to choose from and we recently got our hands on the ICECO GO20 to see how it performs. The ICECO GO20 is a 21-quart, dual-zone car refrigerator/freezer that has cooling ranges from 0°F to 50°F or -18°C to 10°C. It uses a compressor from Secop, a German company that specializes in manufacturing hermitic compressors for cooling circuits. The model is equipped with a fast cooling mode, which shifts all of the fridge’s cooling power to the left bin for the first 15 minutes, while the right bin will maintain its current temperature during that period of time. After 15 minutes, the GO20 will go back to its normal cooling mode so that the right bin can start cooling to its set temperature.

The fridge measures 22.4″ by 12.6″ by 12.4″ and weighs 25.6 pounds on its own. It’s not lightweight by any means, but pretty comparable to similarly-sized car refrigerators out there. Built-in handles make it easy to carry, and I found them comfortable to use and moving the GO20 around wasn’t cumbersome or tedious. It works with both DC and AC power, so you can use either your car’s 12-volt power outlet (cigarette lighter receptacle) or plug into your standard household outlet with the included adapter.

Out of the box, it is a dual-zone refrigerator, but the partition can be removed so it’s a single-zone fridge. I found the built-in LED light to be adequate for low-light use and the soft-closing door hinges is a nice design touch. It means you won’t accidentally pinch your fingers while closing the lid, which also makes it safe for children to use. Unfortunately you can’t lock the door on this fridge so it’s best not to leave it unattended.

The user interface on the fridge itself is relatively basic, allowing you to set the temperatures for the left and right bin, as well as turning on the fast cooling mode. Although there is a lock icon, that only locks the controls so the temperature settings aren’t accidentally changed. The fridge itself will lock the control interface if it doesn’t receive an input for 90 seconds. I did find changing the temperature on the unit itself to be a little clunky, as the touch controls weren’t as responsive as I would have liked.

The ICECO GO20 is also equipped with Bluetooth, which means you can download an app and control the fridge from your phone or tablet. We did evaluate the app’s functionality and will go more into details about that in our review. One of the main considerations we had in evaluating the ICECO GO20 was to see how quickly it cools, and how well it maintains that temperature. This is especially important if you’re primarily using a car refrigerator to store groceries, because it’s pretty pointless if you can get home before the fridge reaches any decent temperature. It also gives you an idea of how much time you need to spend pre-cooling the fridge before you load it up for a trip.

To test this, I set both the left and right bins to 0°F and enabled the fast cooling option. I set a timer on my phone for one minute, and recorded the temperature readings for the left bin and the right bin every minute, until both bins reached 0°F. You can see the results in the table below, and note that the fast cooling did turn off after 15 minutes.

I found the results to be a little peculiar. While the fast cooling function did do its job, dropping the left bin’s temperature from 81°F to 25°F in 15 minutes, the right bin (which is the larger of the two) actually hit the target 0°F sooner at 49 minutes. In fact, once fast cooling turned off, the left bin’s temperature actually increased all the way to 37°F at the 24-minute mark before steadily dropping again. It was also at that time that both bins were very close in temperature readings. And yes, both bins oddly dropped from 7°F to 0°F over the span of a minute.

Once both bins reached 0°F, I wanted to test how well the left bin would maintain that temperature, and how long it would take the right bin to reach 32°F. You can see the minute-by-minute results for that test in the table below.

As you can tell, the ICECO GO20 did a fantastic job maintaining 0°F in the left bin, while the right bin steadily increased its temperature until it reached 32°F. Coincidentally, it also took 55 minutes to reach 32°F, the same time it took both bins to reach 0°F from our starting temperatures of 81°F (left) and 78°F (right). The big takeaway here is that you really need to determine the temperatures you want for each zone, as it could take a while for one zone to warm up or cool down. If you decide to purchase the ICECO GO20 and want to use the app, it’s best to scan the QR code on the fridge to find it. The app, at least on the Google Play Store, is simply called “car fridge” and has a not-so-impressive 1.6-star rating. It was the top result when I searched “iceco go20” in the Google Play Store, but it’s still confusing that the app itself is just called “car fridge”.

That being said, the app actually worked just fine on my device, a Pixel 7 Pro. Bluetooth was able to locate the GO20 and it allowed me to set the temperatures for each bin, as well as toggle on and off fast cooling and power to the fridge. It’s a pretty basic app that does the job it’s designed to do, but it’ll always be limited by Bluetooth range — which is about 30 feet. I would say it is more convenient and easier to setup your fridge by using the app instead of the controls on the fridge. But based on user reviews, your results may vary as the app does seem to be quite buggy for others. As you can tell from my testing, the ICECO GO20 is a very capable car refrigerator. The fast cooling feature works well and will get the fridge to a respectable cool temperature very quickly. More importantly, the GO20 does a fantastic job at maintaining the set temperature, even if it takes a while for it to reach 0°F, which may not be your particular use case. Hopefully the two tables will help you determine how long you’d have to wait for the fridge to be usable, and you can decide for yourself whether the GO20 meets your needs.

The fridge itself is well constructed and feels solid, with a premium yet subtle appearance. I personally liked the pearl white finish (also available in gray) and it seems very durable. The soft-closing lid works well, but I do wish the LED light was a bit brighter. It’s also worth noting that while the fast cooling feature was on, the fridge did make some noise that’s noticeable, but nothing annoyingly loud. Once fast cooling turned off, the fridge was eerily quiet, to the point that I wondered whether it had completely turned off. During my two 55-minute tests, the fridge would make noise every now and then for a short period of time. It’s quite similar to a household mini fridge in that respect.

Ultimately, I believe the price is justified if the ICECO GO20 continues to perform for years to come. I’ll be sure to update this review in a few months to note how it’s performing, and will be curious to see how it holds up after a couple years of use. I do believe it does all the important things well, which is cooling down quickly and being able to maintain that set temperature.