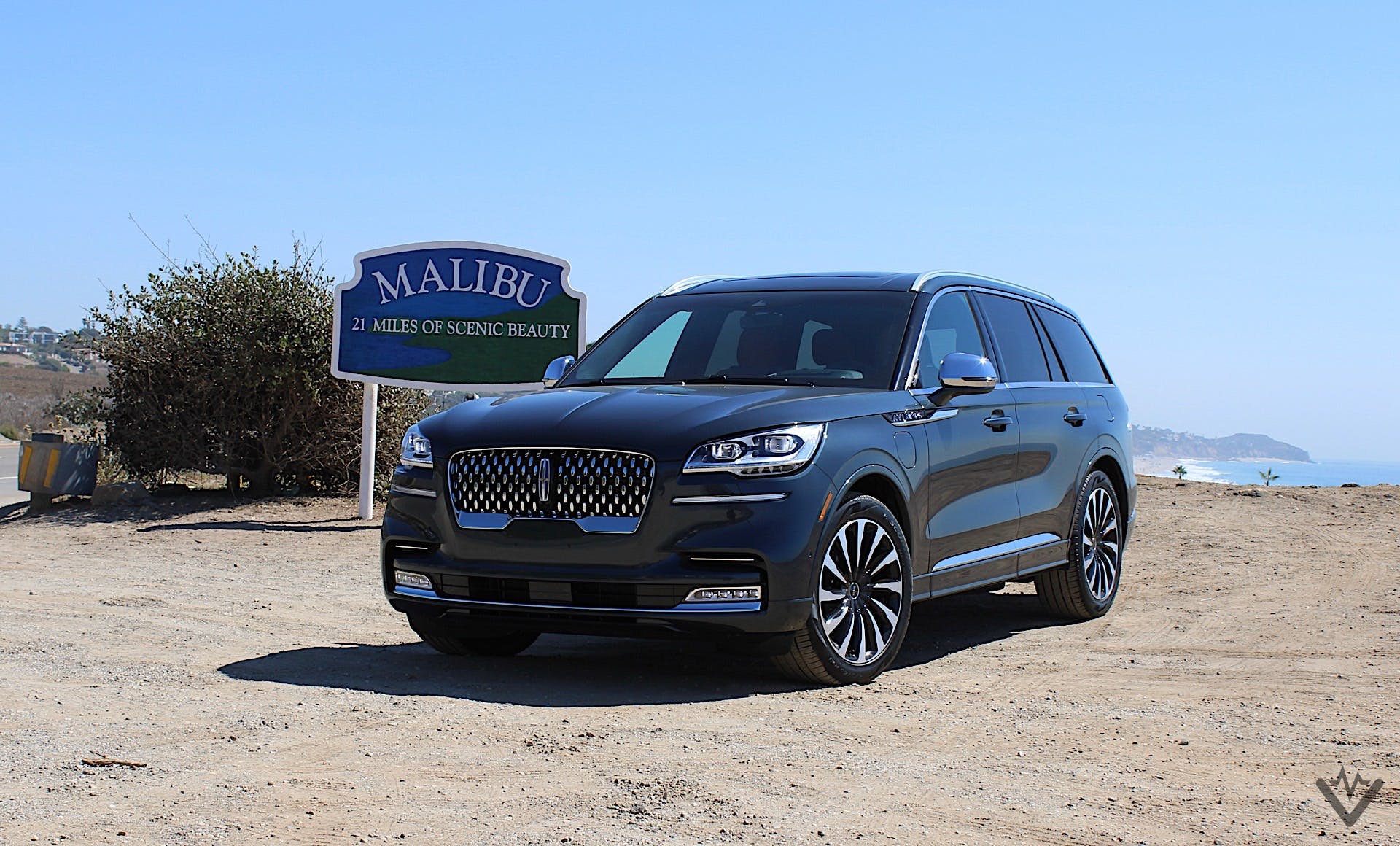 What’s your idea of luxury? Audacious and showy? Minimalistic and clean? Elegant and classy? Tech-focused? A blend of all of the above? Each brand in the premium segment lands in one or multiple categories to create their distinct identity. The 2021 Lincoln Aviator Grand Touring is a great example of this. You’ll never mistake it for anything but a purely American take on the mid-size three-row crossover. Only this time you get an electrified powertrain instead of a big V8. Will that enable the Aviator Grand Touring to stand out, though? Let’s find out.

The 2021 Lincoln Aviator Grand Touring packs a lot of style and flair despite its upright proportions. From its corporate grille to the softly curved headlight clusters and tasteful chrome accents, the Aviator exudes a sense of grandeur. LED taillights accentuate the crossover’s width and Lincoln spelled out on the tailgate adds to its presence. Unlike most crossovers of its size, the Aviator avoids looking like a box on wheels thanks to its roofline, which descends from the B-pillar and back.

That doesn’t hinder visibility because you still get an expansive glass area all around for excellent visibility. If you’re searching for hints of the Grand Touring model’s electrified nature, look hard because the only hints are blue Aviator badges on the front fenders and a blue Lincoln badge on the grille.

Stepping inside the Aviator Grand Touring’s interior is like entering a cool high-end lounge inspired by a jazz club. The aura is distinctly American from the colors to the design language. Patterned aluminum trim, leather, gloss black inlays, and two-tone upholstery create a modern yet flamboyant look. Together with the excellent build quality, attention to detail, and an incredibly quiet cabin, you get a truly luxurious experience. Pleasing chimes composed by the Detroit Symphony Orchestra add to the Aviator’s uniqueness.

It’s best to think of the Aviator as a 5+2 or 4+2 depending on whether you get one with the optional second-row captain’s chairs or not. The driver and front passenger are pampered with the available heated, ventilated, and massaging 30-way power front seats. If you end up in the second row, you’ll still be comfortable and get plenty of functionality including heating and ventilation on certain trims. The third row is best used for quick trips to lunch because legroom is limited. Additionally, the cushions are mounted low, forcing you to sit with your knees high up.

With all seats up, there’s not much cargo capacity even when you include the underfloor storage. Keep the third row folded so you can easily haul a lot of gear or bulky items. Dropping the second and third rows yield an expansive space with minimal intrusions. There are lots of cubbies to stow your small items including under the center stack, and a sizable center console bin. You also get a slot specifically for mobile devices complete with two USB ports (one A and C).

The Aviator comes with the Sync 3 interface featuring a 10.1-inch touch screen that’s responsive and easy to use. There aren’t many submenus and the icons are large, adding to its intuitiveness. However, certain climate and seat controls are in the main display instead of on the door panel or center console, which can take some time to get used to. Clean graphics give the infotainment system a modern look when paired with the available 12.3-inch digital gauge cluster and the head-up display.

Audiophiles will love the available 28-speaker Revel Ultima surround sound system, which is one of the best units in any vehicle today. Between its clarity and crispness, you get an epic listening experience especially when you put the Quantum Logic setting to its onstage mode. The result is a three-dimensional sound immersion that covers the cabin evenly while retaining a nice level of balance even at high volumes.

CoPilot 360’s components are subtle with their corrections and allow the car to follow traffic flow seamlessly in most situations. When adaptive cruise control is active, lane centering and steering assist help you complete gentle curves on the highway as long as the road has clear markings. It’s best to keep the distancing component in its middle setting because the nearest makes it follow the vehicle ahead too closely and sometimes results in sudden braking applications when traffic ahead slows down.

The best way to describe the Aviator Grand Touring is a powerful luxurious cruiser. Despite weighing 5,673 pounds, it accelerates with authority in an effortless yet calm manner. Between the 3.0-liter twin-turbo V6, electric motor, and quick-shifting 10-speed automatic, you have 494 hp and 630 lb-ft of torque under your right foot. Stomping on the accelerator gets you power right away, allowing the Aviator to get to speeds we won’t mention in no time. Passing and merging become a cinch while steep grades feel like they don’t exist even with the 13.6-kWh battery depleted.

Once cruising at a set speed, the Aviator loves to coast, turning off the gas engine and using only momentum and the electric motor to move. Unless you floor the accelerator, the gas engine won’t assist the electric motor. The powertrain, however, could engage more smoothly because there are instances that transitions to other operating modes are abrupt. Shifts from the transmission can be rough, too, especially at low speeds or when you ask for more power.

Further adding to the Aviator’s cruiser status is the softly sprung suspension. The passenger compartment is isolated from the outside world, especially with the available adaptive air suspension that uses navigation data and its front cameras to predict upcoming road conditions. Imperfections and uneven pavement, regardless of the type, disappear underneath the Aviator even when you put the crossover in its Excite (Sport) mode, which lowers it and stiffens the suspension. While body roll through turns and vertical motions are kept in check, front-end dive could be better managed because you get a noticeable amount during braking. At least the steering is accurate and weighted nicely, enabling the driver to get a sense of the Aviator’s size and allowing you to maneuver it confidently through narrow roads and tight urban areas.

Brake operation is mostly uneventful but you’ll need to push further down to switch from regenerative to mechanical braking. While this doesn’t result in any abruptness, you’ll need to press the pedal further than you’re used to, especially during emergency stops. There’s not enough recuperation to bring the Aviator down to a full stop or city speeds meaning you need to use the brake pedal more than other plug-in hybrids.

Charging the Aviator Grand Touring’s 13.6-kWh battery takes just over three hours using a level 2 AC charger or 240-volt outlet. A conventional 120-volt household outlet increases the charging time to just over six hours. With a full charge, the Aviator can travel up to 21 miles in EV mode according to the EPA. During our week with the vehicle, we consistently got 25 miles or more before the gas engine activated.

Luxury goes beyond nice materials, especially at price points above $50,000. A vehicle must have an identity and character to successfully make a statement and distinguish itself from the rest of the crowd. The 2021 Lincoln Aviator Grand Touring does exactly that. It embraces its American roots by paying homage to its predecessors through interior design and focusing on comfort while providing enough confidence to not end up driving like it’s wallowing down the road. Bringing these elements together and combining them with an electrified powertrain adds the modern touch to a classic luxury formula.

Yes, the Aviator has room for additional refinement but the categories it does well in are executed masterfully. This is what electrified American luxury looks like and no one’s mistaking it for anything else.