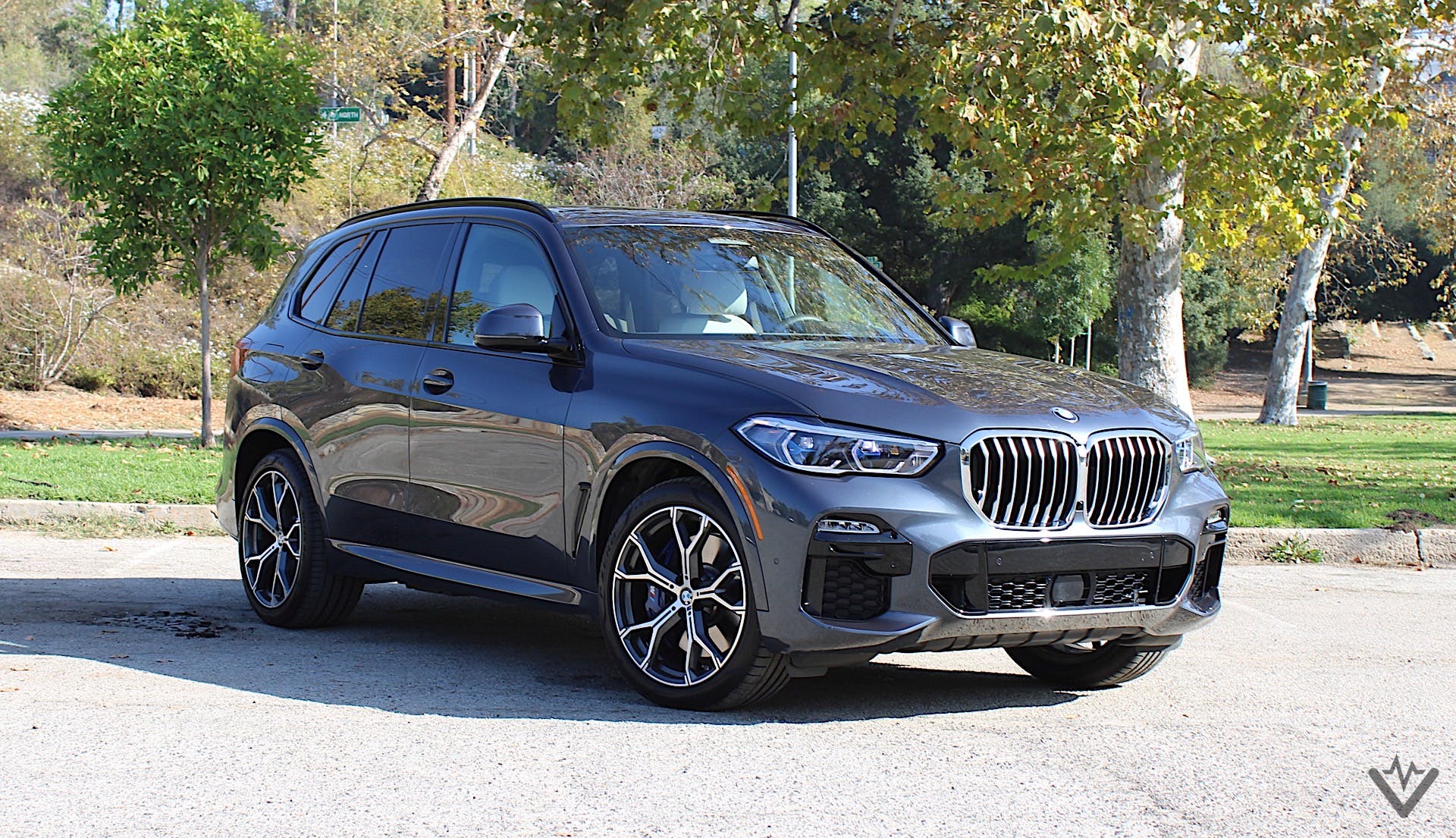 In the mid-size luxury crossover segment, electrification has become commonplace. For a while, your only choice was the Lexus RX but as more automakers move toward battery-electric vehicles, hybrids are emerging as the bridge technology. The 2021 BMW X5 xDrive45e is the latest iteration of the pioneering crossover’s plug-in hybrid flavor. It’s packed with what’s made this model so popular and promises more power, better efficiency, and a longer all-electric driving range.

BMW’s design language remains evolutionary for most of its vehicles. The X5 is no exception; you can see the family resemblance between the current model and its predecessors. Its upright proportions and expansive greenhouse provide great visibility. BMW changed the shape of the headlights and taillights just enough to keep the current car distinct from the previous three generations. As with most modern BMWs, the massive kidney grille dominates the front fascia. Thankfully, it’s not overly large like in the 7 Series, X7, and 4 Series. The only hints of the 2021 BMW X5 xDrive45e’s electrified nature are the charging port on the driver’s side front fender and the xDrive45e badge on the tailgate.

The X5 xDrive45e handily accommodates five people — even tall ones — and their gear. No one will be fighting for foot room in the back thanks to the flat floor. Although you lose the underfloor space, the plug-in hybrid X5’s cargo capacity is still usable. There’s a lot of vertical space and dropping the 40/20/40 split-folding rear seat backs gives you a squared-off area for bulky items. In addition to its flexibility, the X5 has generous small-item storage thanks to the massive front cubby, big door pockets, a sizable center console bin, and a deep glovebox. The plug-in X5, however, isn’t available with a third row because the battery takes up the area where it would go.

The X5’s cabin sports impeccable fit and finish. There are no signs of chintzy materials; everything you touch and operate exudes a sense of luxury. The available crystal controls, which are part of the Executive package, adds character to the otherwise austere interior. Multicolor ambient lighting that extends into the panoramic sunroof spices things up further and adds a sense of occasion at night. Together with the vault-like quietness, the X5’s cabin feels like a proper luxury space.

BMW’s available multi-contour seats are a must-have option on the X5. The level of adjustability is so extensive there’s no way you’ll find an uncomfortable position. Additionally, the cushioning strikes the perfect balance of firmness and plushiness. They hold you well in place during spirited drives and will have you feeling refreshed after a long drive.

The X5 uses the iDrive 7.0 interface, featuring two 12.3-inch displays that are clear and crisp. The responsive main touch screen has a simple, straightforward layout and you can also control it via the knob and shortcuts on the center console or the left side of the main display. Everything on the dash is within easy reach since the center stack is tilted toward the driver. The available Harman Kardon surround sound system offers a great listening experience. It’s immersive, sharp, and easy to customize, making it a cinch to personalize everything to your liking.

Every X5 gets a generous list of collision prevention and driver assistance features as standard equipment. The Driver Assistance pro package expands on that by adding adaptive cruise control, evasion assist, lane centering, traffic jam assist, and steering assist. In most situations, the suite works well and doesn’t act like an overprotective nanny. Corrections from lane-keeping and steering assists are gentle and don’t jerk you around. However, the distancing component can be a little aggressive with its braking when traffic ahead slows. In the closest setting, the system slows the vehicle down late and tends to input too much stopping power. It’s best to keep it in the middle level to prevent it from braking too aggressively.

One of the stars in the X5 xDrive45e’s driving experience is the plug-in hybrid powertrain. It couples a turbocharged 3.0-liter inline-six with an electric motor, a 24-kWh battery, and an eight-speed automatic transmission. The total system output is 389 hp and 443 lb.-ft of torque. Between the lack of turbo lag and the electric motor’s instant torque, you get such effortless acceleration that you barely notice the crossover’s 5,672-pound curb weight. Quick, seamless shifts from the gearbox add to the powertrain’s buttery smooth operation.

The AWD system in the plug-in X5 is a mechanical setup meaning a drive shaft connects both the front and rear axles. Its rear-biased nature is most evident in Sport mode and when driving in a spirited manner. The rear end rotates willingly, enabling the vehicle to stay neutral.

According to the EPA, the X5 xDrive45e can travel up to 31 miles in all-electric mode. We achieved that even with some freeway driving. When kept in the city, we easily went 40 miles or more before the gas engine kicked in. In Hybrid mode, the plug-in X5 is good for 400 miles with a full tank and fully charged battery or an EPA-rated 19/22/20 mpg city/highway/combined. The battery can be fully charged in four to five hours using a level 2 AC charger or overnight via a conventional household outlet.

The X5 remains one of the better handling crossovers in its segment and the plug-in hybrid version is no different. On a winding road, it drives like a sports sedan, carving through corners with a surprising level of poise for its size. Body motions are well controlled, allowing the X5 to exude confidence on the road. The available 21-inch alloy wheels wrapped in staggered Pirelli P Zero summer tires provide prodigious grip levels, giving the X5 a sense of solidity.

Thanks to the adaptive air suspension, the X5 is as cushy as it is agile. Even with the wider tires, larger wheels, the ride height dropped to its lowest setting, and the dampers set to Sport mode, this crossover glides over road imperfections and makes harsh impacts disappear underneath it. The X5 barely gets fazed going over big potholes, expansion joints, or ruts. You know you’ve gone over something but you won’t feel anything because the suspension does a fantastic job isolating the cabin.

Things get a little out of sync when you bring the X5’s steering into the equation. As with most recent BMWs, this crossover feels disconnected. Yes, the front wheels turn toward the intended direction but there’s no sense of connection. Putting the steering into Sport mode adds a little more heft but it still feels detached and video game-like.

As with most electrified vehicles from German manufacturers, the brake operation is more akin to a conventional internal combustion vehicle. The X5 provides good levels of regenerative braking when you ease off the accelerator but it’s not enough to bring you to a complete stop. Stepping on the brake pedal adds more recuperation to slow the vehicle down before transitioning to friction braking. You can tell the point where the handoffs happen but thankfully, they’re not abrupt and don’t cause you to get jolted when you have to make an emergency stop.

The 2021 BMW X5 xDrive45e starts at $66,395. Our Arctic Grey Metallic test car, which came with the M Sport, Executive, and Driver’s Assistance Pro packages plus several stand-alone options cost $81,695. The large battery qualifies the X5 xDrive45e for the full $7,500 federal tax credit along with local and state incentives.

Thanks to its winning formula, the BMW X5 remains a strong mid-size luxury crossover. Electrification only amplifies this because you now have power, efficiency, and space all in a single package. Yes, you sacrifice a few things to get the plug-in hybrid X5 but we think it’s worth the trade-offs. In fact, the 2021 BMW X5 xDrive45e is the best one in the lineup; it’s a well-rounded crossover that’s easy to love and a great companion on the daily commute or a long trip.