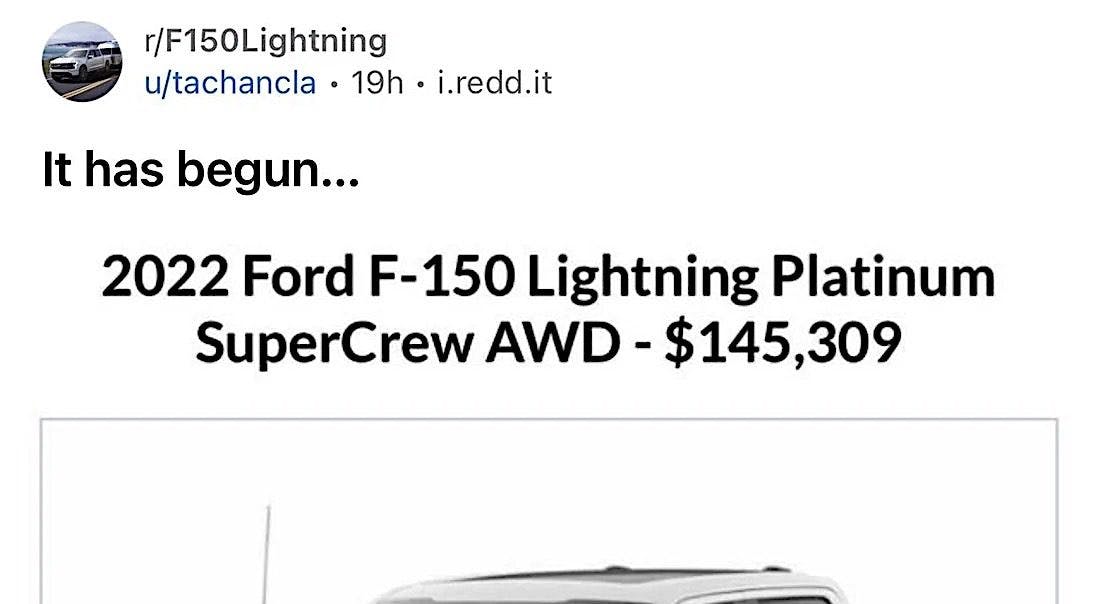 In the United States, prices quoted by the manufacturer are Manufacturer’s Suggested Retail Price. That “suggested” part is key, and how franchised dealerships can charge whatever they want for a new car, regardless of what the brand would like them to sell it at.

On a hot new product, especially one that has 200,000 preorders and a factory that can only build 150,000 a year, some dealerships will try to take advantage of the demand and offer vehicles up for ridiculous markups. They’ll claim that it’s free market capitalism — and it is — but you don’t need to pay it.

Here’s just one example of a profiteering dealership.

Don’t do it. Don’t pay the markup. The F-150 Lighting is a great truck, for sure, but you don’t need to be the first on the block to get one. It’ll still be a great truck in the coming weeks and months. Ford is working hard to ramp up production, and we wouldn’t be surprised if the company ends up being able to exceed the currently production capacity it has quite quickly.

Also be willing to shop around. If you can get a dealership to sell you a truck at sticker in Iowa, buy it in Iowa. It’ll cost less to ship the truck to wherever you live than to pay the markup. Heck, you could probably ship the Lightning to the literal moon for less money than that dealership wants to get for its new truck.

Ford’s CEO Jim Farley as said he and his company will crack down on these types of shenanigans. But some dealerships will push the limit. Don’t give them the satisfaction.

Casting a wide net is the best way to save money on your new Lightning, or really any new car right now in this market. Even if you have to pay to fly there to drive the car home, or pay a shipping company to ship it, it’ll still be cheaper than just giving in and paying the markup. Plus, you’ll have a good story to tell.