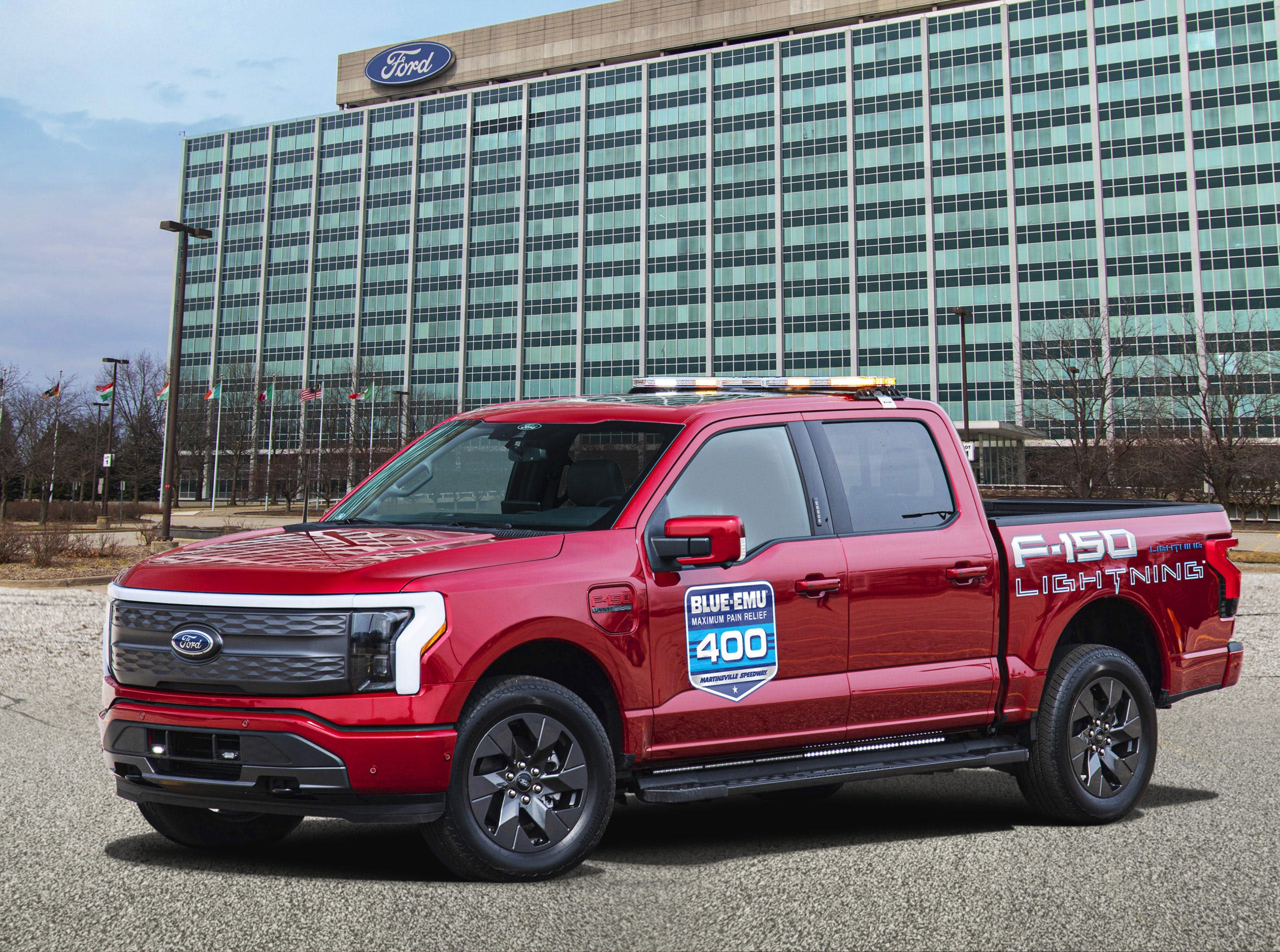 NASCAR’s next race at Martinsville Speedway in Ridgeway, Virginia will have a special guest service as a pace vehicle. The 2022 Ford F-150 Lightning will be on the track making its first appearance serving in the role for the NASCAR Cup Series on April 9. This isn’t the first time a battery-electric vehicle was chosen as a pace car by NASCAR. A Ford Mustang Mach-E served in the role last year at the Talladega Superspeedway. Ford first used a BEV as a pace car for NASCAR in April 2012 when a Focus Electric was served in the role.

The use of the 2022 Ford F-150 Lightning marks the second year in a row that the Blue Oval fielded a BEV for pace car duties. “Ford is fully invested in electrification and the response to Lightning has been so overwhelming that it was an easy decision to bring it to a NASCAR event,” said Jeannee Kirkaldy, Motorsports Marketing Manager of Ford Performance. “One thing we definitely know is that our fans love trucks and we’re confident that feeling will only grow when they see Lightning out on the track leading the field to green.”

Darren Palmer, Vice President of Ford electric vehicles programs, said that he believes the all-electric truck will turn heads at the race. Palmer added that he can’t wait to show how capable the F-150 Lightning is. The example that will be used features the extended range battery, giving it 563 hp and 775 lb-ft of torque, enabling it to hit 60 mph in the mid-4.0-second range. “I haven’t driven the Lightning yet, but if it’s anything like the Mustang Mach-E, it’s going to be a blast,” said NASCAR Cup Series driver Ryan Blaney. “I hope it ends up being the only thing in front of me once the race starts.”

In addition to the extended range battery, the F-150 Lightning is also available with a smaller standard range battery. While its torque rating remains the same, its horsepower goes down to 426. On a single charge, the standard range F-150 is good for 230 miles while the extended-range model can travel 300 to 320 miles depending on the trim. It will be available in crew cab configuration with a 5.5-foot bed and a dual-motor setup. The F-150 Lightning is also the first F-150 to get an independent rear suspension.

Martinsville Speedway is celebrating its 75th anniversary this year and it will host all three top NASCAR touring series races. The first will be the Camping World Truck Series on Thursday followed by the NASCAR Xfinity Series on Friday. Finally, the NASCAR Cup Series will take place on Saturday. That’s when the F-150 Lightning will hit the track and serve as a pace car for the event.

Prices for the 2022 Ford F-150 Lightning start at $41,669 for the work truck variant called the Lightning Pro. The most expensive version is the Platinum, which checks in at $92,569 thanks to a broad array of standard equipment including a long list of creature comforts and the extended range battery. You can get the larger battery pack as an option on the lower trims. However, it’s only available for fleet vehicles on the Lightning Pro.