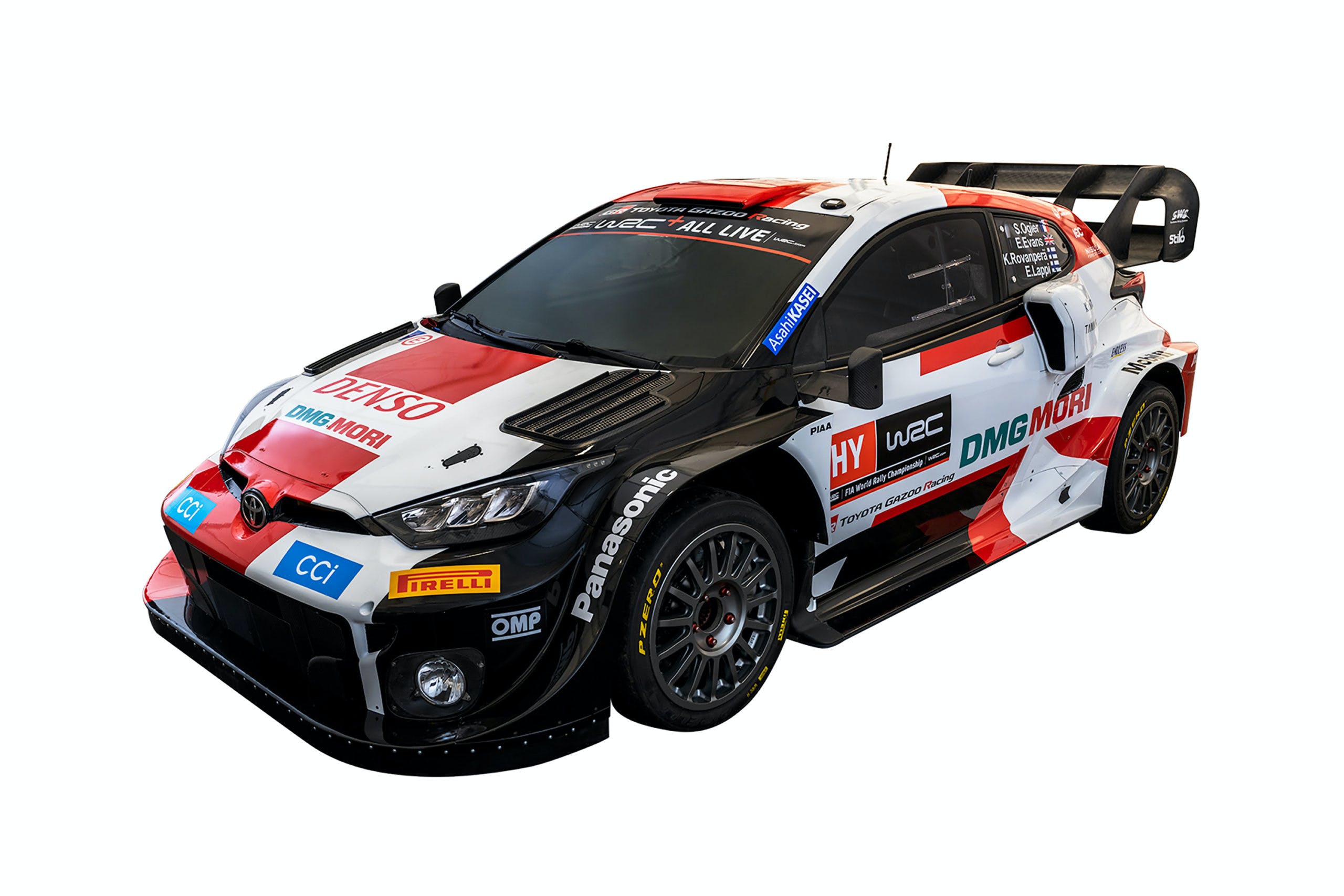 The World Rally Championship is about to get into full swing and more automakers participating this year are showing their entries. Based on the production GR Yaris, the Toyota GR Yaris Rally1 succeeds the outgoing Yaris WRC, which did a clean sweep of the manufacturer’s, drivers, and co-drivers titles in the 2021 season. It will debut at the 2022 Rallye Monte-Carlo, which happens from Jan. 20 to 23.

With the change in regulations, all Rally1 entrants to the WRC must use a hybrid powertrain. In the Toyota GR Yaris Rally1, that couples a turbocharged 1.6-liter engine with an electric motor and a 3.9-kWh battery, resulting in a combined output of over 500 hp. The internal combustion engine will also run on sustainable fuel, the first time it’s been used in an FIA World Championship series.

The GR Yaris Rally1 is built around a special spaceframe chassis for improved occupant safety. Other changes required by the new regulations include less complex aerodynamic components, the removal of the active center differential, and the return of the mechanical shifter. These updates are meant to put the focus on a driver’s skill and ability to strategically use the hybrid powertrain’s regenerative capabilities at each stage. This also allows them to work with engineers to optimize the vehicle’s performance and drivability within the new set of rules.

Over the last few weeks, the GR Yaris Rally1 has been put through an intense testing program. The particular focus is to hone in and ensure that the car can meet the demands of the Rally Monte-Carlo, an event famous for changing conditions. Surfaces will vary from dry asphalt to snow and ice, which could prove to be a challenging start for drivers still getting to know their new cars.

Behind the wheel of the GR Yaris Rally1 at the start of the event will be the current champion, Sébastien Ogier. In addition to being an eight-time world champion, Ogier also won the Rallye Monte-Carlo eight times. His co-driver this year will be Benjamin Veillas. Both will be on a partial schedule this season. Leading Toyota Gazoo Racing’s WRC efforts will be Elfyn Evans and his co-driver, Scott Martin who placed second at last year’s event. Alongside them will be Kalle Rovanperä and his co-driver Jonne Halttunen.

In total, Toyota Gazoo Racing will have four vehicles in contention, meaning there’s at least one team in every round. Takamoto Katsuta and Aaron Johnston will compete in all stages under a newly created team called Toyota Gazoo Racing World Rally Team Next Generation. The crews start their three-day reconnaissance of the stages set this year with 85 percent of them being new versus last year. Service parks have been moved into Monaco from the commune of Gap.

The morning of Jan. 20 will see teams do shakedowns before the rally begins that evening at the Casino Square ahead of the opening of two night stages. One of them includes the Col de Turini, which hasn’t been used in the dark since 2013. Three stages will open on Jan. 21 that will be run twice with only a tire change zone in Puget-Théniers. On Jan. 22, three more stages open with a similar format as Friday and will have a tire change zone in Digne-les-Bains. Jan. 23 is the final day of the rally and will have two stages that will be run twice, the one finishing in Entrevaux is the only one identical to the previous season. Toyota will be competing with several automakers this year including Hyundai, which entered the i20 N Hybrid WRC. Other brands in participation include Seat, Ford, and Citroën.