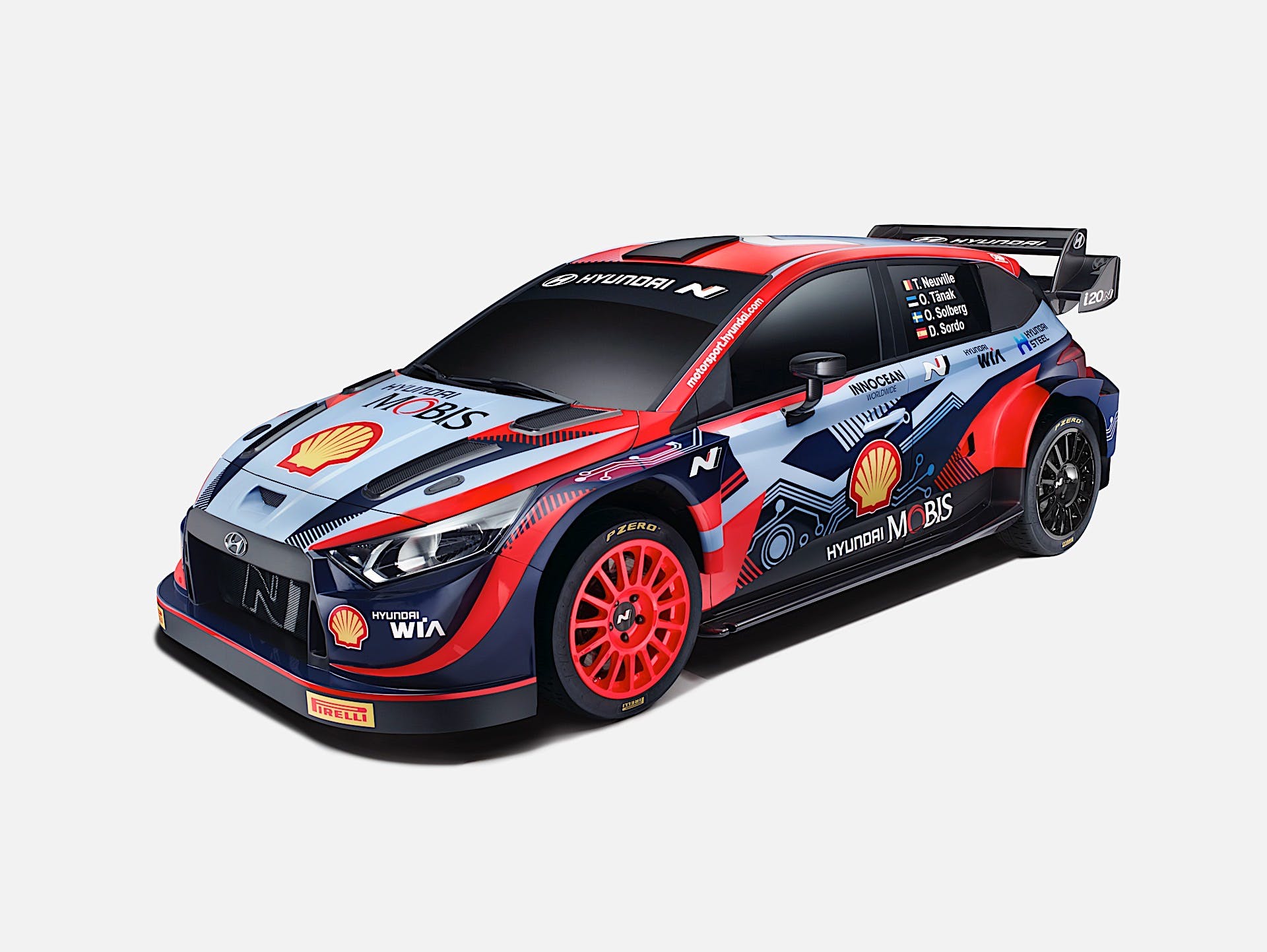 Hyundai has been on a motor sport roll lately. In addition to competing in the TCR class with the Veloster N, i30 N, and Elantra N, the company is also in the World Rally Championship. Today, its latest rally car has debuted and it’s been electrified to comply with the latest WRC regulations. The Hyundai i20 N Hybrid WRC is based on the production i20 N hot hatch and features a new plug-in hybrid powertrain that couples a 1.6-liter turbo-four with an electric motor and a battery. Although no power output was disclosed, we suspect the i20 Hybrid WRC has over 500 hp just like its rivals from Toyota, Ford, Seat, and Citroën.

The Hyundai i20 N Hybrid WRC will make its official debut alongside its electrified rivals in Monte Carlo, the first event where the new rules take into effect. Hyundai was a two-time manufacturer’s champion and highlights its commitment to motor sport. Basing the rally car on the i20 N shows the link between the road cars consumers can buy and the vehicles used for competition. Additionally, Hyundai is also putting into focus the importance of racing to improve its production vehicles as it pushes for more titles in 2022.

In addition to the usual cues like massive front splitters, widened wheel wells, an extended rear bumper, and a large rear wing, the i20 N Hybrid WRC has a reinforced body that includes a roll cage. The car also features techy-looking exterior graphics that signify its electrified nature. These are similar to the ones found on the 800-hp RM20e prototype that Hyundai’s N division uses as a technology test bed to develop its future propulsion systems.

“We are excited to be part of this new hybrid era of WRC and to demonstrate Hyundai’s firm commitment to international motor sport. WRC is about putting the most technically advanced cars, driven and navigated by the best crews, on the world’s toughest stages: the 2022 season is set to take things to the next level,” said Scott Noh, President of Hyundai Motorsport. “Furthermore, from a corporate perspective, it is important for Hyundai to be associated with road-relevant technology; the WRC move to hybrid brings together the brand’s motor sport and road car activities. We are confident we have the package to fight for our third manufacturers’ title — and to support our crews to be in the hunt for the drivers’/co-drivers’ titles too.”

Behind the wheel of the i20 N Hybrid WRC cars will be the teams of Thierry Neuville and Martijn Wydaeghe and Ott Tänak and Martin Järveoja. Neuville is aiming to add more WRC wins for 2022, which currently stands at 15 as he enters his ninth year with Hyundai Motorsport. In his first season with Wydaeghe as his co-driver, Neuville secured two wins and seven podium finishes. In the 2020 and 2021 seasons, Ott Tänak and Martin Järeoja took two wins and eight finishes on the podium driving under Hyundai Motorsport. A third entry will be piloted by newcomer Oliver Solberg and his co-driver, Elliott Edmondson. The final pair in Hyundai Motorsport’s lineup is Dani Sordo and Cándido Carrera, the former of which is in his ninth season with the team.

For this season, the team will compete in 13 rounds, covering the WRC’s usual mix of terrain, which includes gravel, tarmac, snow, and ice. In addition to the existing stages, Rally New Zealand and Rally Japan are finally expected to make their debut as part of the lineup after a delay of two years. Hyundai has been testing the i20 N Hybrid WRC in Europe since last May on different surface types. Alongside the electrified powertrains, the fuels powering the internal combustion component are 100 percent sustainable.

Hyundai Motor Group has committed to carbon neutrality by 2045 and as a result of that, it has doubled down on electrified powertrains. All three brands under the company umbrella have revealed plans to transition strictly to battery-electric vehicles. All of them have a variety of vehicles ranging from family crossovers to sedans and performance models, all of which will benefit from the knowledge gained from the competition.

Written by Stefan Ogbac
Follow Author
RELATED ARTICLES
1957 Chevrolet Project X morphs into an EV
Audi RS Q e-tron to enter the 2022 Dakar Rally
2022 Hyundai Kona Electric gets a new look and more tech
Should you get a screen protector for your Tesla Model 3?
RELATED ARTICLES
JOIN THE EV PULSE NEWSLETTER
Receive weekly updates on each of our electrifying articles.