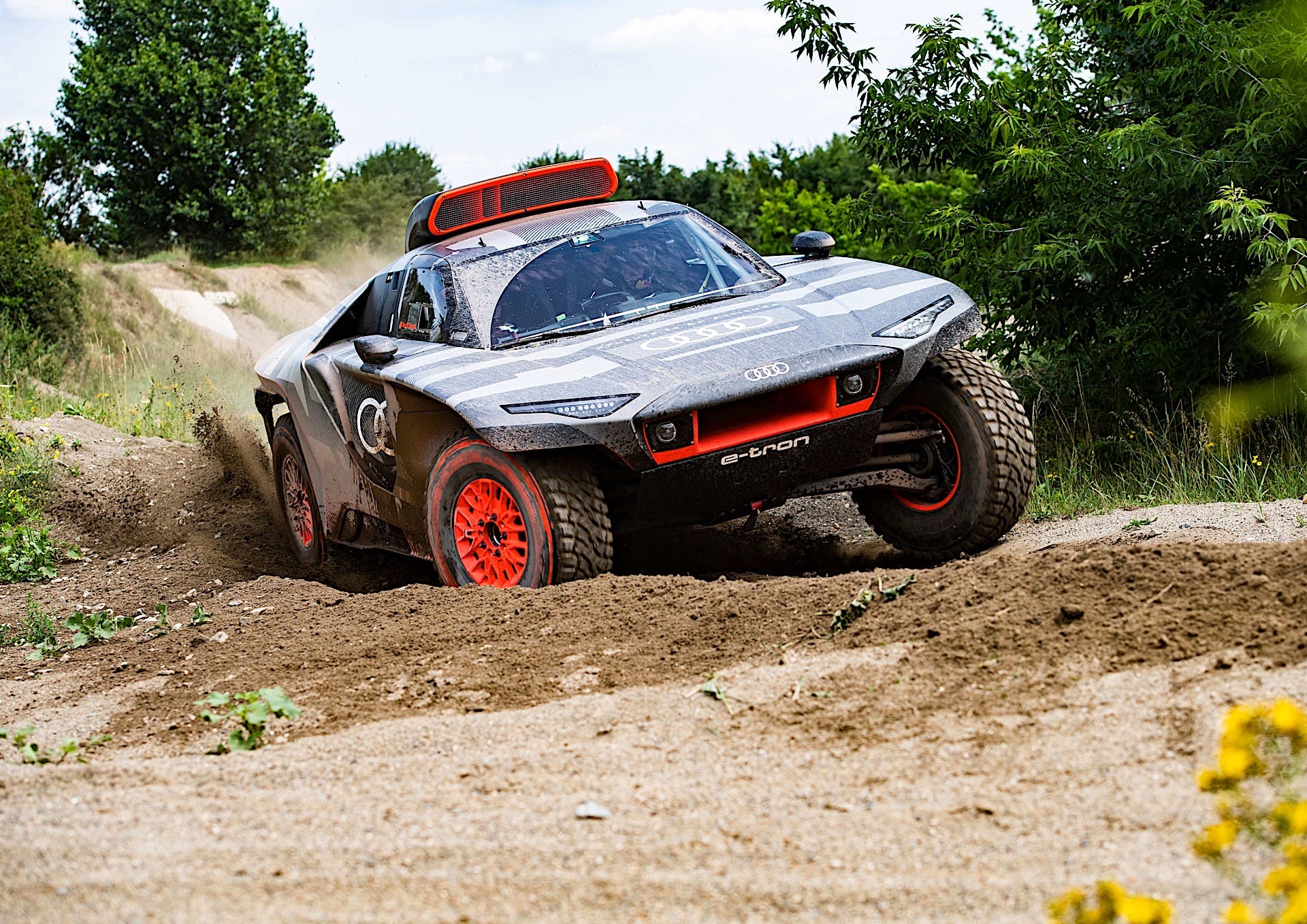 The Audi RS Q e-tron has been revealed and it’s undergoing testing ahead of entering the 2022 Dakar Rally. This prototype dirt racer will put Audi’s electrified powertrains to the test in one of the most grueling motor sport events. In total, the Dakar Rally lasts two weeks and will have daily stages that cover up to 800 km or 497 miles. Andreas Roos, manager of the Dakar project at Audi Sport says that this is the ultimate challenge for an electric drivetrain. “What we are trying to do has never been done before,” he added.

Since there aren’t any places to charge in the desert, Audi has opted for a series hybrid setup for the RS Q e-tron. The engine is a turbocharged gasoline unit taken from a DTM race car and will keep the battery charged while on the move. It will operate between 4,500 to 6,000 rpm to keep it at its most efficient range and keep consumption down. Two electric drive motors, one on each axle, will motivate the Audi RS Q e-tron. A third electric motor serves as part of the energy converter for recharging the 50-kWh battery while driving. Brake energy regeneration will add additional energy recuperation when slowing down to keep the battery charged.

Audi co-developed the RS Q e-tron’s battery with one of its partners, according to Stefan Dreyer, Head of Development at Audi Sport for motor sport projects. He added that they have already achieved 97 percent system efficiency thanks to their involvement in Formula E. Dreyer notes that battery and energy management is where the greatest development potential lies in electrified mobility. “What we learn from the extremely challenging Dakar project will flow into future production models,” said Dreyer. “As always, we are also working closely with our colleagues from road car development on this project.”

The RS Q e-tron’s powertrain makes a combined output of 500 kW or 670 hp. However, it hasn’t been finalized how much of that will be usable during the Dakar Rally because that decision will be made by the event’s organizers. Like most electrified vehicles using only electric motors for motivation, the RS Q e-tron doesn’t have a mechanical connection between the front and rear axles. Instead, torque distribution between each axle is achieved via software, saving weight and space.

Audi designers made sure to make the RS Q e-tron look futuristic to distinguish it from other Dakar prototype race cars using only internal combustion. It features many cues that link it to the road-going e-tron models like the thin LED headlights and a rear that sweeps down quickly, giving it a spaceship-like appearance. The vehicle will be run in cooperation with Q Motorsport. Team principal Sven Quandt says that in addition to reliability, one of the biggest challenges will be managing the electrified powertrain’s different systems and making sure they communicate with each other. Audi rolled out the RS Q e-tron in Neuburg, Germany at the beginning of July. It already has an intensive test program and has been entered into several cross-country rallies starting now until the end of 2021.

The Audi RS Q e-tron project started less than twelve months ago and has been challenging according to Roos. “We had to begin the development while the regulations for alternatively-powered vehicles had not even been finalized yet.” Doing it all during the height of the COVID-19 pandemic made it even tougher. In the end, Roos noted that the prototype’s rollout became a special moment because they’d achieved so much in such tough circumstances. Look for the RS Q e-tron to compete at next year’s Dakar Rally where Audi is aiming to be the first to win the event with an electrified powertrain.