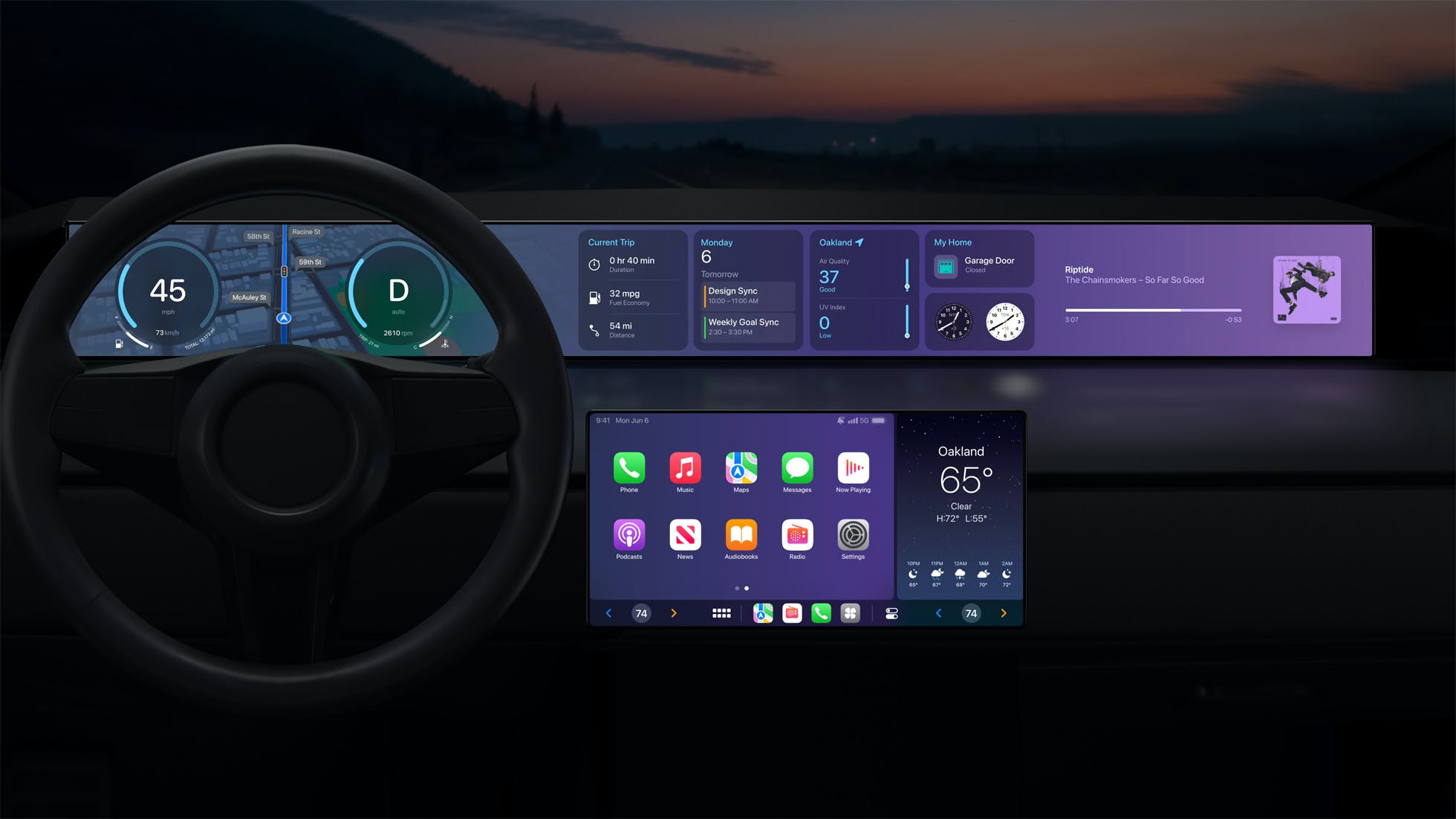 Apple announced the newest version of CarPlay at the 2022 Worldwide Developer’s Conference (WWDC). This latest version integrates with your vehicle further and goes beyond mirroring your smartphone. In addition to usual media and navigation apps, Apple is expanding CarPlay’s capability by letting it take over all infotainment functions. That means everything from maps to the trip computer and the gauge cluster can all be taken over by CarPlay.

CarPlay will be able to take over multiple screens within the vehicle and create a more unified look. You’ll be able to do things like changing the climate settings, controlling the radio, and showing your speed, fuel/charge levels, and other essential information. The latter is achieved by accessing vehicle data and rendering it into CarPlay. Additional personalization features include the ability to change your gauges on the digital cluster and support for widgets, allowing you to add things like weather and music right on your Home Screen.

Apple Maps is gaining multi-stop routing, allowing you to input up to 15 stops you can add via an iPhone or Mac computer. Another new addition is a transit update so commuters can see how much their trips will cost, add a transit card to their Wallet, replenish transit cards, and see low balances all within the Maps app. Family Sharing will also be added, allowing parents to control what their children watch. It includes age-appropriate suggestions for movies, books, and other forms of entertainment and can allow parents to approve or decline their child’s request for more screen time.

Since its introduction, Apple CarPlay has become a mainstay in vehicles of all types. It provides additional convenience and removes the necessity of adding built-in navigation systems thanks to features like Apple Maps, Waze, and Google Maps providing convenient access to navigation. You also get access to media apps like Apple Music, YouTube Music, and Spotify, which means you don’t need to use Bluetooth and take your eyes off the road when you switch playlists, artists, or albums. Having Siri on board also simplifies tasks such as sending text messages and making calls.

Although most vehicles require you to connect to a USB or USB-C port to enable Apple CarPlay, some now offer wireless capability. That provides additional convenience since you can simply put your phone on a wireless charging pad and do away with wires. The next generation of CarPlay looks like a full integration into the car but it’s not embedded into it like Google’s Android Automotive OS. Instead, you still need to connect your device to the vehicle for it to take over infotainment duties.

Android Automotive OS is the car’s native interface and to date, Volvo, Polestar, and Renault are the ones using it. Renault has a unique skin on it complete with Apple CarPlay compatibility. Later in the decade, Ford and Lincoln will move to Android Automotive OS. Polestar will add Apple CarPlay later this month via an over-the-air (OTA) update. Nissan and Mitsubishi will follow Renault’s lead and move to Android OS in future vehicles. Like their French partner, expect it to have unique skin and include Apple CarPlay integration to keep their respective interfaces agnostic.