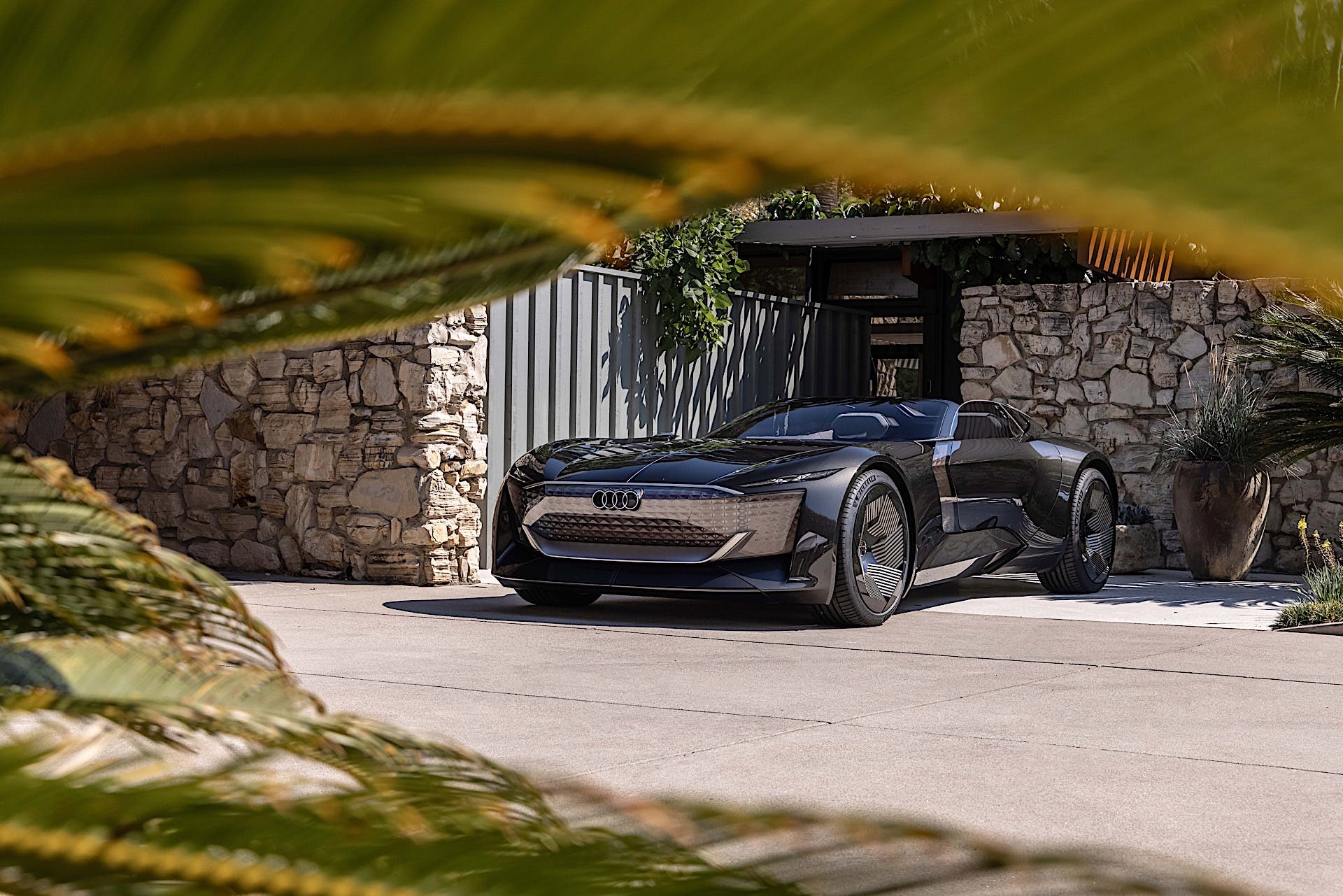 Audi has revealed the skysphere concept, an all-electric convertible that can extend its wheelbase. This is the first in a family of concept cars from Audi and one of its highlights will be its interior, which will show off a new interactive space approach made possible by autonomous technology. The skysphere Concept will also show off two different driving experiences, one of a GT car and the other of a sports car.

Inspiration for the Audi skysphere concept’s design came from the Horch 853 convertible. However, the skysphere is incredibly low to the ground and looks futuristic. You still see Audi’s corporate look but there’s no grille; instead, you get a three-dimensional Singleframe design with an illuminated four-ringed logo. The lights are used as design elements with rhythmic pulses and sequences, which come into focus when you change its wheelbase. When you go to Sport mode, the LED lighting signature also changes to let you know that it’s now in its sportiest setup. The rear end gets digitally controlled LED surfaces that run across the width of the vehicle. Rocker panels that protrude into the wheel arches is necessary because it slides back under the doors. As a result, the skysphere Concept can be as long as an A8 L or as compact as a RS 5.

The variable wheelbase is central to the skysphere Concept because it is key to the car’s two personalities. In the grand touring experience, the car extends into a 17.0-foot vehicle to maximize legroom and interior space. This also enables autonomous driving, allowing the car to chauffeur you and your passenger while you enjoy the scenery, Sport mode shrinks the car to 16.2 feet and deploys the steering wheel and pedals to allow you to take control. The skysphere Concept also has rear-wheel steering to maintain agile handling and a full suite of driver assistance features outside of autonomous driving mode.

Powering the skysphere Concept is an electric motor mounted on the rear axle and rated at 623 hp and 553 lb-ft of torque. Audi says the car weighs around 1,800 kg or 3,968 pounds, allowing it to hit 100 km/h (62 mph) in around 4.0 seconds. The battery pack has over 80 kWh of capacity and can travel over 500 km or 310 miles on the WLTP cycle. Audi’s adaptive air suspension features aluminum control arms on all four corners and features three independent air chambers for maximum comfort in its base mode. It can also lower the vehicle by 10 mm to maximize aerodynamics. The car can also independently raise or drop each wheel to compensate for uneven surfaces and road undulations. Audi also added a steer-by-wire system that can be adjusted for maximum comfort or directness depending on the driver’s needs.

The three members of Audi’s “sphere” concept car family will focus on the passenger’s interior surroundings. In the skysphere, the passenger gets a different experience because the fully digital gauge cluster lets them stay connected with the world around them. All three “sphere” concepts are designed with level 4 autonomous driving in mind, meaning the pedals and steering wheel can swivel out of the way giving occupants more space to enjoy the scenery of their route and stay connected.

Audi says the seats emphasize comfort without sacrificing their functionality in driving mode. They are also upholstered in sustainable materials including microfiber fabric and offer variable positioning to maximize legroom and give you the ability to move around more. Sustainability-sourced eucalyptus wood and synthetic materials complete the interior while still offering high levels of luxury. In Sport mode, the interior transforms into a driver-centric layout and stows all the large displays. The major controls can be adjusted based on their preferences while most functions are found mainly on the steering wheel.

In grand touring mode, a massive 55.7-inch-wide display that’s also 7.0-inches tall emerges on the dashboard. It houses all the vehicle and infotainment settings and can be used to access the internet, make video conferences, and stream movies while in autonomous mode. A high-end sound system that Audi says “delivers concert hall audio quality” even when on the move rounds out the interior. Its speakers are hidden behind the door panels and rear interior wall to create a surround sound effect and give it noise-canceling capability.

The Audi skysphere concept is the first of three show cars that will preview the brand’s future vision of luxury. Together with the upcoming grandsphere, and the urbansphere concepts due out by 2022, Audi is aiming to make a vehicle that goes beyond transportation. It plans to re-imagine the interior into a space that does more than just serve as your ride from A to B.