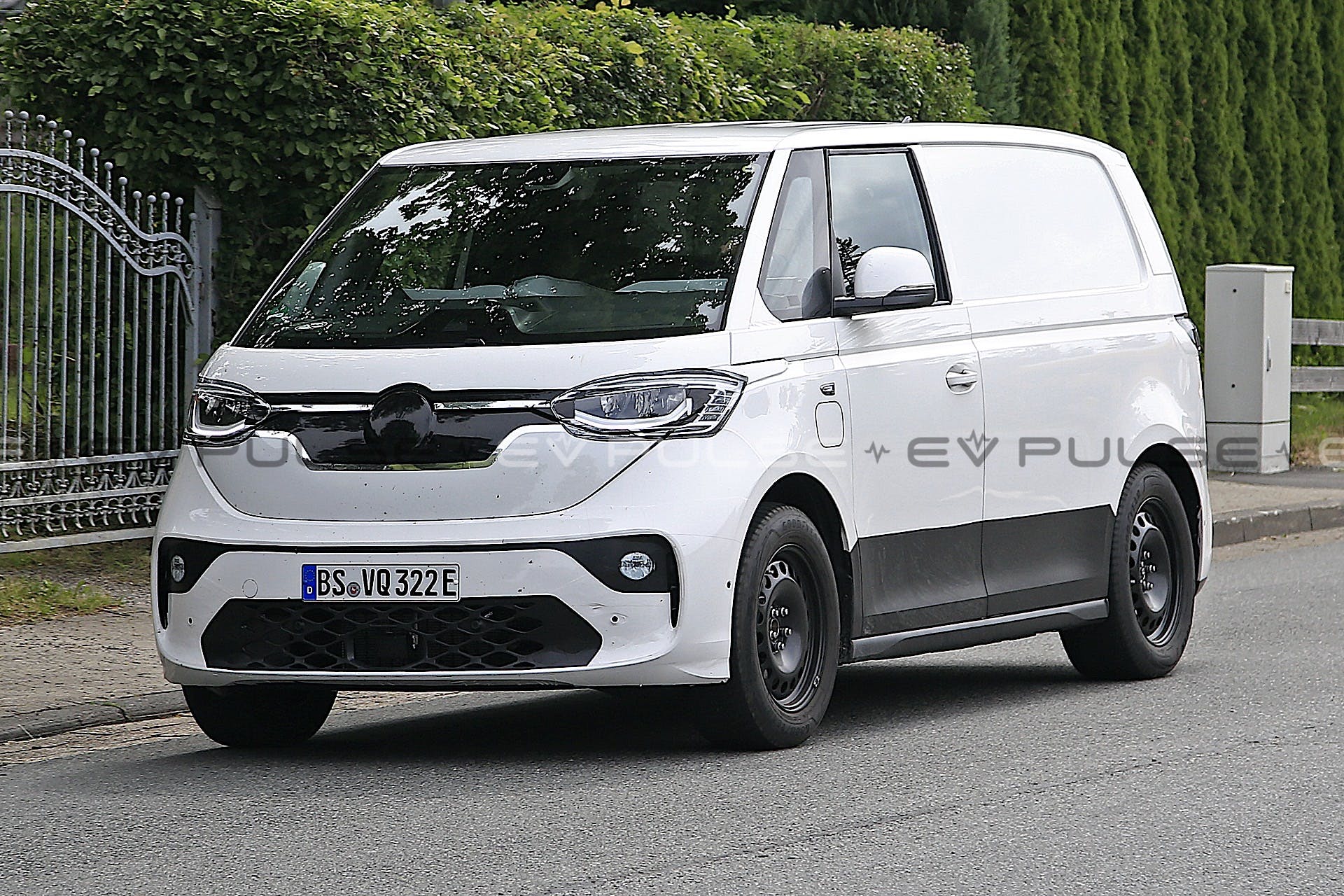 Well, that didn’t take long. Just a few days after we got our hands on photos of a 2024 Volkswagen ID. Buzz mule testing in the Austrian Alps, spy photographers caught another prototype wearing its production body. As expected, not much changed in its journey from concept to production.

You find the same design cues throughout this preproduction prototype that were on the show car. That means the 2024 Volkswagen ID.4 gets the new family looks that first debuted on the ID.3 hatchback. You get rounded headlights and a grille-free look. The only opening for cooling is on the lower front fascia and it appears that the radar sensor for collision prevention tech and adaptive cruise control will be housed there too. Flanking that opening are two small fog lights. Its nose appears to be slightly extended and more pronounced with the upper part looking like it opens to an area that allows you to access powertrain components. The ID. Buzz’s side profile remains similar to the concept. However, since this prototype is a cargo van, there aren’t any windows on it. In the back, you find a vertical liftgate and the thin horizontal taillights look like they’ve survived the transition from concept to production.

Looking inside this prototype’s interior, you’ll find the ID.4’s steering wheel, 5.3-inch gauge cluster, and 10- or 12.0-inch main touch screen plopped into the car. Even the odd light control cluster, which includes the defrosters/defoggers are also there. The final interior design hasn’t been added to the preproduction prototypes yet. The passenger variant should have three rows of seating and could offer extensive customizability just like the concept. That means you can make the ID. Buzz into a lounge if you’d like, giving it more appeal for families and consumers who simply need more space for their life. Cargo variants will ditch the windows and the extra two rows of seating in favor of maximizing interior volume for hauling.

Underneath the ID. Buzz’s skin is the Volkswagen Group’s MEB platform, which is dedicated solely to battery-electric vehicles. Currently, the ID.3 and ID.4 use the MEB architecture on the Volkswagen side while Audi has it in the Q4 e-tron and Q4 e-tron Sportback. We suspect that the van will get the long-wheelbase version to maximize interior space and ride comfort. Like the ID.4, the single-motor version should get 201 hp and 229 lb-ft of torque while the dual-motor variant will have 295 hp combined.

Two battery sizes will be available for the ID. Buzz: a standard 48-kWh unit and an optional 111 kWh one. It’s unlikely that the U.S. will get the former once the ID. Buzz arrives on our shores. With the big battery, expect the van to be able to travel up to 340 miles per charge on the WLTP cycle. On the EPA cycle, the ID. Buzz’s range is estimated to be shorter because it’s more conservative.

The 2024 Volkswagen ID. Buzz is expected to go on sale in Europe first as a 2023 model. It will eventually come to the U.S. as a 2024 model and the second model in the brand’s ID range in North America following the ID.4 crossover. Think of the ID. Buzz is the spiritual successor to the Microbus, on this time it’s completely electric and will be available in both passenger and cargo versions.