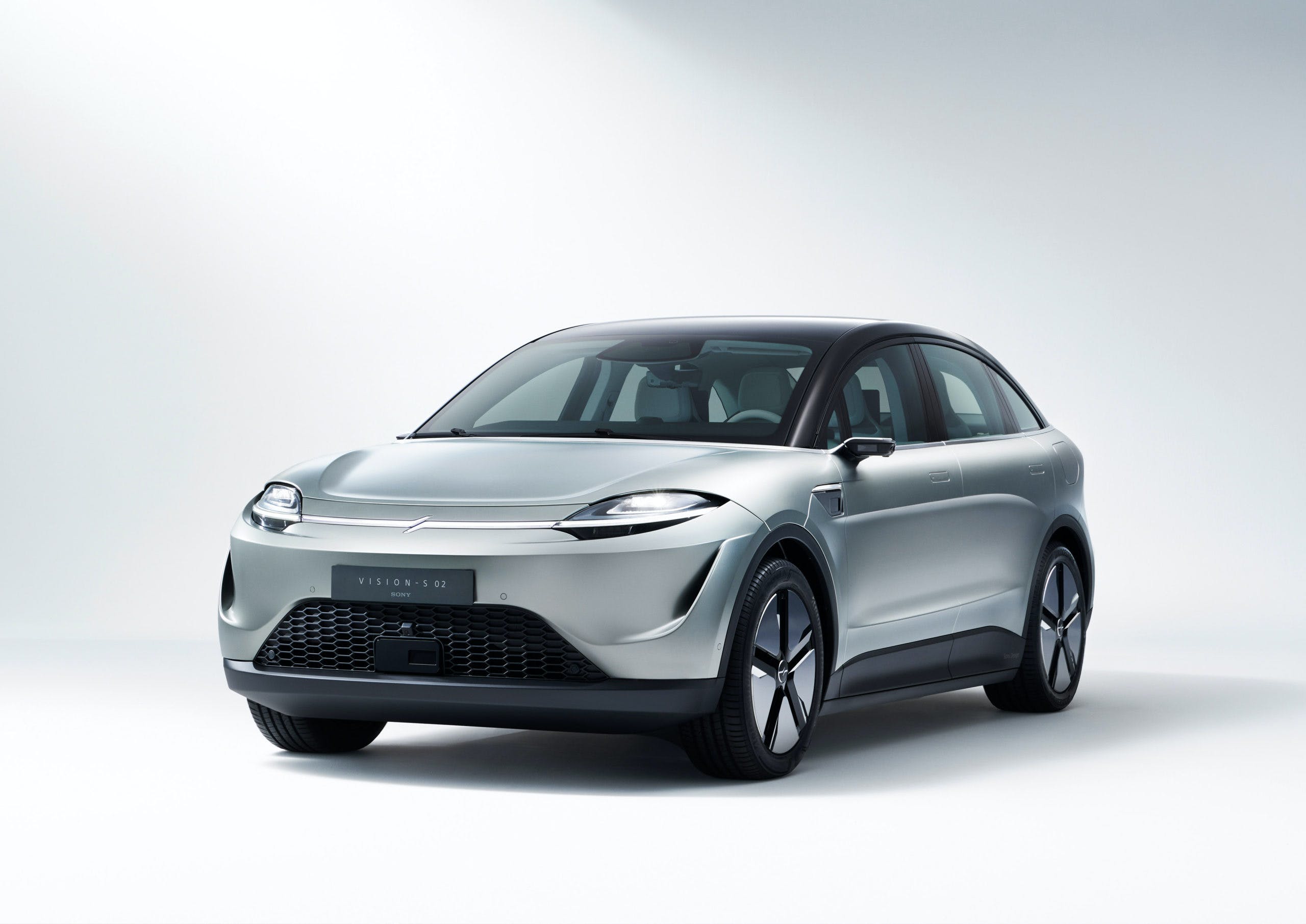 The 2022 CES Show served as the stage for the world debut of the Sony Vision-S 02 prototype, a crossover with seating up to seven. This vehicle signals Sony’s intention to enter the automotive space with two battery-electric vehicles. Like the Vision-S 01 sedan shown two years ago, the Vision-S 02 has a similar front fascia. Even the side profile is nearly the same with the biggest difference being the crossover’s taller greenhouse. It’s also on the same dedicated EV/cloud platform as the Vision-S 01 sedan, which is already undergoing testing on public roads.

Like its sedan sibling, the Sony Vision-S 02 has two 200-kW electric drive motors, one mounted on each axle. That’s about 536 hp combined. It also gets AWD standard and has a top speed of over 112 mph. An air suspension is standard with control arms in all four corners as are staggered tires on 20-inch wheels. However, Sony didn’t disclose its range and battery size. In terms of size, the Vision-S 02 has similar dimensions to mid-size three-row crossovers like the Kia Telluride but with a longer 119.3-inch wheelbase.

Sony prioritized safety and mobility for the development of the Vision-02. A full array of driver assistance-oriented equipment surrounds the entire crossover including CMOS image sensors and LiDAR sensors to enable the vehicle to sense three-dimensional space. Together with the new HMI system, the crossover will be able to judge its surroundings more accurately, helping the driver operate the car more efficiently. The Sony Vision-02 prototype will eventually get level 1+ driver assistance features, which are currently undergoing verification tests in Europe before they’re released for public roads.

Improved infotainment functions come courtesy of time-of-flight sensors used in the cabin. They detect gesture and voice commands to improve the interface’s usability. Occupants will also be able to customize the display theme and how the vehicle sounds when accelerating or decelerating. Certain vehicle functions like key locks and user-specific specifics can be synchronized by linking with the cloud via mobile communication, which includes 5G capability. Sony is also testing remote operations by leveraging its knowledge and technologies gained from developing smartphones. It tested the feature on a Vision-S 01 by conducting driving experiments that connected Japan and Germany with 5G.

To improve the entertainment experience, Sony installed seat speakers that create a three-dimensional sound field to get a proper surround sound experience. There’s also an integrated video service that lets you play movies on any of the Vision-S 02’s multiple screens. If that’s not enough, another remote service allows you to play PlayStation games streamed into the car via the cloud or a remote connection to the console in your home. Like the Vision-S 01, the Vision-S 02’s dash is dominated by three massive screens housed under a single panel. There are two additional screens, one mounted behind the driver and front passenger seat, for second and third-row passengers’ entertainment.

Sony intends to enter the automotive space with the establishment of a new division called Sony Mobility, Inc. This arm will be tasked with exploring possibilities in how the company can enter the EV market by employing its artificial intelligence and robotics technologies. Sony’s initially hinted that it was dabbling in EVs at the 2020 CES Show when it introduced the first prototype of the Vision-S 01 sedan.