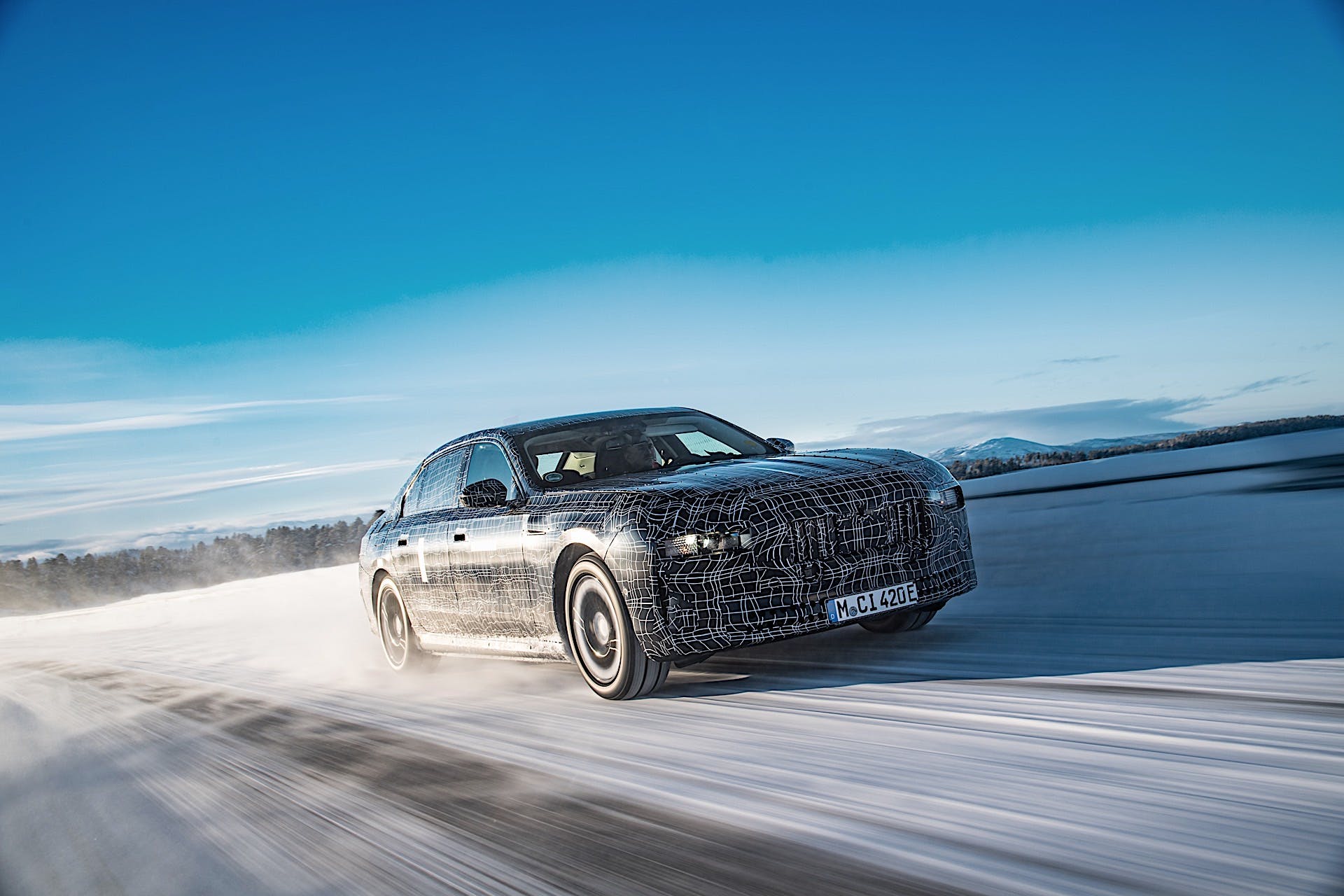 BMW has officially confirmed its all-electric flagship sedan by releasing photos of a camouflaged prototype undergoing cold-weather testing. Although most of the design cues are still hidden, the massive enclosed twin-kidney grille is there. The BMW i7’s design appears to be an evolution of the current 7 Series, which was the first to adopt thin LED headlights and the gaping grille.

BMW is currently putting the i7 through its driving dynamics testing near the Arctic Circle in Arjeplog, Sweden. There, engineers can use frozen surfaces and snow-covered roads to evaluate the suspension and powertrains in the toughest winter conditions. The BMW i7’s suspension, steering, braking, and stability systems will also be fine-tuned in harsh conditions to match that of the next-generation 7 Series. It must be designed to balance sportiness and ride comfort. Engineers must tune the wheel suspension, springs and dampers, and other components that contribute to the car’s driving behavior to get that ideal mix of agility and compliance.

Sweden’s Lapland region provides the best testing ground for fine-tuning the i7’s driving character because of the harsh climate. Some of the test surfaces also include frozen lakes where engineers can make more precise adjustments to the suspension in low-friction situations. This is also where the company tweaks the steering calibration and its Dynamic Stability Control System’s (DSC) functions. In the case of battery-electric vehicles, BMWwill make accurate calibrations to make sure that handoffs from regenerative to friction braking are seamless.

The winter testing program also emphasizes the i7’s all-electric powertrain. BMW’s fifth-generation eDrive technology, which is already used by the iX will power the brand’s flagship EV sedan and will be put through extreme conditions in subzero temperatures to see how it performs. Two versions of this powertrain are offered in the iX. In the xDrive40, its two electric motors make 300 hp combined. The xDrive50 model, on the other hand, generates a healthy total output of 516 hp and 564 lb-ft of torque and an estimated range of 300 miles per charge.

Like the iX, the i7 will only be available with the more powerful version. An M performance variant could join the lineup too with even more power. The iX xDrive50’s 111.5-kWh battery is capable of DC charging at rates of up to 200 kW, enabling it to regain 90 miles in 10 minutes. Expect the same battery pack to make its way into the i7, which will be the largest sedan in BMW’s i sub brand. It will be underpinned by the BMW Group’s Cluster Architecture (CLAR), which can accommodate everything from a standard internal combustion powertrain to hybrids and battery-electric propulsion systems.

The BMW i7 will be the third addition to the all-electric i family following the i4 and iX. Like the i4 being the EV version of the 4 Series Gran Coupe, the i7 is essentially an all-electric 7 Series, sharing the same design as BMW’s next-generation flagship. More vehicles are expected to get all-electric variants, including the 5 Series, which will be offered as the i5 slotting below the i7. That model could share its powertrain bits with the i4, which has a range of up to 300 miles per charge, and a performance-oriented M50 model with 536 hp and 586 lb-ft. The same 83.9 kWh battery could be used in the i5 instead of the larger 111.5-kWh pack in the iX that’s also likely to find its way into the i7. In addition, an all-electric X1 is also joining the lineup and will serve as the entry point into BMW’s EV family.