Production Mercedes-AMG One brings Formula 1 technology to the streets 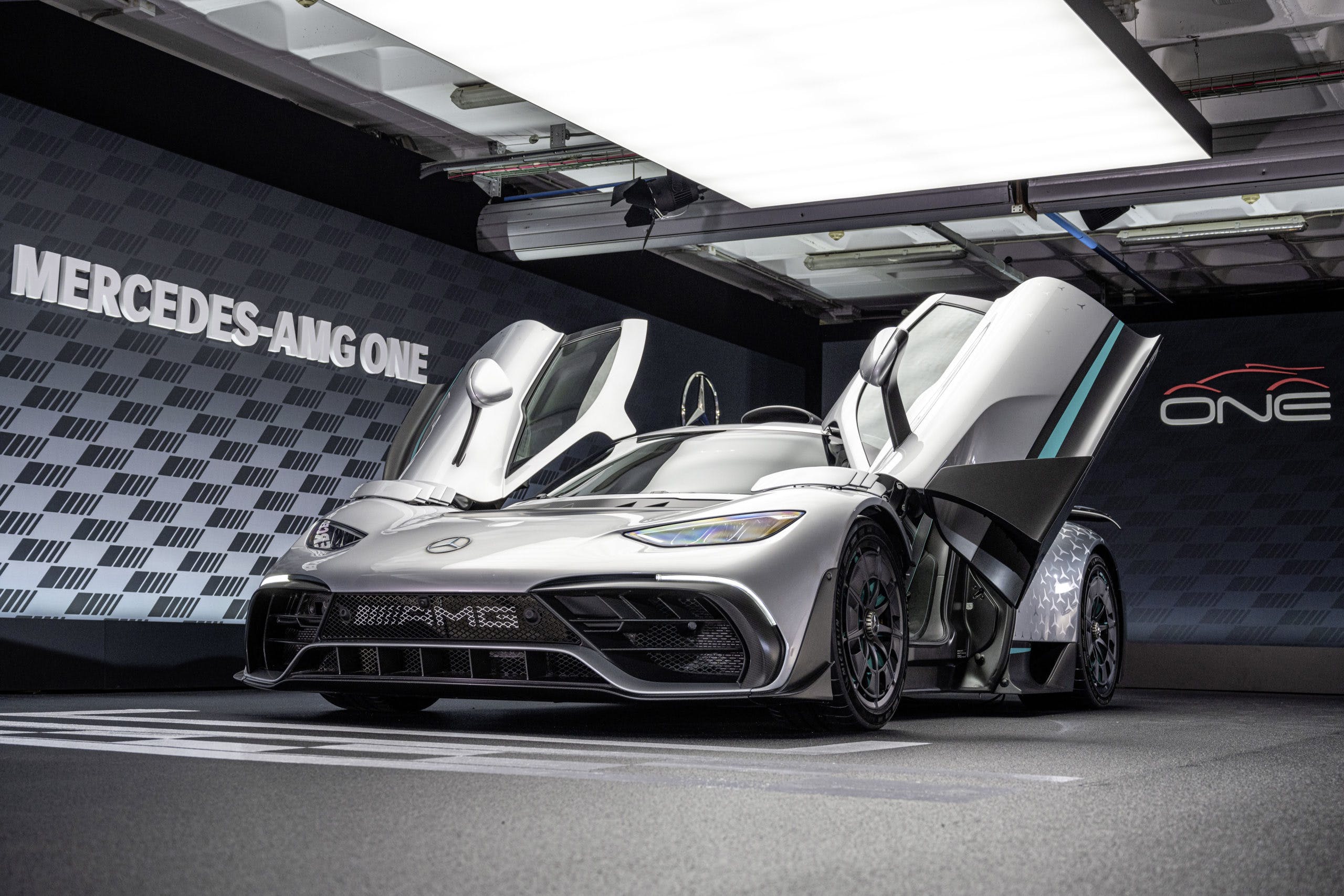 After numerous delays, the production Mercedes-AMG One has finally debuted. The hypercar takes Formula 1 technology and utilizes it in a street application. Its design for example optimizes aerodynamic performance from its low-slung stance, sweeping roofline, ducktail rear with a retractable spoiler, and a giant fin, something you see in prototype and LMP race cars. Cooling ducts including one on top of the roof show off the car’s purpose-built nature while the butterfly doors pay homage to the CLK-GTR, the last limited-run homologation vehicle produced by Mercedes-Benz.

The Mercedes-AMG One’s powertrain was developed in close cooperation with the division’s high-performance powertrain arm. It takes a turbocharged 1.6-liter V6 and couples it with four electric motors, a seven-speed automated manual gearbox, and an 8.9-kWh lithium-ion battery. The result is a staggering combined output of 1,063 hp that allows the AMG One to hit 100 km/h (62 mph) in 2.9 seconds before topping out at 352 km/h or 219 mph. Although the engine can rev to a sky-high 11,000 rpm, it is limited to 9,000 rpm in the interest of durability. The transmission also has a locking differential integrated within it and uses a four-disc carbon-fiber clutch to keep it light. Its gear ratios are also designed to provide even power delivery even after upshifts by keeping the engine revving higher.

A 90-kW electric motor helps spin the turbines within the turbocharger in the beginning before exhaust gases take over. Each axle gets a 120-kW electric motor, effectively giving the vehicle AWD. A fourth electric motor is positioned directly on the engine and connected to the crankshaft via a spur gear to further improve efficiency and performance.

Mercedes used a battery that’s been developed and proven on the race track by the Mercedes-AMG Petronas F1 Team. This is the same unit found on the AMG GT 63 S E Performance. In all-electric mode, the AMG One has a range of 18.1 km or 11.2 miles but that’s likely on the more lenient WLTP cycle. The car also gets a 3.7-kW onboard charger, allowing you to use a level 2 AC charger or a conventional wall outlet to recharge the battery. It also features a direct cooling system to keep the pack from dialing power down and keep it at its optimum operating temperature.

There are six drive modes in the AMG One. Race Safe runs the vehicle mainly in all-electric mode and only turns on the gas engine when you ask for more power. Race operates the vehicle in hybrid mode and uses the engine to continuously keep the battery charged. Race Plus is one of two track-specific settings that optimizes the car’s active aero, lowers the suspension, and activates a special performance management system. Strat 2 is the second and most hardcore of the two track-focused modes. In addition to what you get in Race Plus, you also get the powertrain’s full power at your disposal. Finally, there’s EV mode for all-electric driving, and Individual so you can tailor the vehicle to your liking.

Built on a bespoke, lightweight carbon-fiber monocoque from Formula 1 race cars, the AMG One focuses on cutting weight. Its suspension makes extensive use of aluminum featuring fives links and two adjustable push-rod spring struts. Mercedes says this keeps body motions in check even during rapid changes in direction without sacrificing comfort. The adaptive dampers’ settings are tied to the drive modes or can be separately customized via the Individual mode. You’ll be able to choose between Sport or Sport+ with the most aggressive setting lowering the vehicle by 37 mm in front and 30 mm in the rear. The AMG One also comes with a front lift system to keep it from scraping on steeply angled driveways. There are three levels for the electronic stability control system. In addition to fully on or completely off, there’s a sport handling mode that allows the car the generate higher yaw angles before the stability control reins you in.

Special 10-spoke alloy wheels with radial carbon-fiber partial cover have been designed to improve the AMG One’s aerodynamic efficiency. You can also opt for optional nine-spoke wheels with a center-lock technology that maximizes rigidity while keeping it light. Like the standard 10-spoke units, they also feature a carbon-fiber partial cover, which also optimizes cooling and heat dissipation for the brakes. Regardless of which wheel you get; they’re sized 19 inches in the front and 20 inches in the rear. They’re shod in staggered Michelin Pilot Sport Cup 2R M01 performance tires specifically developed for the Mercedes-AMG One. The sizes are 285/35/ZR19 for the front and 335/30ZR20 in the rear.

For improved downforce, the AMG One features active aero with three settings. Highway, which is available in Race Safe, Race, EV, and Individual modes, closes the louvers, extends the active flaps on the front diffuser, and retracts the rear wing. Track, which is available only in Race Plus and Strat 2 models, folds the front diffuser flaps for maximum efficiency, fully extends the rear wing and its flap, and opens the louvers to increase downforce on the front axle and add negative pressure on the wheel arches. Together with the suspension lowering the vehicle, this increases total downforce by up to five times depending on your speed versus the on-road drive modes.

Race DRS (Drag Reduction System), which can be activated via a separate button, retracts the rear wing’s flap and closes the louvers to reduce downforce by roughly 20%, allowing the vehicle to reach high speeds even faster.

The two-seat interior features two freestanding 10.0-inch displays and lots of carbon fiber to show off the material that serves as its foundations. Mercedes also used a square Formula 1-style steering wheel to pay homage to the AMG One’s racing roots. It features two AMG buttons to activate functions like the different drive modes and suspension settings. The car features bucket seats with seatbacks that can be reclined to 25 or 30 degrees, an adjustable pedal box, and a passenger footrest that you can also adjust. You’ll find storage and the engine start/stop button on the center console and you get a camera replacing the rearview mirror for optimal rear visibility. You’ll be able to choose between Magma Grey leather or black Dinamica microfiber upholstery with yellow contrast stitching on the seats and seatbelts.

Those who order a Mercedes-AMG One will be able to personalize their vehicles via the extensive options list. They’ll also be consulting with experts from Mercedes-AMG during the entire process. Pricing hasn’t been revealed but expect the AMG One to be a highly limited seven-figure vehicle to maintain its exclusivity.