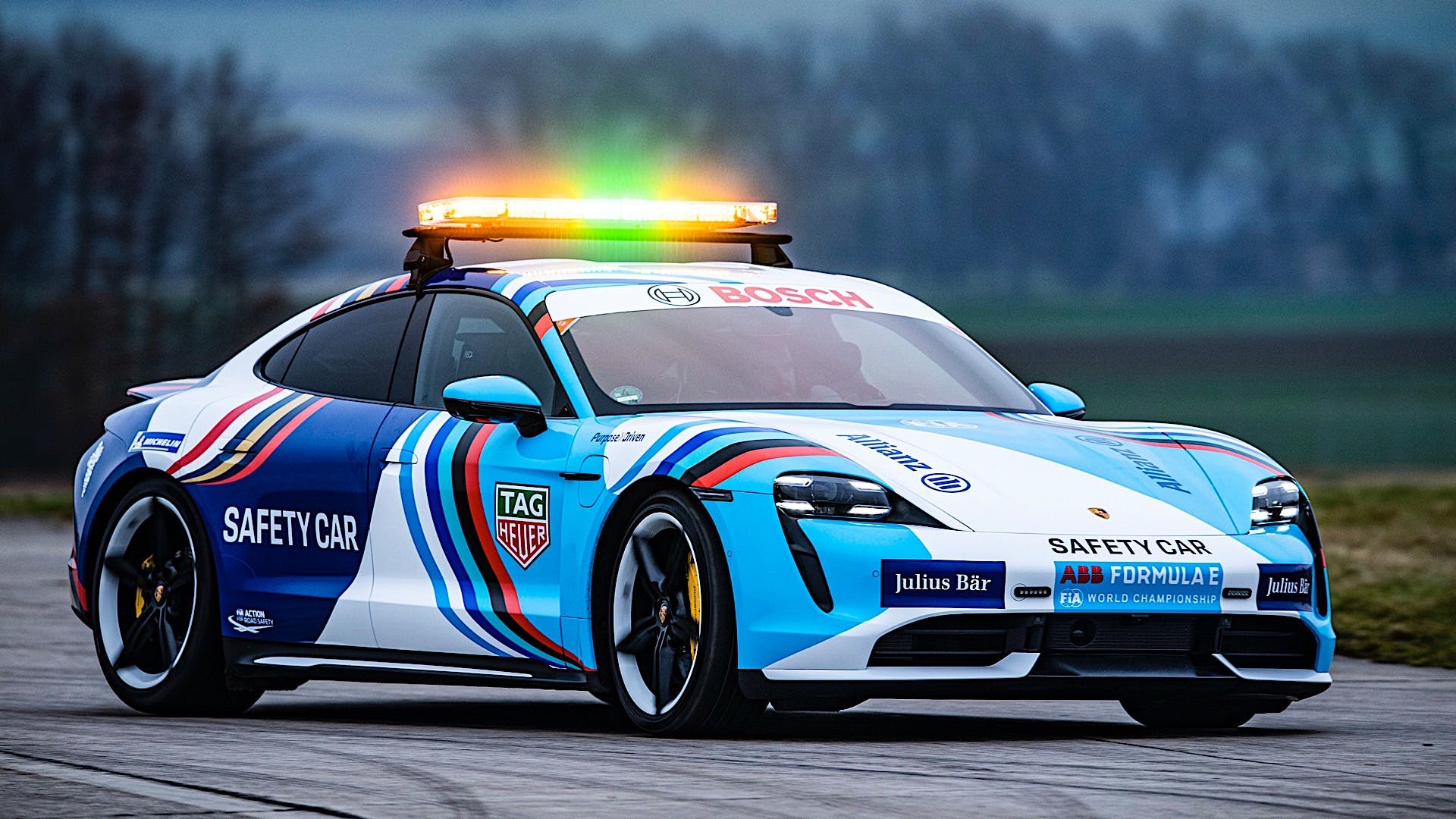 The Porsche Taycan Turbo S has been revealed as Formula E’s latest safety car. Scheduled to debut this season in the race’s first event in Diriyah, Saudi Arabia, the all-electric sports sedan wears the colors of the 11 teams participating this season and the colors of the FIA and Formula E. It sports a white main color accented with multiple shades of blue plus black, red, and gold. The car also wears the number 22 in acknowledgment of the 22 drivers competing this year. It is a tribute to the electric future of racing and a visual expression of diversity, community, and other social values.

“We’re proud that Formula E has entrusted a Porsche with this task — one that is important for the safety of its drivers,” says Thomas Laudenbach, Vice President at Porsche Motorsport. “With the Taycan Turbo S as the official safety car, we’re making an important contribution to track safety and also underlining the importance of Formula E for Porsche Motorsport. The distinctive design illustrates our commitment to the successful future of this innovative racing series. Although we’re rivals out on the track, we’re spreading this message to the world together. What’s more, we hope that this also enables us to appeal to a younger target audience who are not yet motor sport fans.”

Jamie Reigle, CEO of Formula E, expressed his delight with the Taycan Turbo S serving as the series’ new safety car. He noted that the car is “the pinnacle of high-performance electrified vehicles and “will light up Formula E city racetracks around the world.” The Turbo S is the most powerful member of the Taycan family and is available in sedan and Cross Turismo wagon variants. Between its two electric motors, it makes 616 hp. With Launch Control, that output goes up to 750 hp and 774 lb-ft of torque, enough to get it to 60 mph well below 3.0 seconds regardless of whether you get the sedan or the Cross Turismo. All that power is backed by a 93.4-kWh battery pack. The car also comes with sticky summer performance tires, adaptive air suspension, and available carbon-ceramic brakes. Unlike other EVs, the Taycan and its cousin, the Audi e-tron GT, have a two-speed transmission on its rear electric motor. It’s also one of the quickest charging EVs on the market with a peak DC charging rate of 270 kW.

To turn the Taycan Turbo S into a safety car, it got several modifications including a roll cage and bucket seats with six-point seat belts. The car also gets safety car lighting on the roof and the Marelli Logger system. Flashing lights were also installed on the front bumper. Driving the Taycan Turbo S Formula E safety car will be Bruno Correia, the long-standing pilot for the series. Inside, the Taycan also gets a fire extinguisher and a high-tech communication system to fully comply with all the service requirements of Formula E.

The Porsche Taycan Turbo S is the first Porsche vehicle to serve as the safety car for the Formula E series. Since 2014, the BMW i8, a 360-hp plug-in hybrid coupe or convertible was used until 2021. Last year, a Mini Cooper SE Hardtop dubbed the Electric Pacesetter by JCW was used sporting the same massive roof-mounted spoiler as the recent JCW GP.