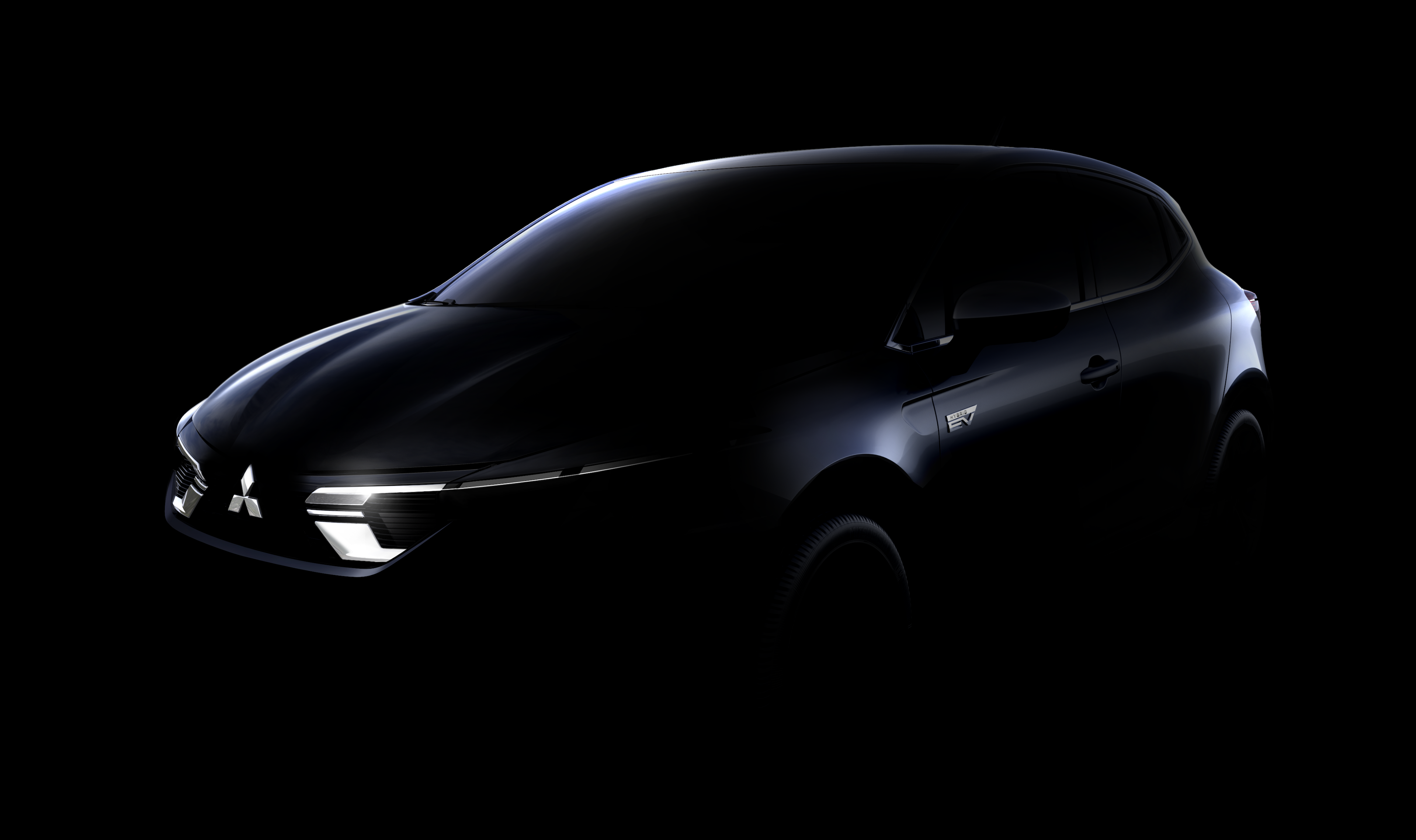 Now that’s a name we haven’t seen in a long time! Last used in 2013, the Mitsubishi Colt name will return next year on a new hatchback slotting above the Mirage. This will be the second Mitsubishi model to use a platform from the Renault Nissan Mitsubishi Alliance parts bin. The first one was the new Outlander crossover, which recently added a new plug-in hybrid variant featuring an improved powertrain and longer range. Mitsubishi released a single shadowy teaser photo that shows the car sporting the brand’s new shield-like grille and a hybrid badge in the front fender. In addition to a rounded greenhouse, the car also looks like it’ll have hidden rear door handles.

The Mitsubishi Colt will use the CMF-B platform underpinning the Renault Clio and Nissan’s Note and Juke. One big differentiator is that the Colt will be available as a hybrid. We suspect this hybrid powertrain is the same unit that recently debuted in the Juke Hybrid. It couples a 1.6-liter four-cylinder with an electric drive motor, a 15-kW starter generator, a 1.2-kWh lithium-ion battery, and multi-mode transmission (likely a planetary gear set). This system provides 25 percent more power than an equivalent pure internal combustion engine and is estimated to cut consumption by 40 percent in the city and 20 percent in mixed driving. The total system output of this new hybrid powertrain is reportedly around 140 hp.

Mitsubishi sold the Colt from 1962 to 2013. The nameplate even found its way to Dodge and Plymouth vehicles that were essentially rebadged versions of the Mitsubishi Lancer and Mirage sold in the North American market. Elsewhere in the world, the Colt had multiple variants including a wagon and a two-door hardtop convertible called the CZC. Taiwan remains the only region where the Colt name remained after the current car got discontinued in other markets. There, it’s called the Colt Plus and has received several refreshes.

There was a hot version called the Colt Ralliart Version-R in Japan featuring a 1.5-liter turbocharged engine making 152 hp and 150 lb-ft of torque when equipped with the manual transmission (CVT versions had 130 lb-ft). Switzerland got a special version dubbed the Colt CZT Ralliart, which had its engine uprated to 180 hp and 181 lb-ft and features several tweaks including a lowered ride height, reinforced rear axle, tighter shock absorber and spring coordination, and unique front and rear spoilers and side skirts. An all-electric model called the Colt MIEV was introduced in 2006 with a 20-kW electric motor mounted on each axle. That model was good for 93 miles per charge.

The new generation Colt will be built by Renault at the Bursa plant in Turkey. It promises to offer the latest technologies, which should include a new infotainment system and the alliance’s suite of driver assistance features. It will be part of the Renault Nissan Mitsubishi Alliance’s electrification offensive, which also sees the three brands introduce 35 new battery-electric vehicles by 2030.

Mitsubishi will use the Colt as a follow-up to the new Outlander, which has helped the brand revive its sales. Not far behind is the next-generation ASX/Outlander Sport. Like its two siblings, it will also offer an electrified powertrain, likely the same plug-in hybrid system as the Outlander PHEV. In China, Mitsubishi already released its first BEV, a compact crossover called the AirTrek that’s slightly smaller than the Outlander. Expect only the new Outlander Sport to find its way to the U.S. market. With hatchbacks and sedans declining in popularity, the likelihood of the new Mitsubishi Colt coming here is slim.

Written by Stefan Ogbac
Follow Author
RELATED ARTICLES
2023 Mitsubishi Outlander PHEV teased again with a trip down memory lane
2021 Rebelle Rally has a lot of electrified vehicles in the field
2021 Mitsubishi Outlander PHEV to get major powertrain upgrades
3 reasons why you need floor mats for your Tesla Model 3
RELATED ARTICLES
JOIN THE EV PULSE NEWSLETTER
Receive weekly updates on each of our electrifying articles.