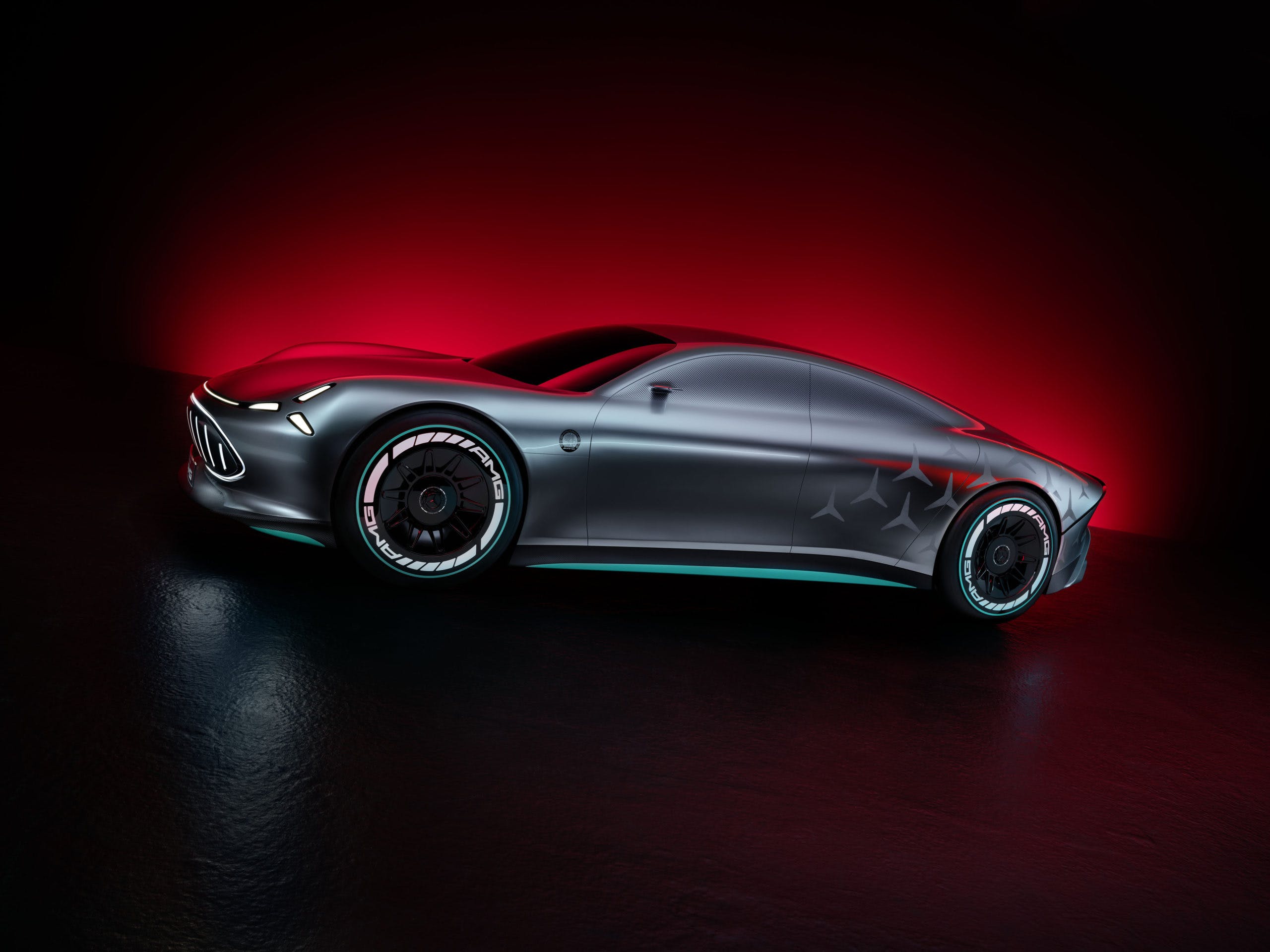 Mercedes-Benz unveiled its Vision AMG Concept, a show car following the Vision EQXX. This time, it previews what the future of the brand’s performance vehicle could be like and translates design cues in the current lineup to battery-electric vehicles.

Like the Vision EQXX, this low-slung four-door is shaped for optimum wind-cheating capabilities. It also doubles down on highlighting Mercedes-Benz’s identity with headlights patterned after the three-pointed star logo. Those are connected by a single LED strip spanning the whole front fascia. Mercedes also added an enclosed grille and used lighting to evoke the Panamericana grille used in current AMG models.

Moving to the rear of the Mercedes-Benz Vision AMG Concept, you’ll find more nods to the brand’s logo. It has three individual LED light bulbs, all of which have a star pattern within them. In contrast, the rear diffuser is finished in black while retaining the Mercedes-AMG Petronas color scheme.

“The Vision AMG shows in spectacular style what electrification could look like at Mercedes-AMG, while staying true to the brand aesthetic,” said Gorden Wagener, chief design officer of Mercedes-Benz Group AG. “The study’s extreme proportions create fascination and passion for performance – that’s what AMG is all about. The Vision AMG is an impressive embodiment of the brand’s dual polarity – the interplay of beauty and the extraordinary. At the same time, elements from the future, such as the light signatures with the illuminated high-tech grille, underscore the progressive evolution of our design language of Sensual Purity.”

The Vision AMG Concept is built on the AMG. EA architecture, developed specifically for performance-oriented BEVs. Mercedes says this vehicle also has a new powertrain and charging architecture but didn’t go into further details on those components. We suspect the latter might be its upcoming 800-volt charging system while the former are newly developed axial flux electric drive motors developed by YASA, a subsidiary of Mercedes-Benz. This design is lighter yet more powerful than current-generation motors. Additionally, there’s an active rear spoiler to help further improve the car’s aerodynamics. Even with the battery mounted flat under the passenger compartment, the Vision AMG sits lower than the EQS. Smart interior packaging means this sedan can fit four comfortably.

To highlight the Vision AMG’s performance motives, Mercedes made sure to pay homage to its successful Petronas Formula 1 team. These include the Alubeam Silver exterior color, the three-pointed stars emblazoned across the vehicle’s rear half particularly the shoulders and rear fenders, functional components finished in carbon fiber, and the 22-inch alloy wheels with aerodynamic cladding. The AMG logos throughout the vehicles, side sills, and diffusers are also finished in the Mercedes-AMG Petronas colors.

Mercedes-Benz’s AMG division has doubled down on electrification when it comes to crafting future performance cars. The brand has already revealed the AMG EQS and AMG EQE sedans, both of which have more than 600 hp from two electric motors.

The crossover counterparts, the EQS SUV and upcoming EQE SUV, are also getting high-performance variants. AMG is also doing plug-in hybrids during its transition period with the first being the 831-hp GT 63 S E Performance. It will likely be followed by the SL 63 S E Performance, which will use the same V8-based plug-in hybrid systems. They’ll eventually be replaced by the AMG. EA architecture used on the Mercedes-Benz Vision AMG Concept.