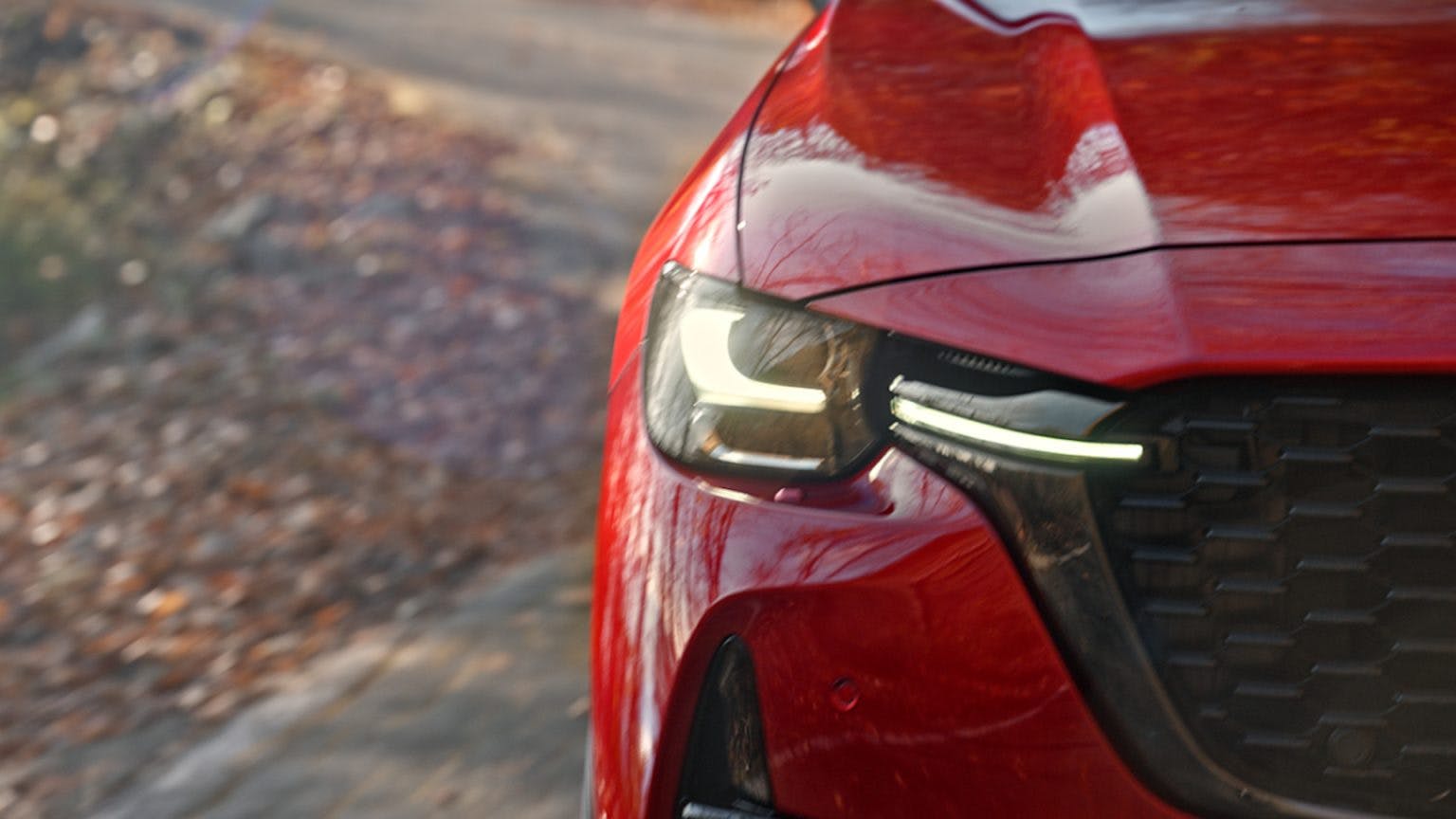 The first of Mazda’s so-called “Large Product Group” has been teased and it appears to be similar in size to the CX-5. The 2023 Mazda CX-60 will be the Japanese brand’s first plug-in hybrid and based on what the teaser shot has shown us, it’ll be a compact crossover. It’ll feature the next evolution of Mazda’s design language. From the single teaser photo, we see part of the corporate grille finished in gloss black and with LED running lights embedded in it. Additionally, the headlights have been reshaped, too, appearing more rounded and featuring C-shaped daytime running lights.

A video posted on Mazda Europe’s YouTube page gives us a glimpse of the crossover’s side profile. Immediately, you’ll note the similarities between the 2023 Mazda CX-60 and CX-5 because the fender flares don’t appear to be as wide and chunky as the CX-50 that will be sold only in the North American market. That could also hint that this is a smaller crossover in terms of exterior dimensions, which makes sense because the CX-60, like the other upcoming even-numbered Mazda models, are exclusive to markets like Europe and Japan. These are tailored specifically for these regions whereas the CX-50, CX-70, and CX-90 are developed for North America.

Where things won’t differ as much is under the hood because the vehicles on Mazda’s longitudinal large car platform will share the same powertrains. The CX-60 will be the first to use a new plug-in hybrid system based on a 2.5-liter four-cylinder coupled to an electric motor. Mazda says that this unit makes over 300 hp combined, putting it in the same ballpark as the Toyota RAV4 Prime. This will likely be the first implementation of Mazda’s new eight-speed automatic transmission, meaning this will be a parallel hybrid setup with the electric motor sandwiched between the engine and gearbox. A lithium-ion battery mounted under the passenger cabin should help keep the center of gravity low and provide a generous all-electric range.

The four-cylinder-based system could see duty in North America powering the Mazda CX-70, which will slot between the CX-50 and CX-90 in terms of size. That will pit that crossover against entries like the Hyundai Santa Fe Hybrid and PHEV, Kia Sorento Hybrid and PHEV, Ford Explorer Hybrid, and Toyota Highlander Hybrid. Mazda could have a major advantage because that would make the CX-70 the most powerful entry among the electrified mid-size crossover class.

Mazda’s first hybrid vehicle in the U.S. will be the CX-50 Hybrid built at the Huntsville, Alabama facility it co-owns with Toyota. Unlike the models on the large platform, which are rear-drive-based, the CX-5 uses a front-drive-based architecture and will use a Toyota-sourced hybrid system. We suspect it’s the same unit found in several Toyota and Lexus products with an output ranging between 208 to 245 hp in the standard hybrid guise or up to 302 hp in plug-in hybrids like the RAV4 Prime and NX 450h+. Mazda hasn’t revealed many details on the electrified CX-50 and it may use its homegrown 2.5-liter four-cylinder instead of Toyota’s unit of the same displacement.

Following the 2023 Mazda CX-60 will be a three-row called the CX-80, which could use the same plug-in hybrid system. In North America, Mazda will add the CX-90 to replace the CX-9 and serve as the brand’s new flagship three-row crossover. That model is expected to use a plug-in hybrid system based on a new inline-six engine from Mazda’s Skyactiv-G family. Currently, Mazda’s only electrified offering in the U.S. market is the MX-30 EV sold exclusively in California. A series plug-in hybrid version with a rotary engine acting as a generator is expected to join the lineup sometime this year. Unlike the plug-in hybrid systems on the larger crossovers, only the electric motor will turn the wheels on the MX-30 PHEV.