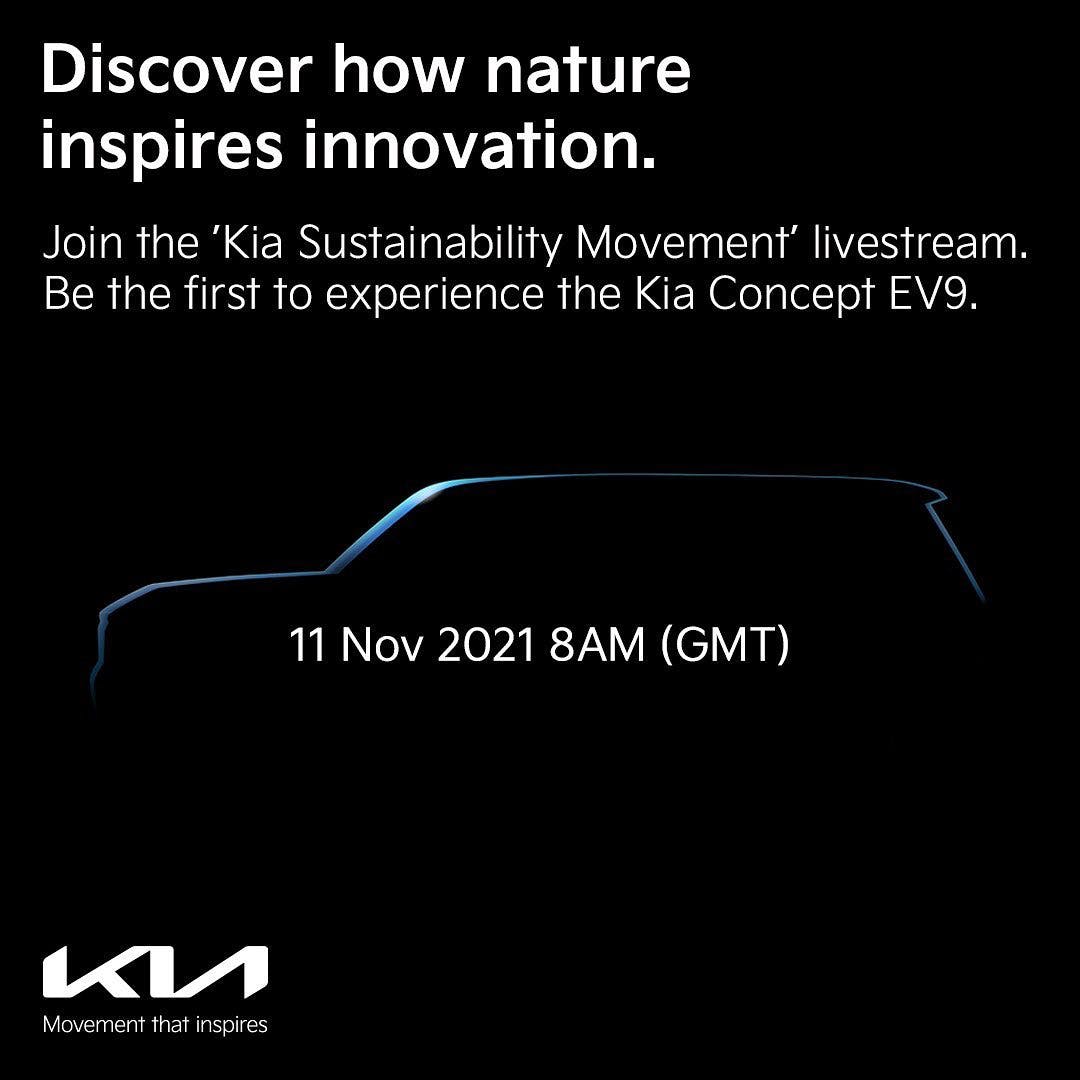 Kia took to Instagram to tease a concept car that it will show on Nov. 11. Called the Concept EV9, this is the second of a range of upcoming battery-electric vehicles that the brand will release as part of its Plan S strategy. First previewed earlier this year, Kia’s product offensive includes over a dozen electrified vehicles arriving by 2025. Many of those like the Kia Concept EV9 will be on the Hyundai Motor Group’s E-GMP platform, which was developed specifically for EVs.

We first got a glimpse of the Kia Concept EV9 when the brand unveiled its new logo. It was teased alongside 10 other vehicles including a smaller crossover, two sedans, and several commercial and ride-sharing models. Now, we finally have another teaser showing off the electric crossover’s silhouette thanks to Kia’s Instagram post. Its upright greenhouse and squared proportions scream all-electric Telluride, meaning it’s a three-row.

The Concept EV9 is possibly the sister model to the Hyundai Seven Concept, which will eventually morph into the production Ioniq 7. However, Kia is most likely taking a different approach to distinguish its brand identity. That means the Concept EV9 could be the more rugged and sporty model to bring it in line with its current crossover lineup. The EV9 could get more powerful electric motors considering its size and the larger battery pack that it will most likely use to get to the magic 300-mile range on a single charge.

There’s also a possibility that Kia will do its unique interior layouts to further distinguish the EV9 from its Hyundai sibling. While the latter appears to focus on practicality, flexibility, usability, and the lounge-like ambience, the former could have a more traditional seating layout or be geared more toward outdoorsy adventures. That means the EV9 could have a more rugged look to further hint at its sporting intentions.

The possibility of the Concept EV9 being a thinly veiled production vehicle is pretty high. This may be Kia giving us a glimpse of the production vehicle, which could be due soon. By 2025, Kia will offer at least 13 battery-electric vehicles across the globe. That figure includes models on two platforms: E-GMP and a heavily modified version of the architectures used in the current Soul and Niro. The first of those vehicles is the EV6, a low-slung crossover coupe with an available 576-hp GT variant.

Following the EV6 will likely be the production EV9, which is expected to serve as the flagship electric crossover. On the other end of the spectrum is the second-generation Kia Niro, which will be offered in hybrid, plug-in hybrid, and battery-electric versions. Kia will only sell the Niro as a PHEV and an EV in the U.S. A fourth crossover similar in size to the Seltos is also in the cards along with two sedans. One of them appears to be an all-electric successor to the Stinger and could serve as the flagship four-door alongside the EV9. The other looks like a compact and could be aimed directly at the Tesla Model 3.

Look for more information on the Kia Concept EV9 when it debuts on Nov. 11. Expect to see the show car in the metal at the 2021 Los Angeles Auto Show alongside what could be the second-generation Niro. We may also learn more regarding Kia’s electrification strategy at the show as the brand continues to add more hybrids, PHEVs, and EVs to its lineup.