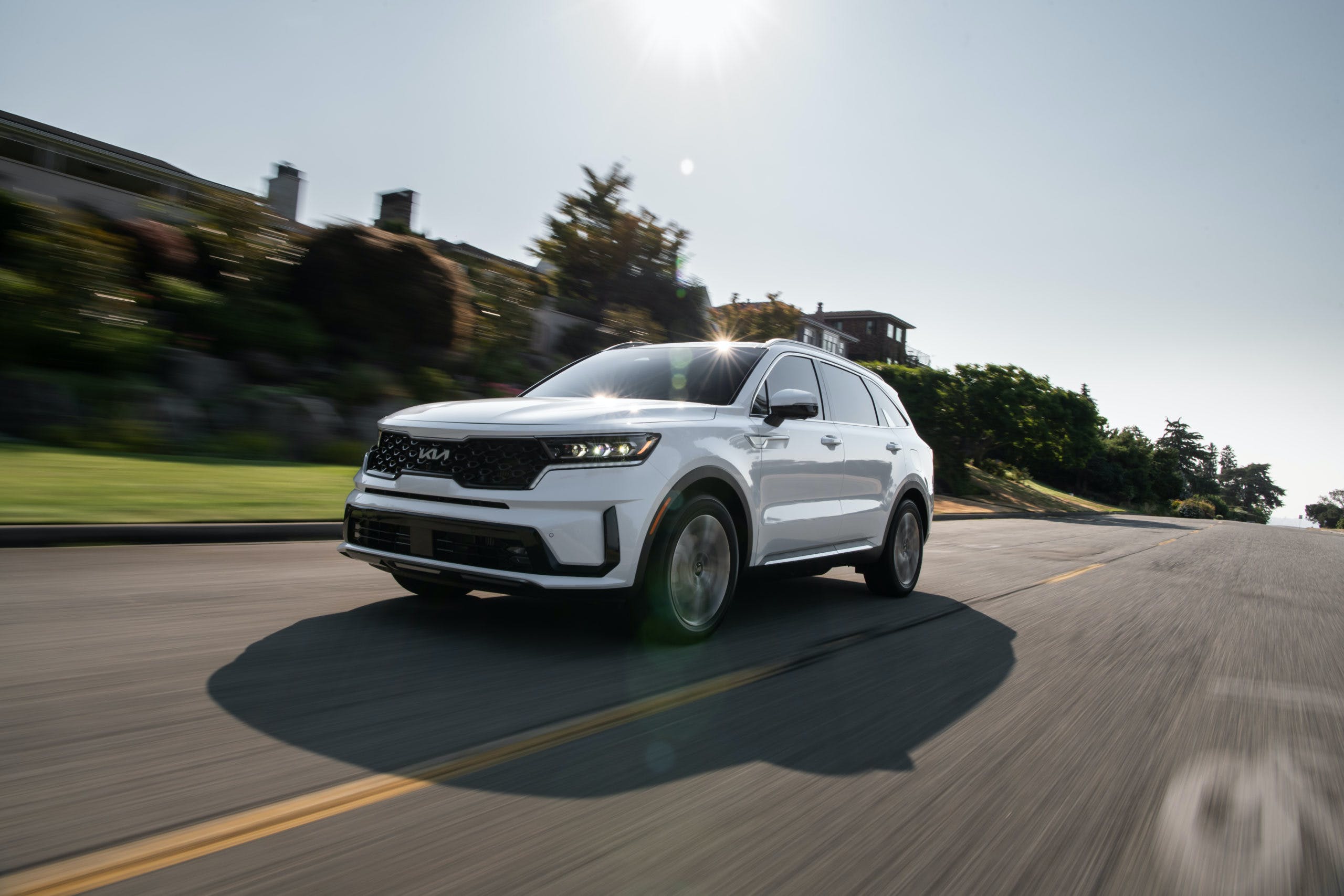 The EPA has released the efficiency ratings for the 2022 Kia Sorento PHEV and we like what we’re seeing. In all-electric mode, the Sorento PHEV can travel up to 32 miles, meaning you can easily commute emissions-free, especially if you don’t live far from work. When driven as a hybrid, the EPA rates the Sorento PHEV at 35/33/34 mpg city/highway/combined. With a full tank and fully charged battery, the crossover can travel up to 460 miles.

The closest competitor to the 2022 Kia Sorento PHEV is the mechanically similar Hyundai Santa Fe PHEV. That crossover can travel up to 31 miles in EV mode and is rated for 33/32/33 mpg when driven as a hybrid. However, its total range is only 440 miles, which is 20 miles lower than the Sorento PHEV, which is slightly larger and has a longer wheelbase.

Powering the 2022 Sorento Hybrid is a 1.6-liter turbo-four coupled to a 99-hp electric motor, a 13.8-kWh lithium-ion battery, and a six-speed automatic transmission. The total system output is 261 hp. Hyundai also uses this powertrain on the Santa Fe PHEV and the Tucson PHEV. Kia’s upcoming Sportage PHEV will also use this plug-in hybrid system and could be the new range-topping option. The Sorento PHEV also gets AWD standard unlike its non-plug-in sibling, which is only available with FWD.

When it goes on sale before the end of the year, the newest member of the Sorento family will be the only three-row crossover available with a plug-in hybrid powertrain. Standard hybrids include the Ford Explorer Hybrid, Toyota Highlander Hybrid, and Kia’s own Sorento Hybrid. You won’t find a three-row plug-in hybrid until you enter into the luxury segment with entries like the Volvo XC90 T8 Recharge and the Lincoln Aviator Grand Touring. Next year, the Sorento PHEV will be joined by the next-generation Mitsubishi Outlander PHEV, which will finally get three rows of seating instead of the current car’s two. However, that crossover veers closer to the compact segment in terms of size, meaning its third row will likely be not as usable as the Sorento’s and its cargo capacity with all seats up will be even smaller.

The 2022 Kia Sorento PHEV will be available only on the SX and SX Prestige grades. Think of it as an extension of the standard Hybrid which is offered exclusively in S and EX variants and only with FWD in North America. This means you’ll be able to get the crossover loaded to the gills with features. In addition to all of the driver assistance technologies found on the lower trims, expect the Sorento Hybrid to get extras like the Bose audio system, a 12.3-inch digital gauge cluster, and a larger 10.25-inch main touch screen with built-in navigation. You’ll also find more creature comforts like ventilated front seats, heated second-row seats, and leather upholstery on the PHEV.

Kia hasn’t announced what seating configurations will be offered on the 2022 Sorento PHEV. If it’s anything like the standard hybrid, it’ll likely seat up to six passengers because of the second-row captain’s chairs. We’re hoping Kia also offers a bench option for added flexibility and a seventh seat.