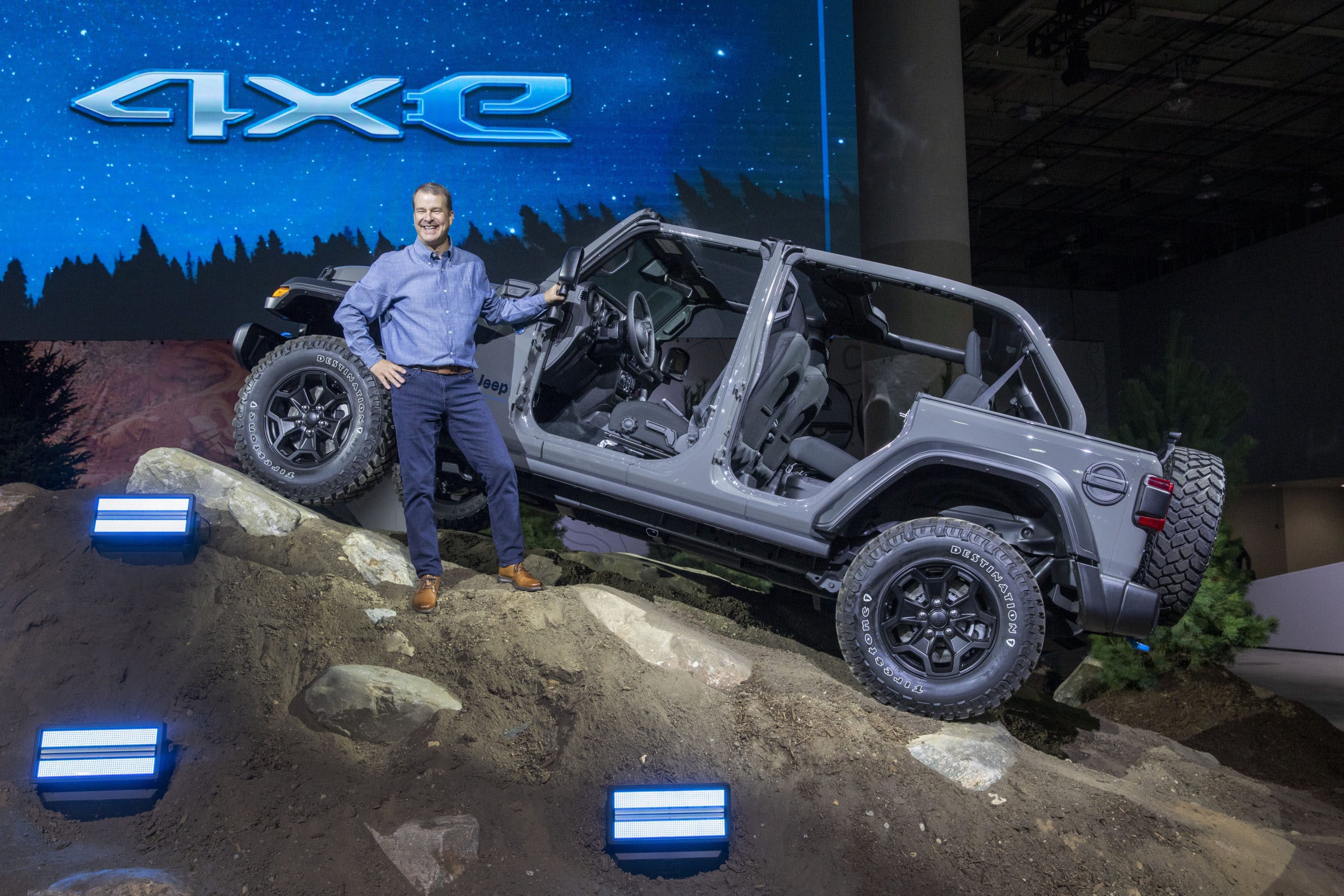 The 2022 Detroit Auto Show was a great opportunity to Jeep’s Jim Morrison to show the Secretary of Transportation what’s happening in Jeep land (including Camp Jeep). It was also an opportunity for us to ride along in a Wrangler Rubicon 4xe through Huntington Place and catch up on Jeep’s electrification strategy.

Announced at the show, Jeep will offer the 4xe variant on the Willys trim. This increases the accessibility of 4xe to more potential customers, which likely will increase the plug-in sales.

The first question we asked was about batteries. More PHEVs means needing more batteries, and if you haven’t noticed we are still in a supply chain crisis.

“We’re using the same battery provider,” Morrison says, “we just have access to more batteries now.” That seems like a good sign that things are improving, at least for them.

During his presentation, Morrison reminded the audience that Wrangler is the best selling PHEV. Though, if you look at sales numbers as a whole, Grand Cherokee outsells Wrangler.

We ask, “has Grand Cherokee 4xe reached Wrangler 4xe sales? Do you expect it to?”

“We’re not sure if Grand Cherokee [4xe] will overtake Wrangler [4xe]. Wrangler is bringing in new customers to the brand, and adding more models will increase that,” he says. But not to leave us hanging, “Grand Cherokee 4xe production is still ramping up so we’ll know more soon.”

Gladiator seems like the next logical step for electrification, as it shares much of the equipment with Wrangler. “Gladiator is a success for us. It’s breaking records like Wrangler. We’re pleased with the product,” Morrison says.

But what about giving it the 4xe treatment? “Remember, I said that all Jeeps will be electrified by 2025. It’s a reasonable assumption,” he says, as we’re leaning forward in our seats stopped on a 40 degree downward slope suspended by our seat belts. If you haven’t experienced Camp Jeep at an auto show, it’s a thrill.

Was that official confirmation of Gladiator 4xe? Not directly. But if Jeep is happy with Gladiator and Gladiator sales — and it is — then it’s gotta get the treatment. We wouldn’t be surprised if we saw news on that front as early as next year, but we’re purely speculating at this point.

“We’re still in the business of meeting customer demands, which is why we offer 4xe alongside 392 in Wrangler,” he reminds us at one point.

While he was pretty hush-hush on the upcoming electric Wrangler, he reminds us that you’ll be able to experience the full doors off, all-weather experience of Wrangler in the upcoming Recon. Unfortunately it wasn’t on display to check out.

Finally, we learned that Morrison took the Secretary of Transportation, Pete Buttigieg, for a ride around Camp Jeep. That was surely a great opportunity to talk about electrification, the infrastructure legislation recent passed, and how to improve the experience for customers. And he probably did. But when we asked, “What did you talk to the Secretary about?”

“His twins,” Morrison, a father of twins himself, replied.