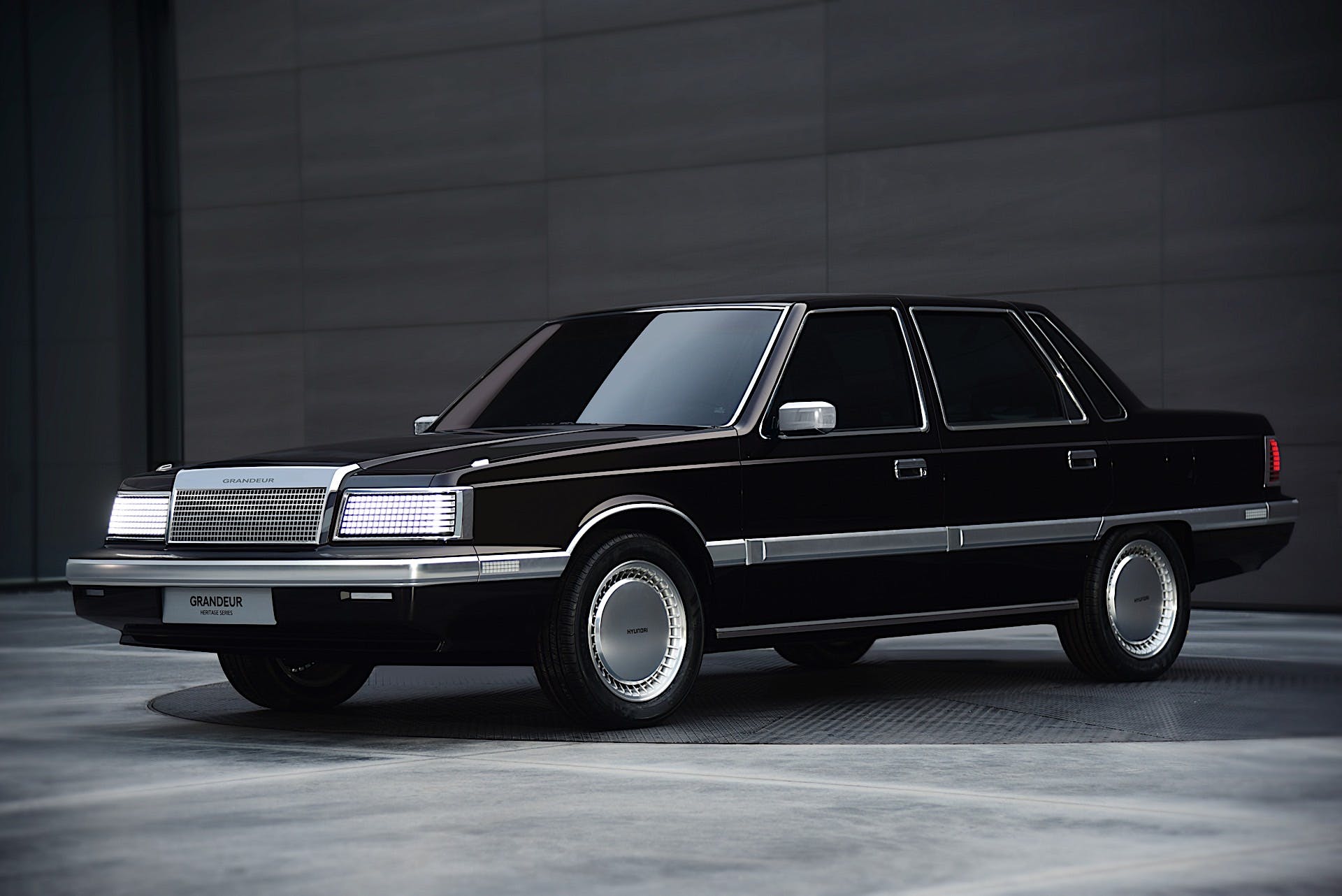 The Hyundai Grandeur was the de facto flagship sedan for the Korean brand since it hit the streets of Seoul in 1986. Since then, the car has found its way around the globe including the United States where it was sold under the XG and Azera names from 1998 to 2017. To celebrate the Grandeur’s 35th anniversary, Hyundai has gone and given a 1986 example the restomod treatment turning it into a battery-electric vehicle.

Part of Hyundai’s Heritage Series restomod, this specific Grandeur features the same pixel-like exterior light pattern that first debuted on the Ioniq 5 to hint at its electrified nature. Other changes include new side mirrors, covered wheels, and side body cladding. Inside, the interior gets front seats finished in burgundy velvet inspired by the original Grandeur and it is complemented with laced Auburn Nappa leather in the back. The center console features a hidden pop-out bin for valuable items. Hyundai also kept the single-spoke steering wheel to stay true to the 80s vibe.

To add to the retro-modern theme, the designers included the latest multimedia technologies like a wide touch screen replacing the dials and buttons. An 18-speaker 4way4 audio system developed by South Korean sound designer Guk-Il Yi has been added. Hyundai says that the unit delivers “rich sound with magnificent clarity and deep bass.” This is achieved partly due to the composition of the Grandeur’s center console and dashboard, which the automaker says was developed on the acoustic theory of a concert hall. The soundbar’s piano function can also be played via the audio system but only when the vehicle is parked.

Hyundai added bronze light beams that start at each corner of the dashboard and extend around the Grandeur’s cabin. In the rear seats, so-called “infinity mirrors” reflect light to give second-row passengers a wider sense of space and amplify the mid-80s luxury car vibe.

“As our designers conceive the future, it’s important to look back on what we’ve created in the past and find inspiration in it,” said Hak-Soo Ha, Head of Interior Group of the Hyundai Design Center. “With the Heritage Series Grandeur, our designers have reinterpreted an important part of Hyundai’s history as a wonderfully unique blend of vintage and contemporary that reflects the boundless possibilities of our EV era.”

The Grandeur wasn’t the first vehicle of Hyundai’s Heritage Series. The Pony, a compact car from the 1970s designed by Giorgetto Giugiaro, also got the electrified restomod treatment earlier this year. It, too, retained all the retro design cues and mixed modern technology. Hyundai’s designers even included a mobile phone tray, voice-activated steering wheel, and touch-operated gear selector. On the outside, the Pony Heritage Series also got pixel-style exterior lighting with eight-bit graphics incorporated into the lights.

Most of the modern design cues found in the Heritage Series Hyundai EVs came from the Hyundai 45 Concept. That vehicle was inspired by the original Pony and eventually became the blueprint for the brand’s first dedicated battery-electric vehicle, the Ioniq 5. Hyundai has since made extensive use of the pixel light theme in concepts like the Prophecy, which previews the Ioniq 6 sedan. The upcoming Seven Concept, a three-row crossover that gives us a glimpse of the Ioniq 7, was teased sporting the same light pattern.