Hyundai Seven Concept teased as a preview of the Ioniq 7 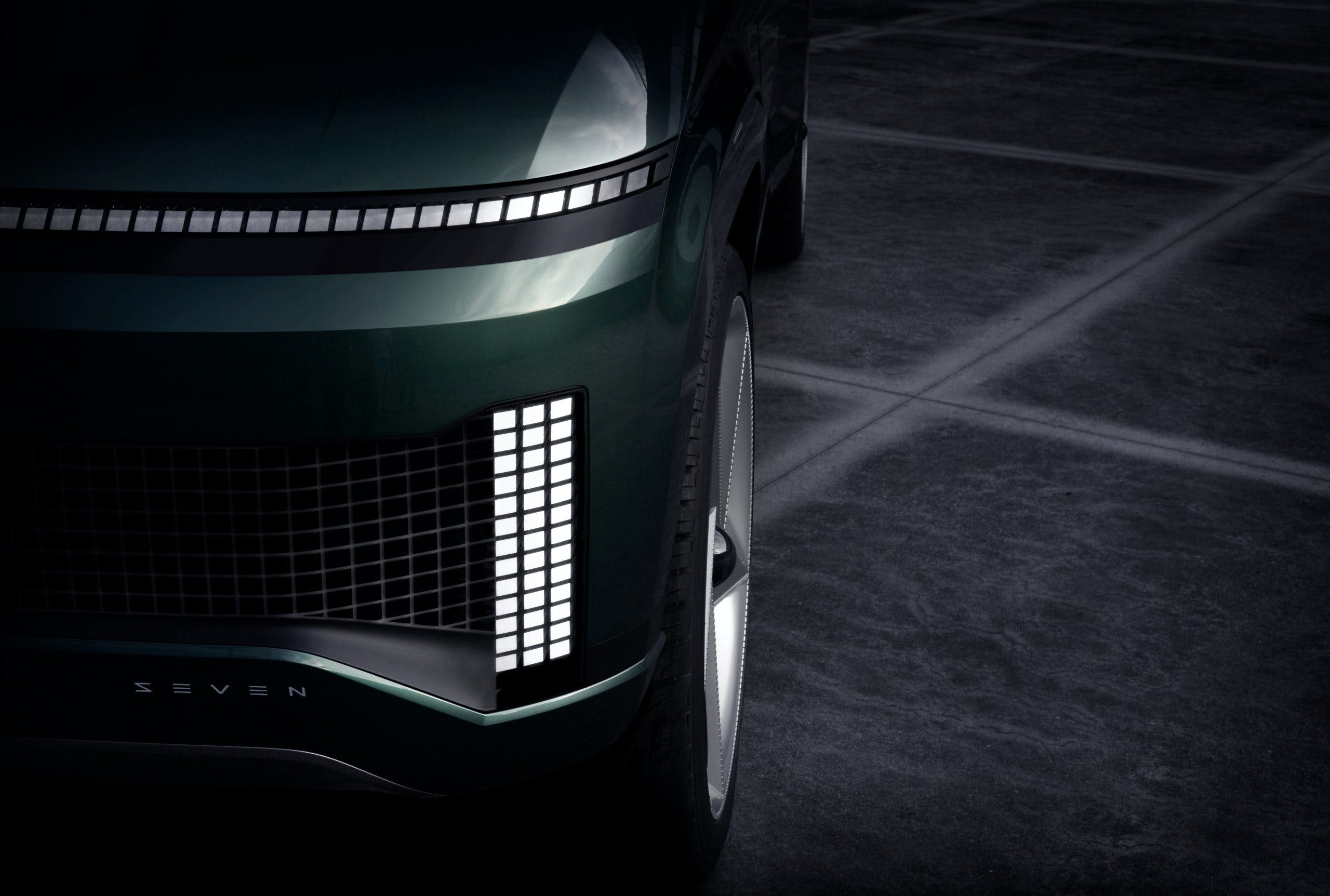 The third member of the Ioniq sub-brand has been teased ahead of its official debut on Nov. 17 at the 2021 Los Angeles Auto Show. Called the Hyundai Seven Concept, this previews what an all-electric three-row crossover could look like. Hyundai says this show car also hints at its future design direction and upcoming technologies.

Of the four teaser shots released, only one gives us a glimpse of the Hyundai Seven Concept’s exterior. It shows part of the Hyundai Seven Concept’s front fascia, which has the same pixel-style lighting as the Ioniq 5. The pattern, however, is different because it appears to mimic the tiered layout found across Hyundai’s crossover lineup. From the looks of it, the upper lighting spans the width of the vehicle while the lower vertical ones appear to be the main headlights.

The other three photos provide a quick peek at the interior, which looks like a living room. One shot shows off a single seat that appears to swerve and move around, hinting that the Seven Concept has autonomous driving capabilities. There’s also a photo of a lamp, hinting at the crossover’s lounge-like atmosphere. Another depicts what looks like a side table next to a sofa-like seat layout. A close-up shot of one of the seats reveals that the Seven Concept will make extensive use of recycled and sustainable materials.

Hyundai’s third Ioniq-branded vehicle, the Ioniq 7, is due in 2024 and the Seven Concept gives a glimpse at the upcoming three-row electric crossover. Like the Ioniq 5 and Ioniq 6, the Ioniq 7 will be underpinned by Hyundai Motor Group’s E-GMP platform developed specifically for battery-electric vehicles. This will likely have the longest wheelbase of the three vehicles in the Ioniq sub-brand and Hyundai could utilize that and that flat floor to offer unique solutions that add flexibility and additional practicality. It will also get the same 400- and 800-volt charging architecture, enabling the crossover to DC charge at peak rates upward of 250 kW.

The Ioniq 7 will be the most practical EV in Hyundai’s lineup because it’s sized like the Palisade but offers more practicality. Expect it to get the same conveniences found on the Ioniq 5 like the seats with integrated ottomans in both the first and second rows. It’s also possible that the third row could get a sliding function thanks to the flat floor. The movable center console could also find its way into the Ioniq 7 but it’ll likely remain only in the front half of the vehicle.

As for propulsion systems, it’s a no-brainer that Hyundai put two electric motors on the Seven Concept. This will likely carry over to the final production version of the Ioniq 7. While we don’t know the output, this model could be on the more powerful end of the spectrum considering the size of the crossover. It’ll also get a larger battery than the 77.4 kWh unit that will be offered on the Ioniq 5 in the U.S., meaning this rig will be heavy. The upright design won’t make this crossover as aerodynamic as the Ioniq 5 or the upcoming Ioniq 6 sedan. To counter that, a larger battery pack could be used so that the Seven Concept can travel around 300 miles per charge.

The Hyundai Seven Concept will debut at the 2021 Los Angeles Auto Show in a few weeks. Expect more juicy details on this family-friendly EV to be released at that time.