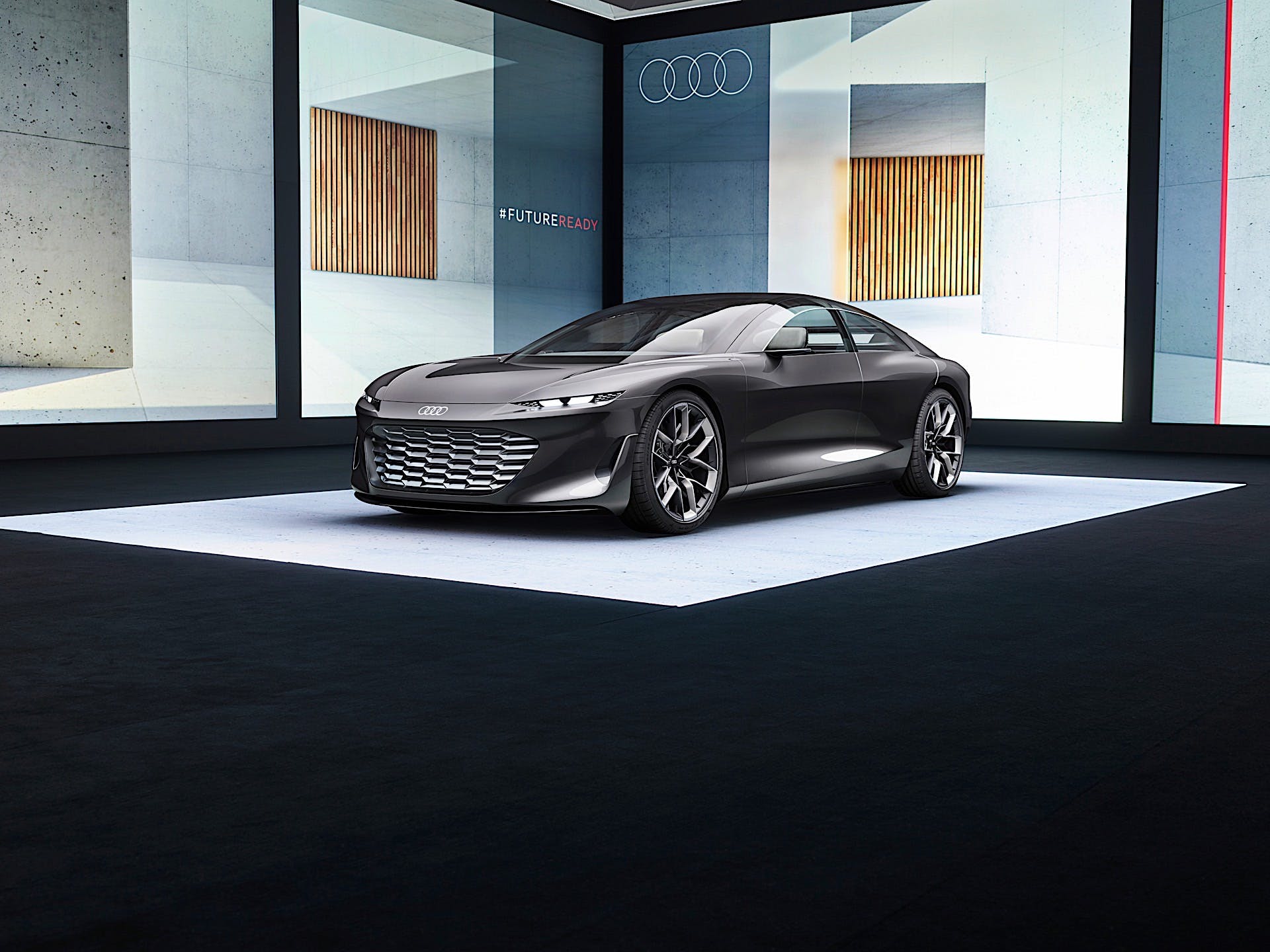 The Audi grandsphere concept has been unveiled ahead of its world debut at the 2021 Munich auto show. At 17.6 feet long, this big sedan is longer than Audi A8 L and draws inspiration from first-class flights and private luxury travel. It features suicide doors and no B-pillar to give occupants a sense that the car is welcoming them inside. The grandsphere concept is also capable of identifying its occupants and projecting out a pathway towards the vehicle. Once inside, the car will immediately revert to their preferred seat and climate control settings, their most recently used infotainment functions, and whatever the passenger was watching on their mobile device beforehand.

Ditching the traditional sedan look resulted in the Audi grandsphere concept looking like a four-door fastback. It has short overhangs and a rear decklid that tapers back quickly, preventing it from looking conventional. The grandsphere concept also avoids looking like a spaceship because of its elegant silhouette and clean overall design. It even features an enclosed version of Audi’s corporate grille complete with horizontal and vertical lines that softly transition from one to the other and are backed by a diamond pattern that’s indirectly illuminated.

Audi emphasizes a horizontal interior design theme. In autonomous mode, the lack of a steering wheel and pedals creates a feeling of openness, especially with a generous glass area, large windshield, and a transparent roof. The front seats have been turned into the new executive seats. They can be set upright for driving or tilted 40 degrees to allow passengers to relax. You can also recline it to 60 degrees, putting the seat in rest mode. The two-position rear bench features a lounge-like appearance and has integrated armrests.

Unlike the skysphere concept, the grandsphere concept ditches screens inside the cabin. Instead, you get a mixture of wood, wool, metal, and synthetic textiles on every surface from the seat covering to the carpeting. Audi says it got these components from sustainable sources or is made from recycled materials. You won’t find any leather in the grandsphere concept since it was envisioned with the theme of sustainable luxury. The wood surfaces are also where the infotainment system is projected in autonomous mode. The controls are made up of a sensor bar under the projection to allow for quick changes between media and navigation. There are also a set of rotary rings and buttons that let you control the user interface. If the occupant reclines the seat, they’ll be able to use those controls via gestures or integrated control panels.

Underpinning the Audi grandsphere concept is the Volkswagen Group’s Premium Platform Electric or PPE architecture. This was developed specifically for battery-electric applications and features a skateboard-style layout. The 120-kWh battery backs two electric motors with a combined output of 710 hp and 708 lb-ft of torque. Like the e-tron GT, the grandsphere concept can DC charge at peak rates of up to 270 kW. That allows the car to charge from 5 to 80 percent in under 25 minutes or gain 186 miles in 10 minutes. According to Audi, the grandsphere concept can hit 100 km/h (62 mph) in around 4.0 seconds but its top speed has been limited to maximize overall driving range.

The Audi grandsphere concept uses a five-link front suspension optimized for battery-electric applications and a multi-link setup in the rear. Extensive use of aluminum keeps weight in check while rear-wheel steering keeps it maneuverable. A single-chamber air suspension with adaptive dampers offers high levels of comfort while keeping body motions in check. It also uses navigation data and a front-mounted camera to predict what the pavement will be like ahead. Electromechanical actuators further reduce pitching and plunging during braking and acceleration.

Coming in as the second in a lineup of three show cars, the Audi grandsphere concept previews future technologies that may pop up on future Audi models. Additionally, it’s a showcase of Audi’s idea of progressive luxury in the age of electrification and autonomous driving. Using digitalization and sustainability as some of its key themes, the grandsphere gives us a preview of things to come and how it will distinguish itself.